The major indexes in the U.S. have rallied after undercutting their June lows. While there is a scope for equities to continue higher toward their respective 50-day moving averages, those moves would simply be a repetitive pattern that has played out for most of 2022. Bulls will need to push through those levels to make a more convincing case, especially with volatility elevated. Commodities are holding support but are likely to be traded in consolidation in the near term. The 10-Year Note remains in a strong downtrend.

The S&P 500 is trying to rebound after trading below the June lows, which we highlighted as likely in this note two weeks ago. The index remains below the declining 50 and 200-day moving averages. There is a scope for a countertrend move toward the 3,900-4,000 zone, where the real test will begin for equity bulls. The 14-day RSI is holding in a bearish regime, confirming bearish price action. 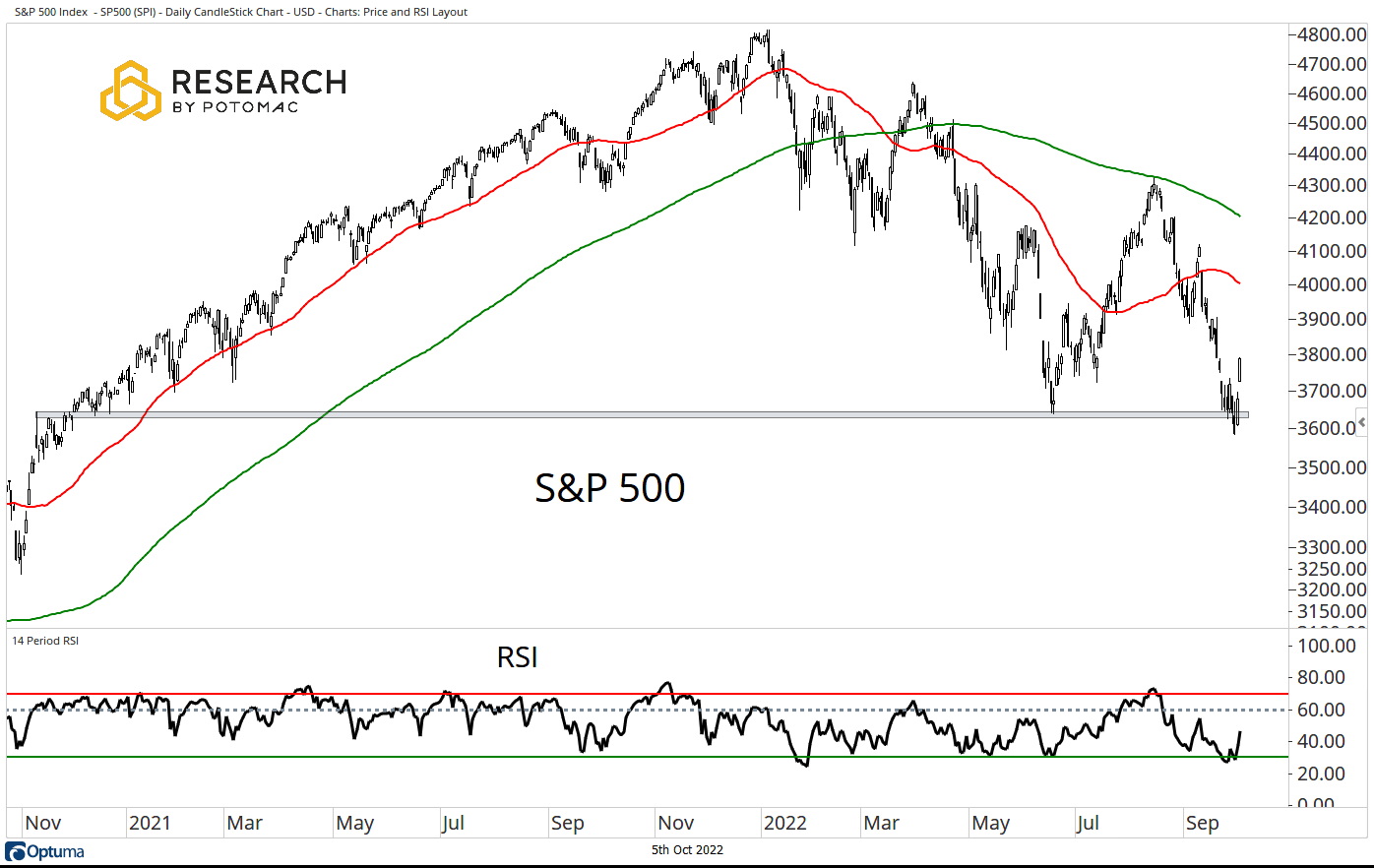 The S&P Small Cap 600 remains below its 50 and 200-day moving averages as it grapples with support near 1,100. The 14-day RSI is bouncing back from oversold levels but is holding in a bearish regime. There is scope for a near-term rally toward the 50-day moving average, but it is hard to make the case that it is more than a countertrend in nature at this point.

The relative trend remains neutral, fighting with the 50-day moving average. However, there is a slight downside bias as recent peaks have culminated in lower highs. 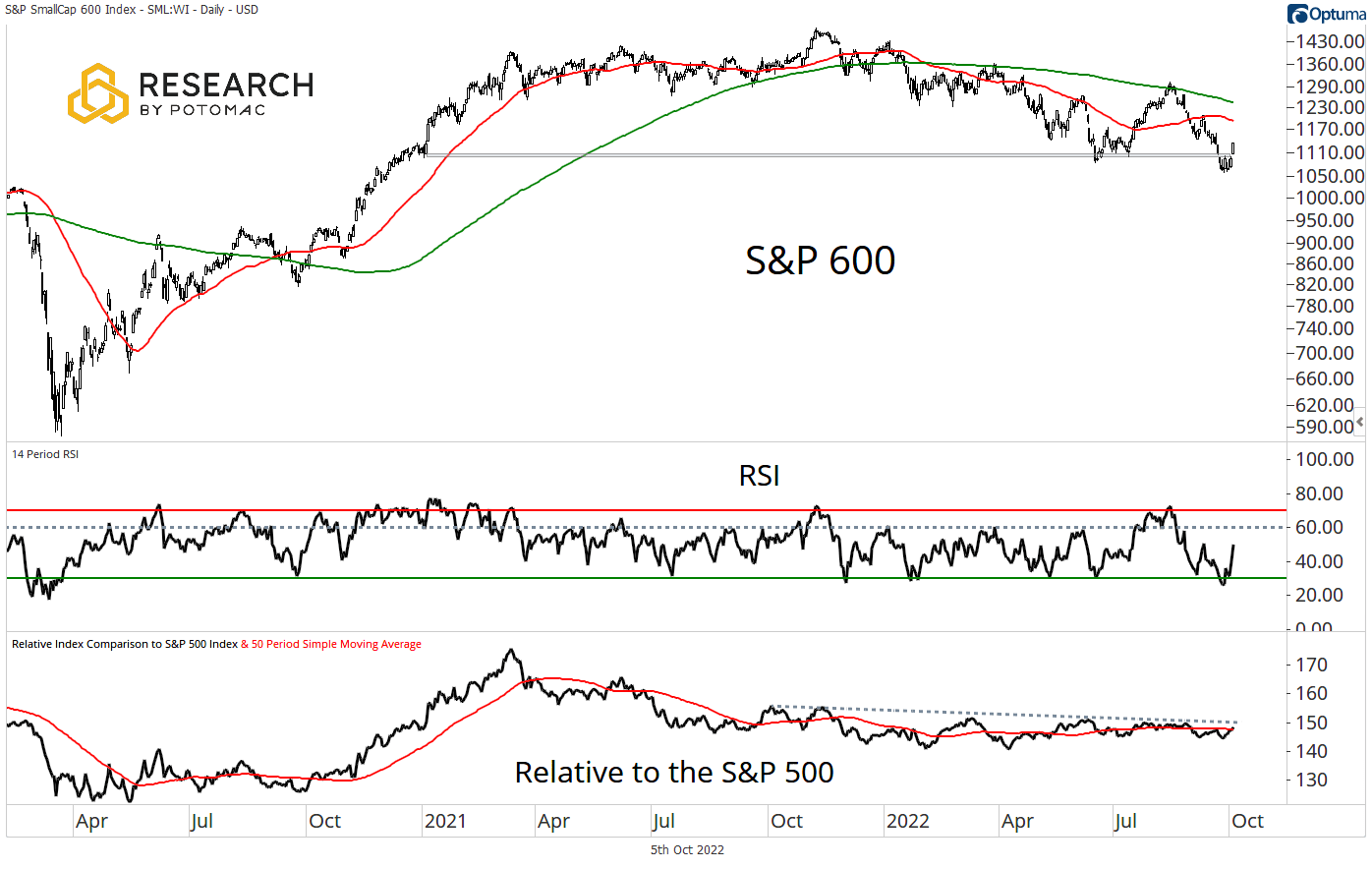 The NASDAQ 100 is also rebounding from support near the June lows while trading below the declining 50 and 200-day moving averages. We are open to the idea of a countertrend rally that takes the index back toward 12,000. However, momentum remains in a bearish regime, with the 14-day RSI below 60.

Relative to the S&P 500, the NASDAQ 100 remains below the 50-day moving average in the downtrend that began in November. 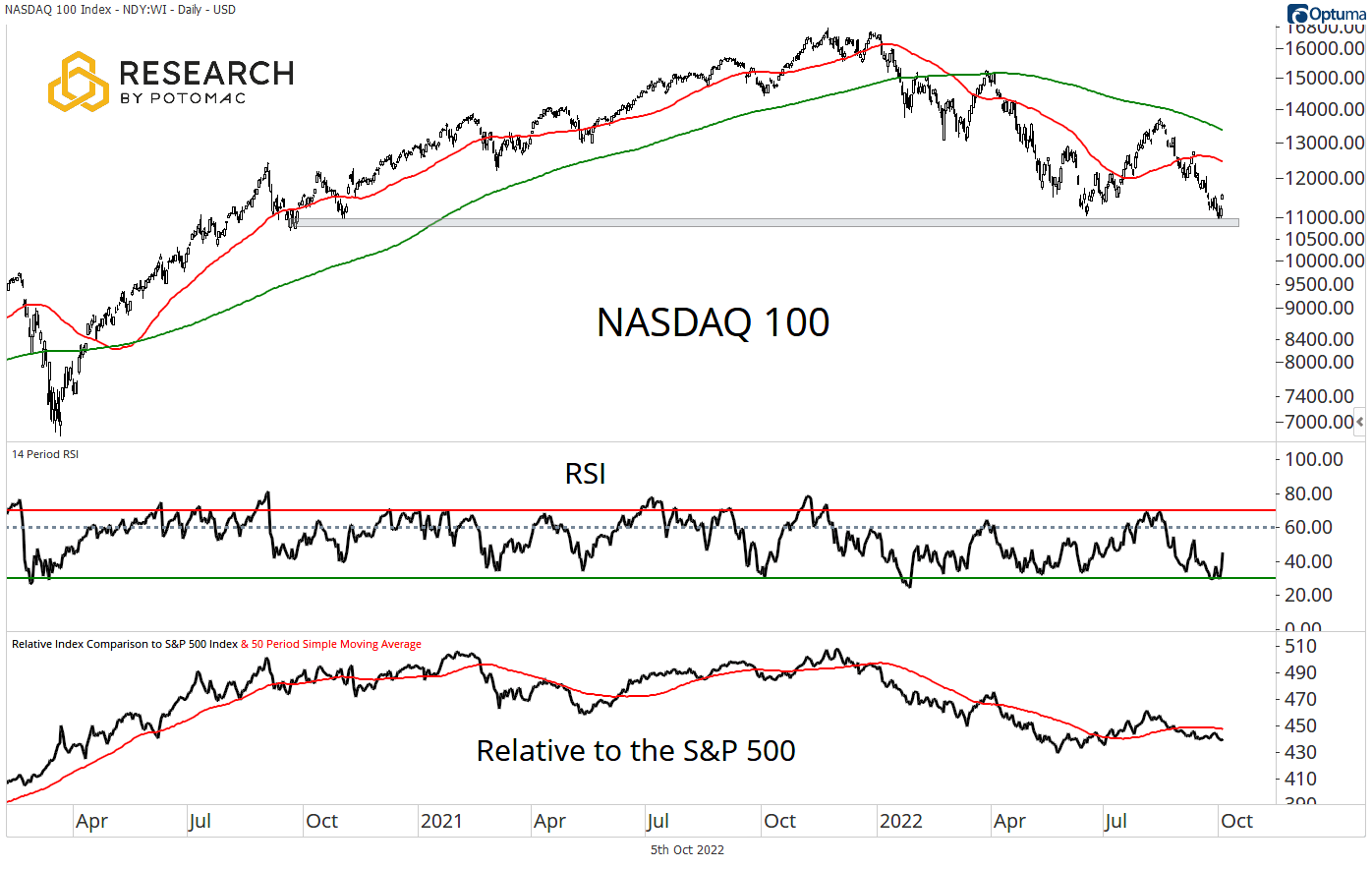 The 10-Year Note has also moved higher over the past week, continuing the trend of moving with equities that we have been highlighting for much of the year. The Note remains below the June lows and the declining 50 and 200-day moving averages. The 14-day RSI is in a bearish regime and has not been overbought since March 2020. 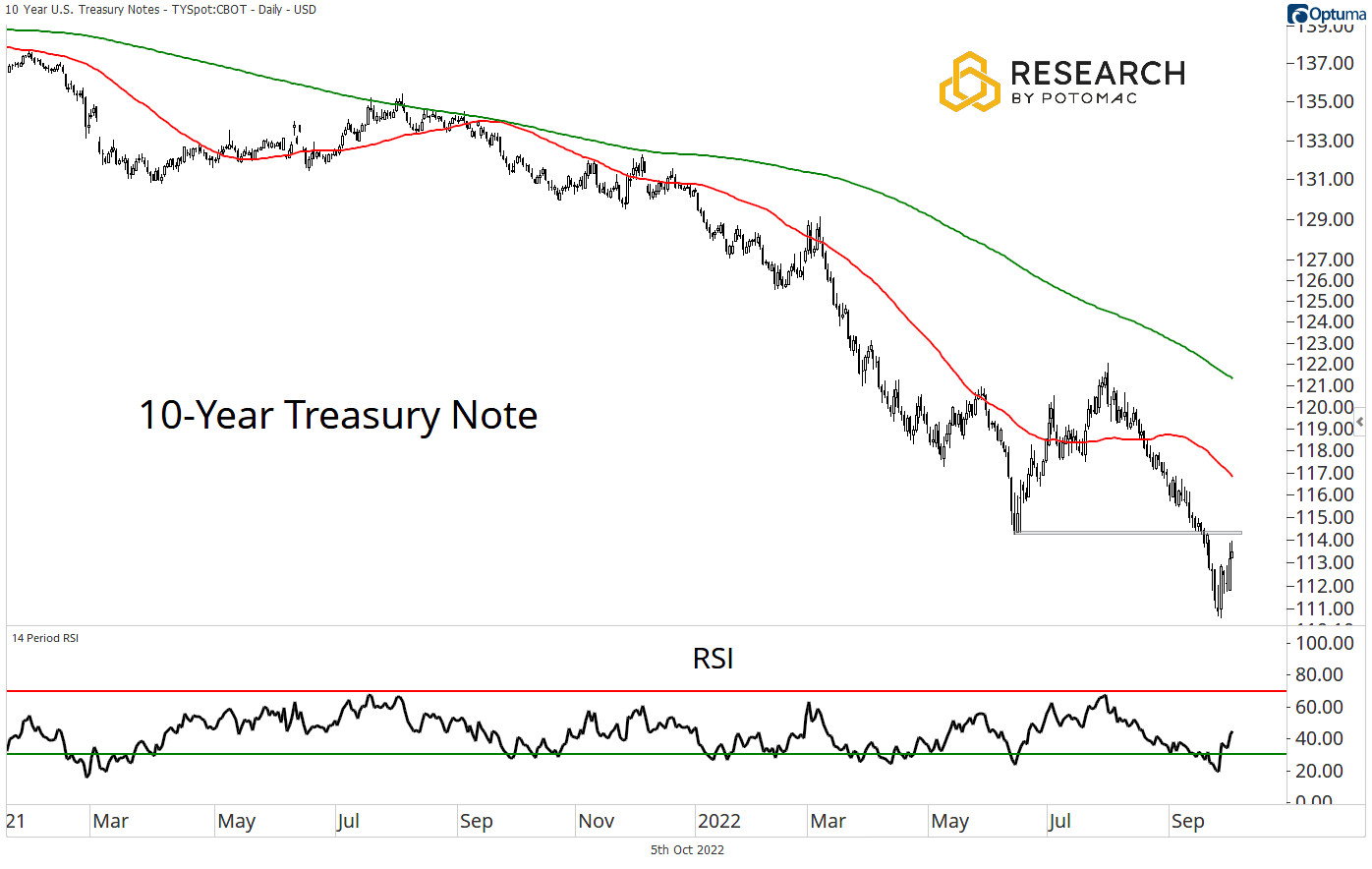 The Bloomberg Commodity Index has reached the top end of the 106-110 support zone that we called out as important in this note two weeks ago. The index remains in consolidation below the 50 and 200-day moving averages, as the former undercut the latter. The 14-day RSI is moving higher from oversold levels. It would not be a surprise to see trading remain choppy in the near term, but the larger bullish trend from the 2020 lows remains in place. 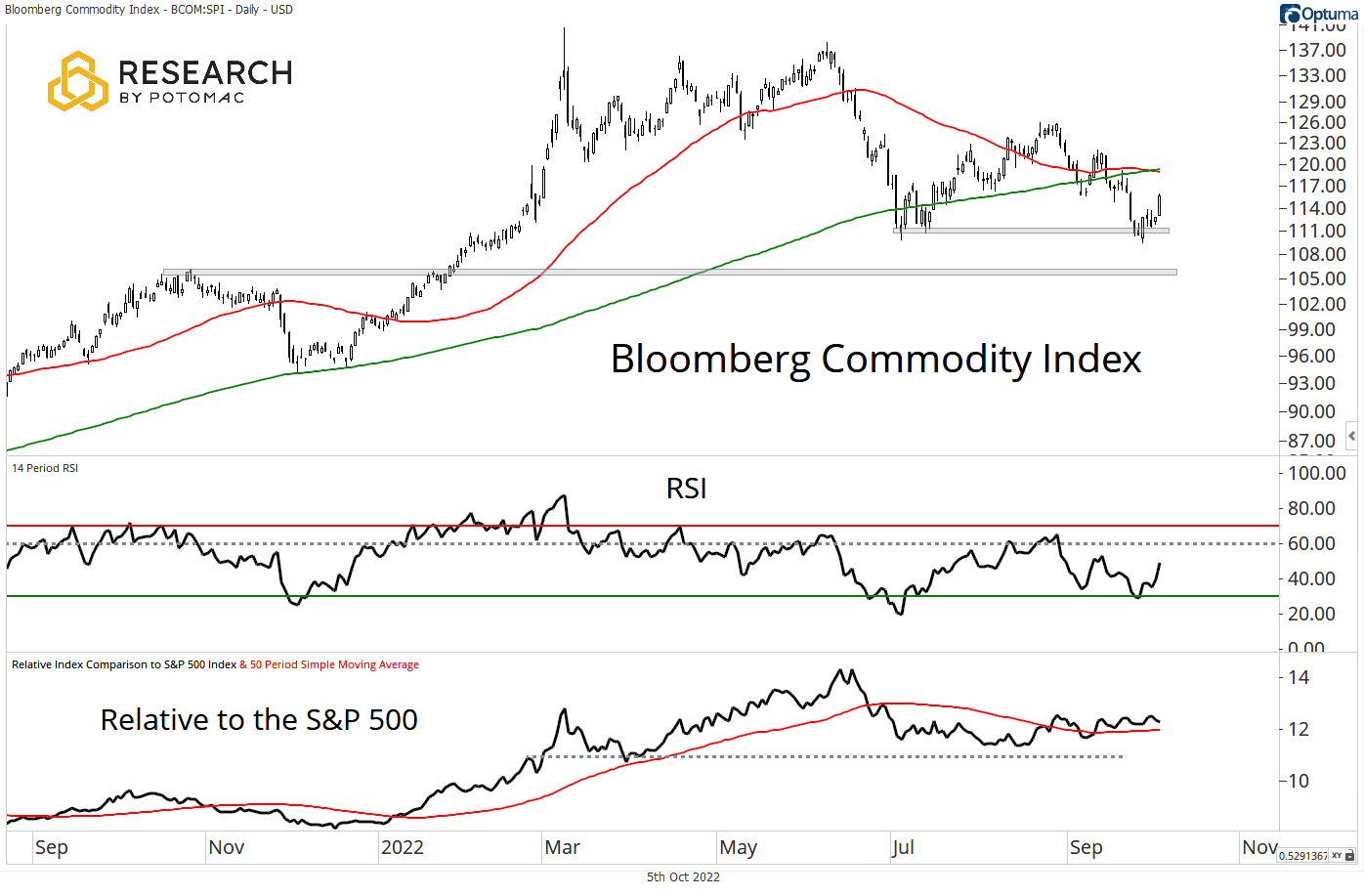 The CBOE S&P 500 Volatility Index (VIX) has finally moved below its 10-day moving average but continues to trade at elevated levels. This year can be classified as a high volatility regime, and there are no indications that it is changing in the near term. 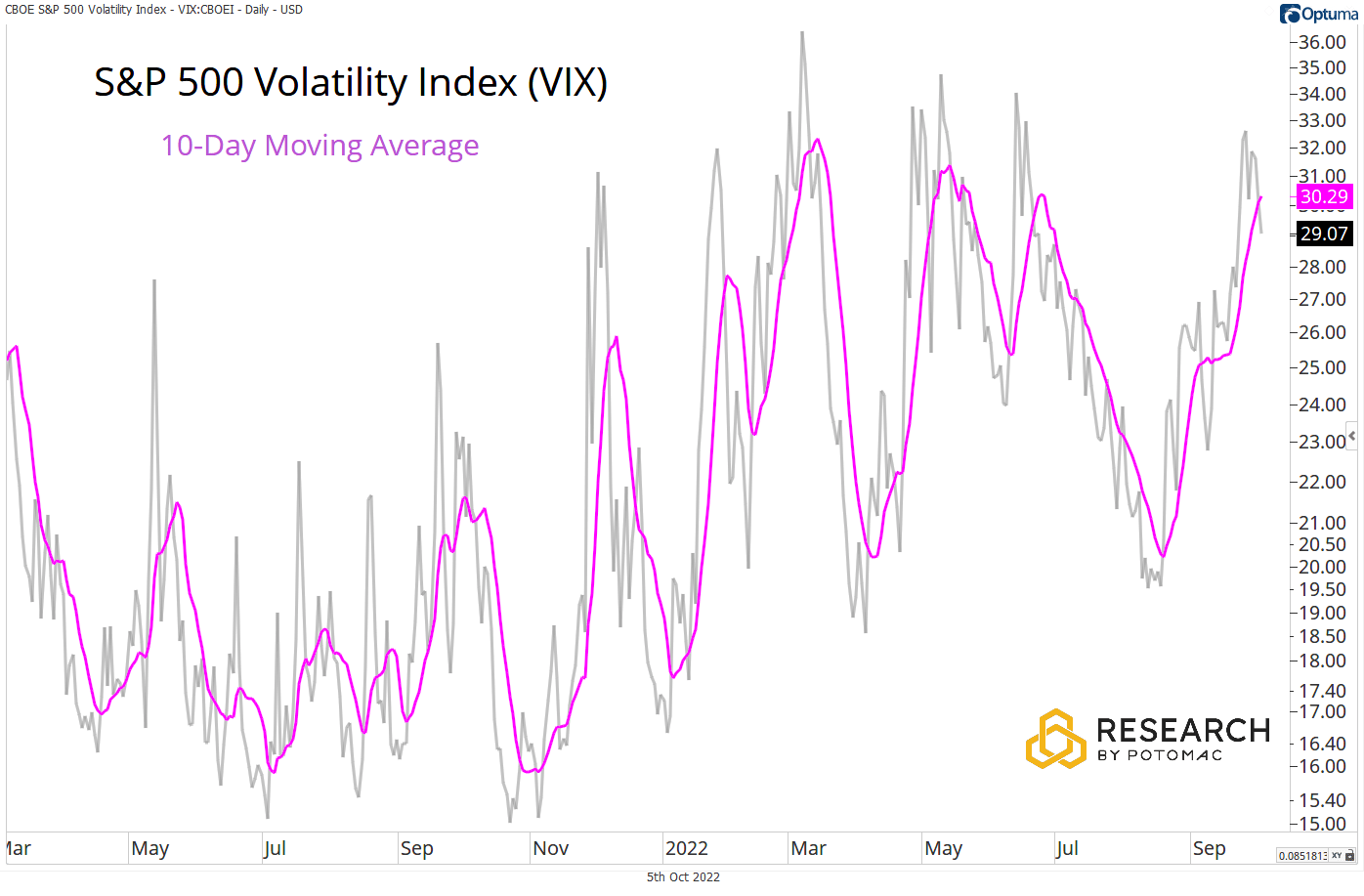 ATRs remain elevated across timeframes as well. The short and intermediate-term metrics are trading below the June highs, a small positive. The longer-term metric remains in a steady uptrend from the November lows. 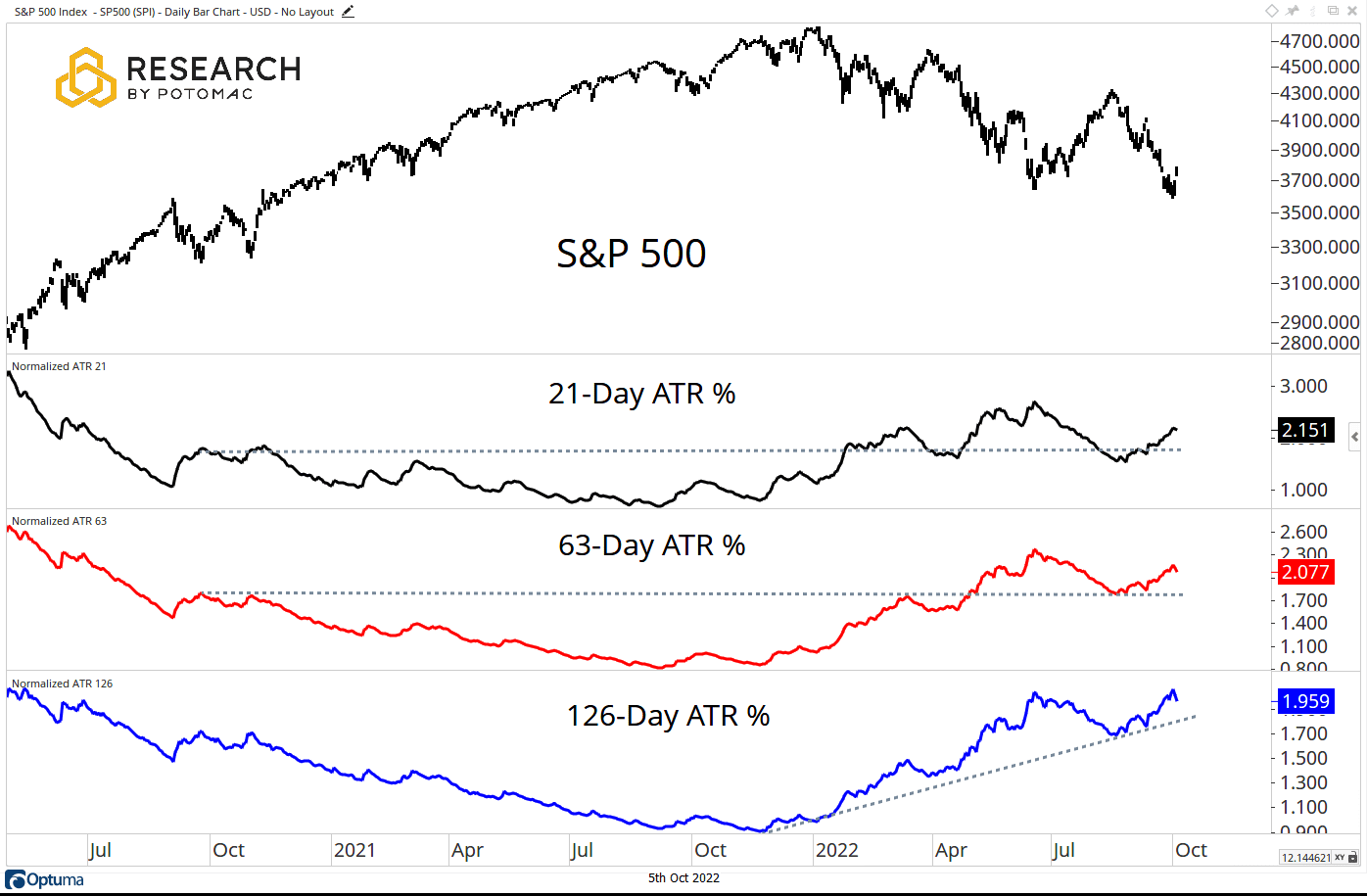 Potomac Fund Management ("Company") is an SEC-registered investment adviser. This information is prepared for general information only and should not be considered as individual investment advice nor as a solicitation to buy or offer to sell any securities. This material does not constitute any representation as to the suitability or appropriateness of any investment advisory program or security. Please visit our FULL DISCLOSURE page. The company does not make any representations or warranties as to the accuracy, timeliness, suitability, completeness, or relevance of any information prepared by any unaffiliated third party, whether linked to the Company website or incorporated herein, and takes no responsibility for any of this information. The views of the Company are subject to change and the Company is under no obligation to notify you of any changes. Different types of investments involve varying degrees of risk, and there can be no assurance that the future performance of any specific investment or investment strategy will be profitable or equal to any historical performance level.