Equities Stall but the
Long-Term Trend is Bullish 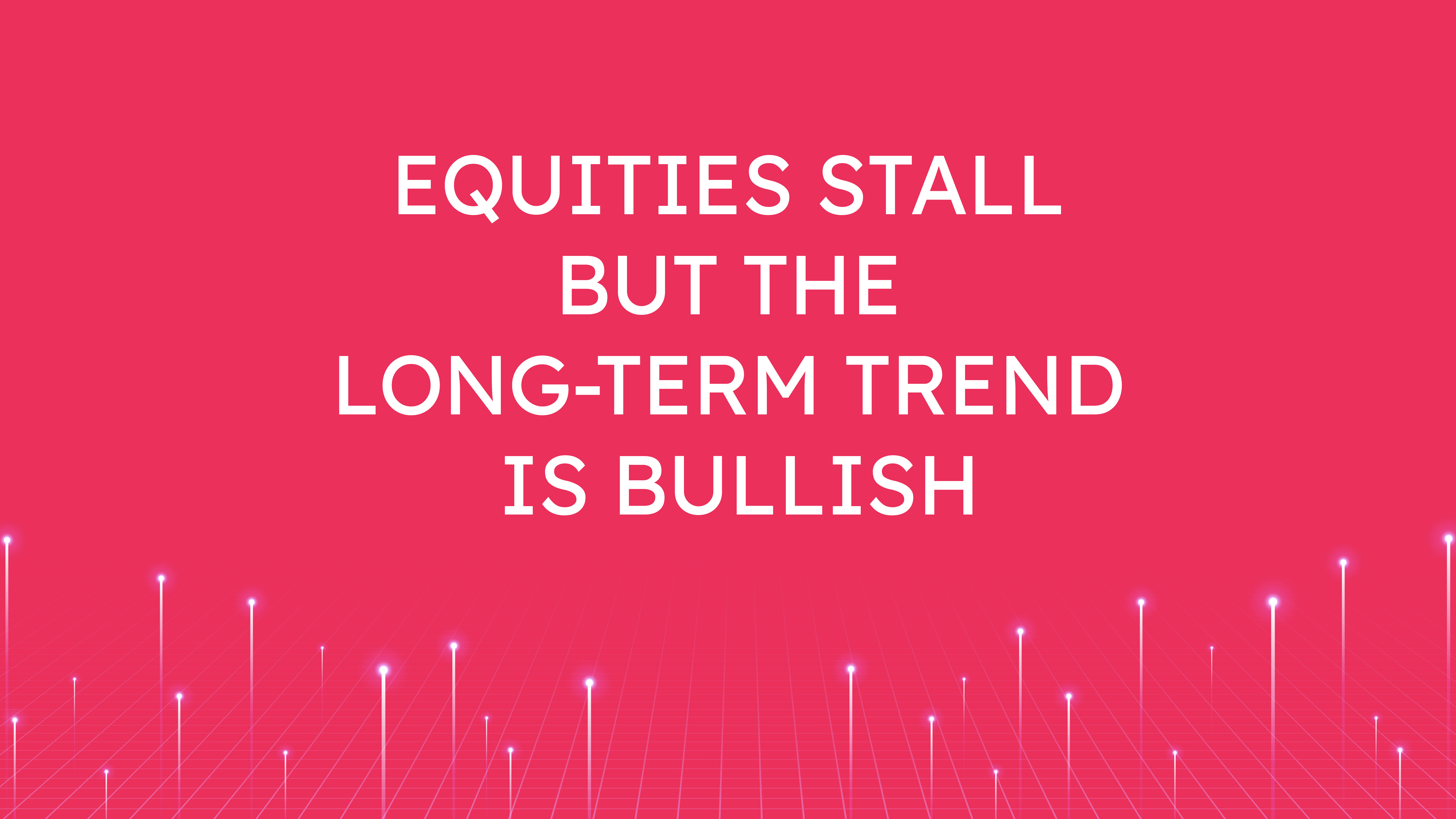 The S&P 500 traded to a record high last week but ultimately finished in the middle of the weekly range. The uptrend from the March 2020 low remains in place as the index is above the rising 10 and 40-week moving averages. Near-term support is at the 4,250 level, while longer-term support is in the vicinity of the of the 40-week moving average, in the 3,900 – 4,000 zone.

The 14-week RSI is holding near overbought levels, a sign that momentum remains to the upside. 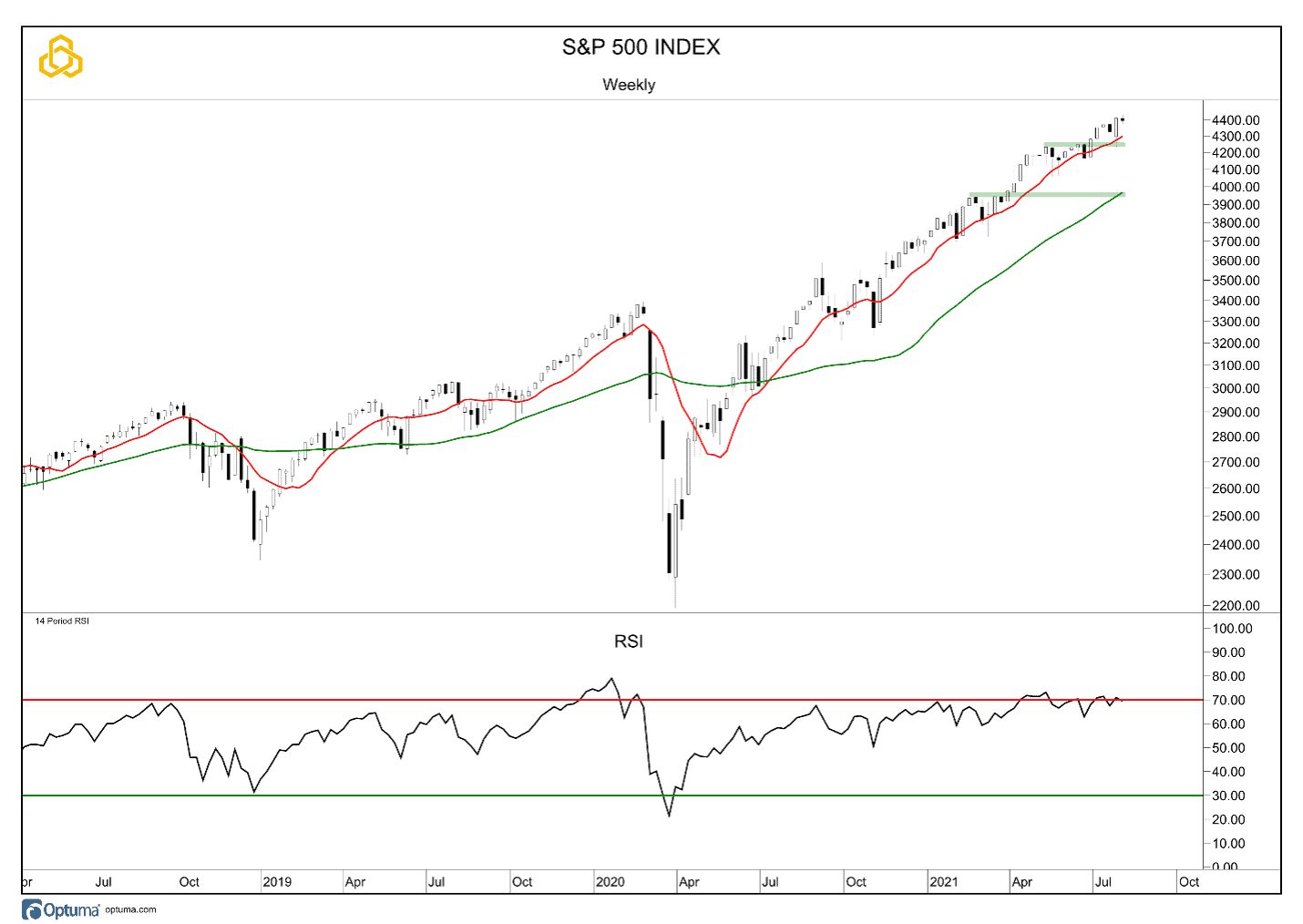 After holding support during the previous week, the S&P Small Cap 600 closed higher last week to remain above the rising 40-week moving average. The index remains in a consolidation zone below the 10-week moving average, with price-based resistance near the top of the consolidation. Thus far, the 14-week RSI has remained in a bullish regime as the recent low has not broken below the 40 level.

On a relative basis, Small Caps continue to trade below broken support (now resistance?). The group was a slight outperformer last week, a step in the right direction which would also go a long way in improving the bearish breadth dynamics currently playing out in the overall equity market. 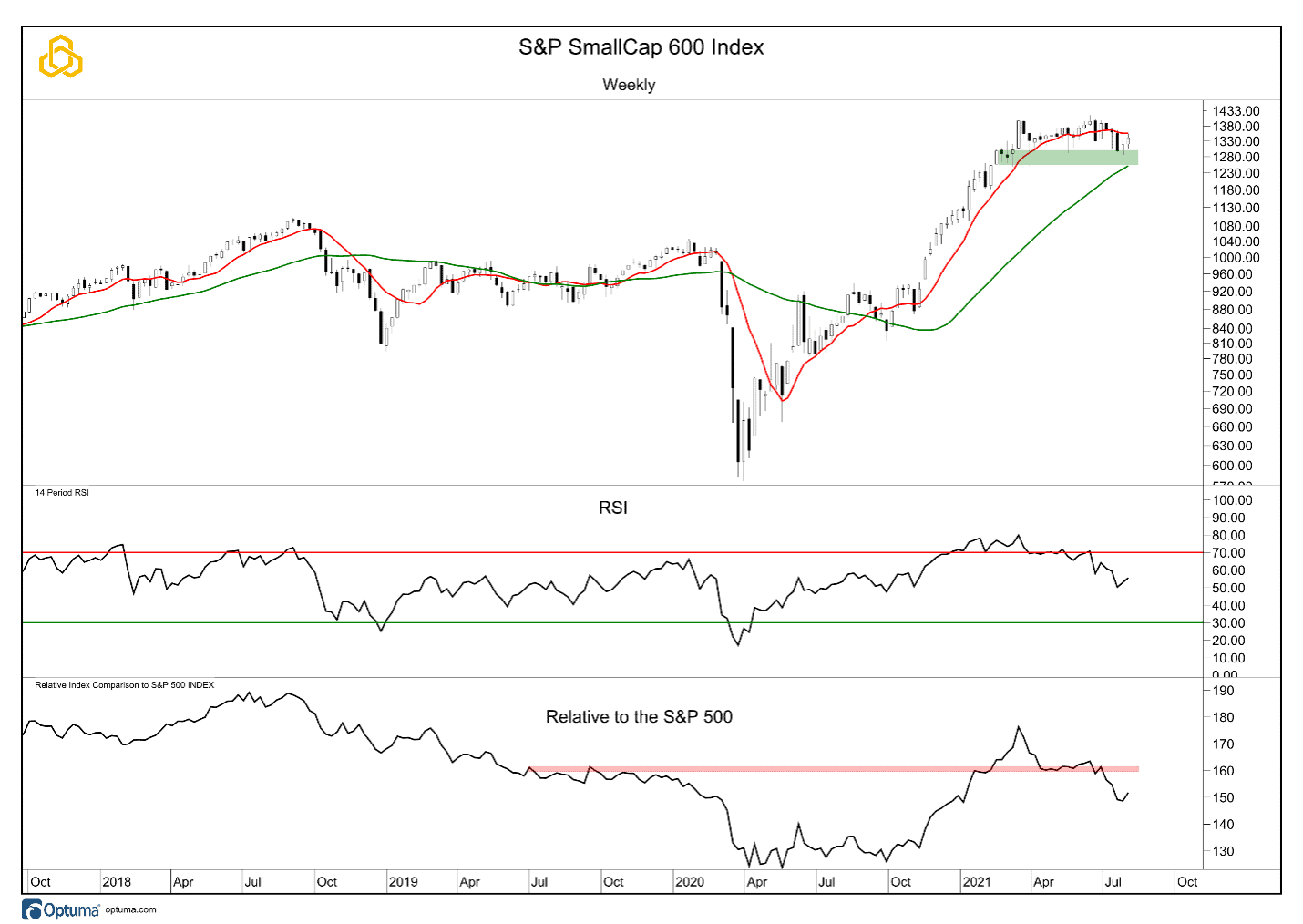 Four sectors within in the Small Cap landscape that stood out last week were: 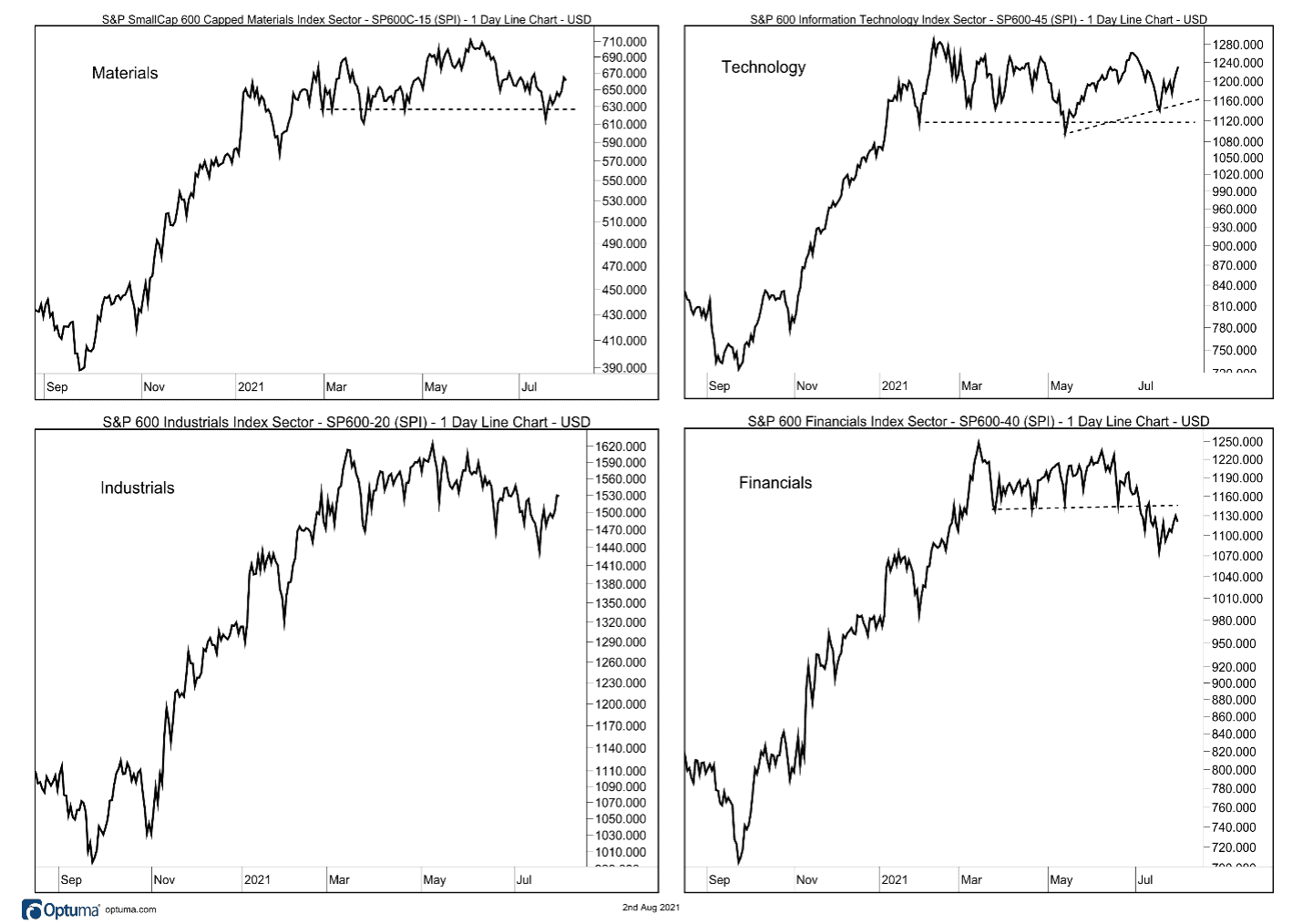 The NASDAQ Composite Index exhibited a bit of stalling action last week. The index remains near record levels and above the rising 10-week moving average after breaking from the consolidation zone four weeks ago. The 14-week RSI is near overbought levels, but as we noted last week this indicator did not confirm the record highs that were recently set.

On a relative basis, the NASDAQ is also stalling. The ratio remains above support but has made little progress over the past few weeks. 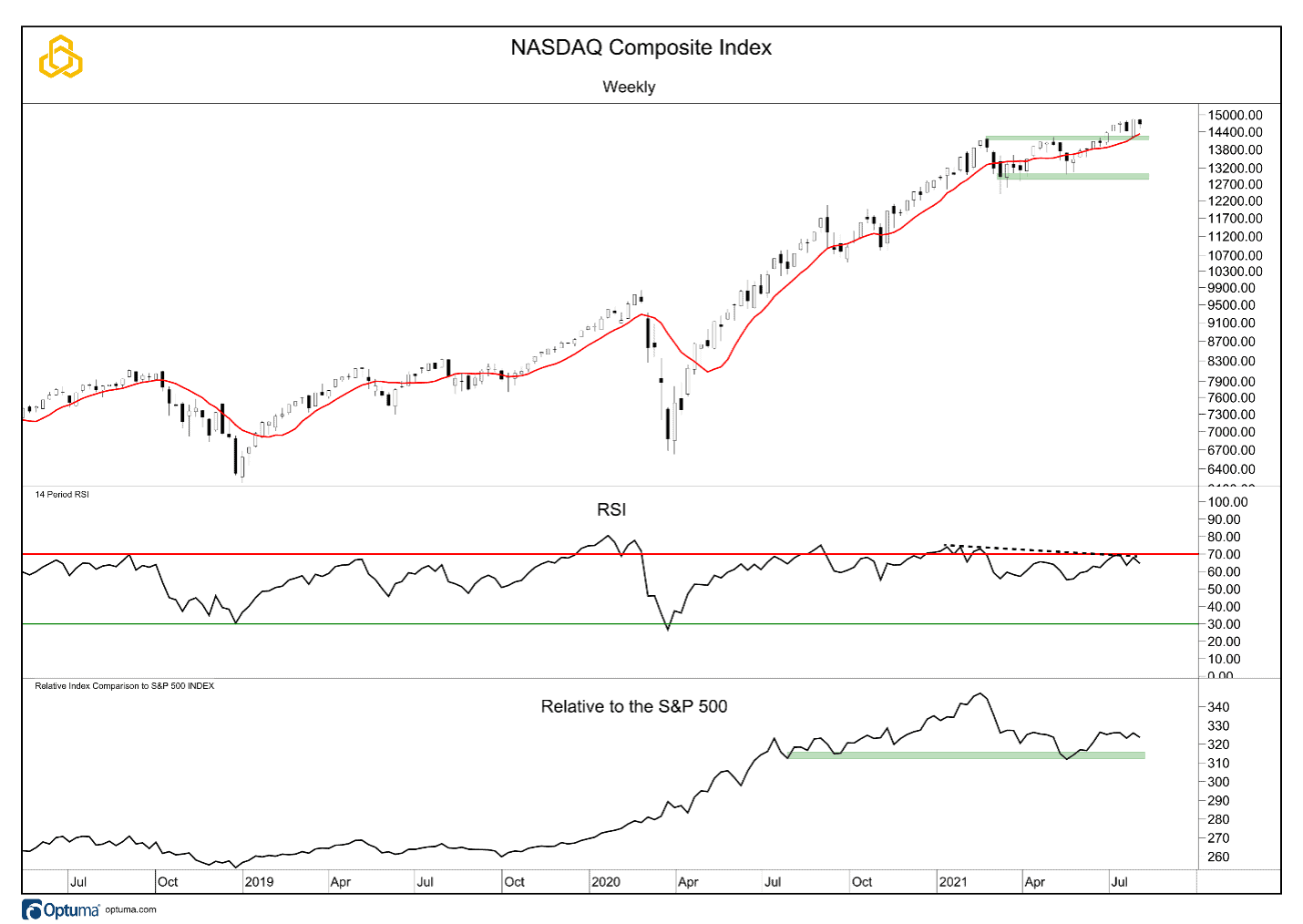 The 10-Year Note traded higher last week, sending yields slightly lower, as support at the $134 breakout level continues to hold. At the same time, resistance from the declining 40-week moving average also held last week, keeping the note in a tight range. The 10-week moving average is also converging on the support level from below. With the moving averages continuing to move toward support, we are likely nearing an inflection point for price.

The 14-week RSI is moving higher after breaking its downtrend, perhaps providing a clue as to which way price will break. 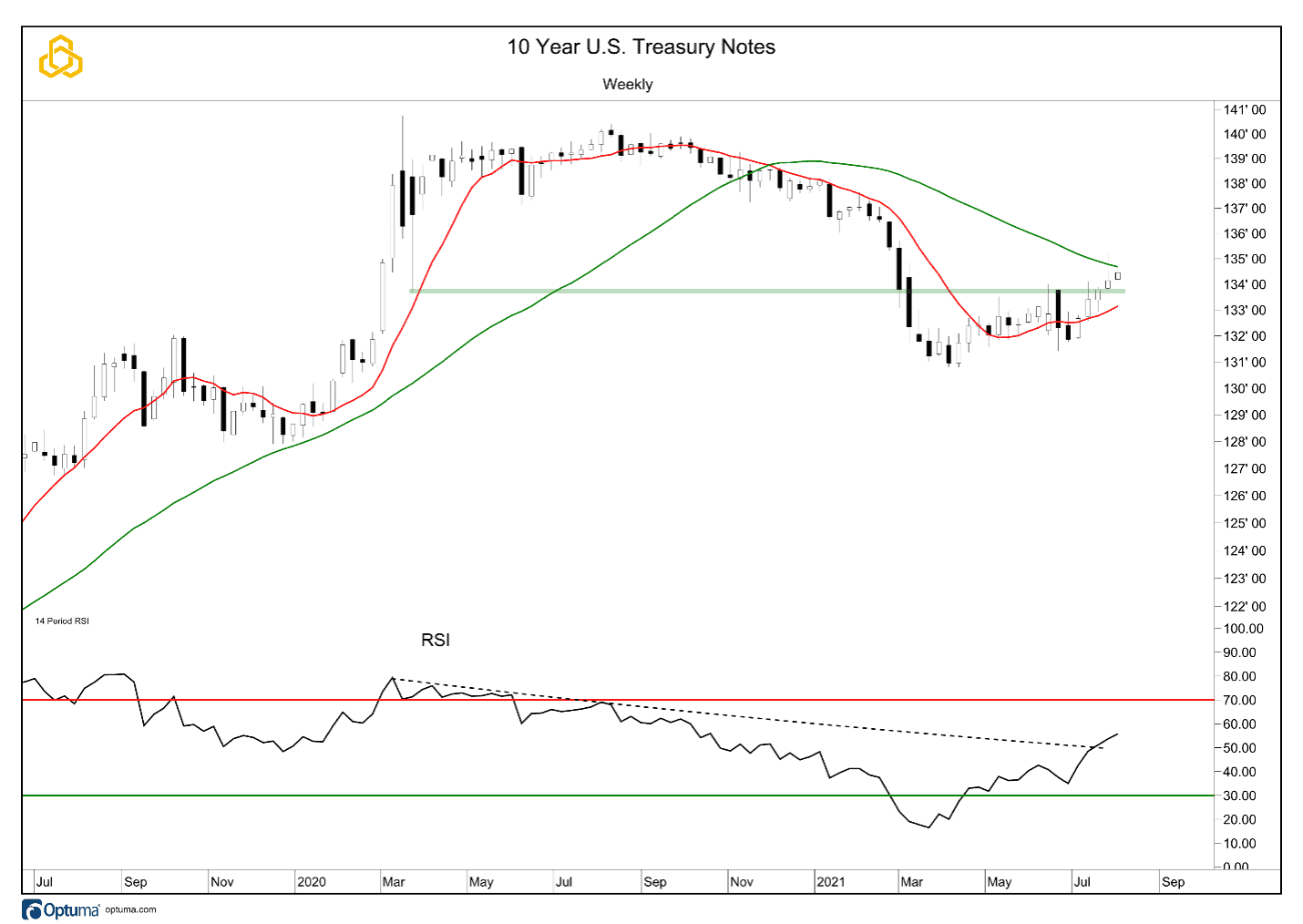 Across the curve, the trend in yields remains to the downside but with some stabilization of late. Despite a near-term stall in their downtrends, none of the timeframes seen here have made a higher high that would point to a reversal of the prevailing trends. 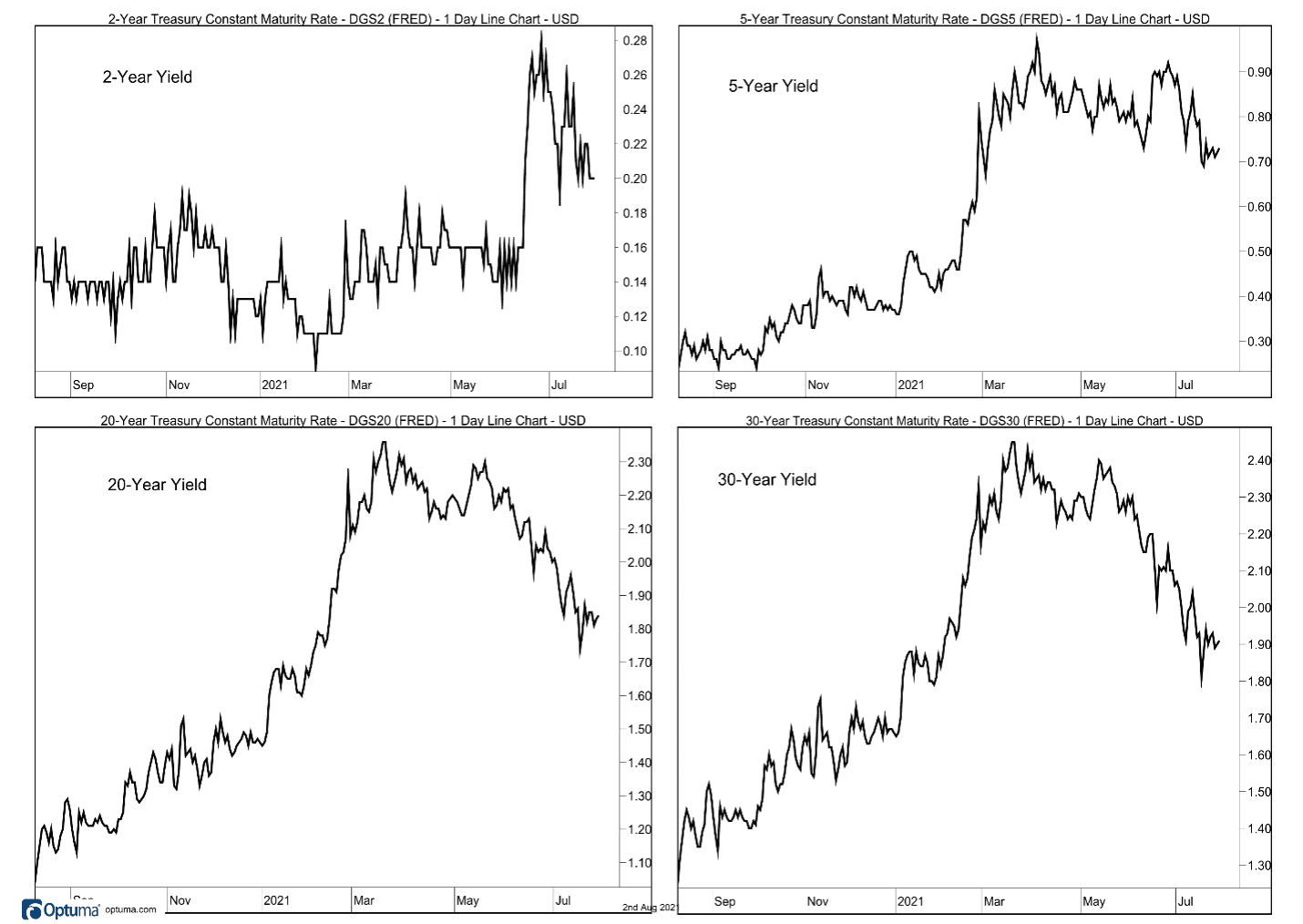 After a valiant effort to rebound from its uptrend line during the previous week, last week saw the Global Dow rise to the declining 10-week moving average where it met resistance. After becoming overbought in April, and holding that position until June, the 14-week RSI has pulled back with price over the past six weeks. However, the indicator remains in a bullish regime.

The relative trend saw a slight rebound last week but remains below resistance. 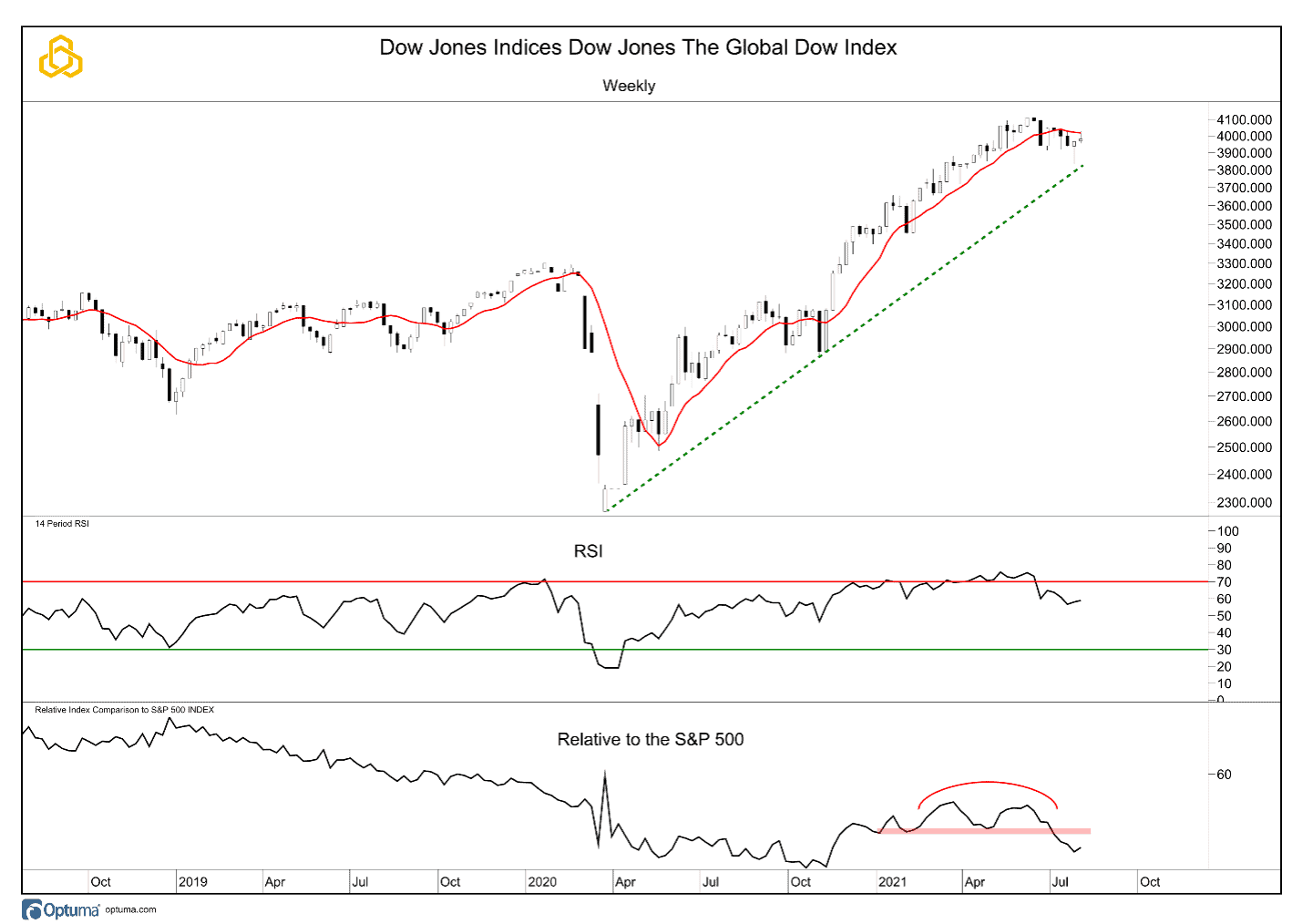 Unlike equities, the Bloomberg Commodity Index did close at a record weekly high last week, above the rising 10-week moving average. Support remains at the breakout level, above the 2018 highs. We do note that the 14-week RSI has failed to confirm the record highs seen by the index, but this divergence is simply a yellow flag until price-based support is broken.

On a relative basis, Commodities are building a base vs. the S&P 500 but have not been able to maintain much in the way of upside momentum. 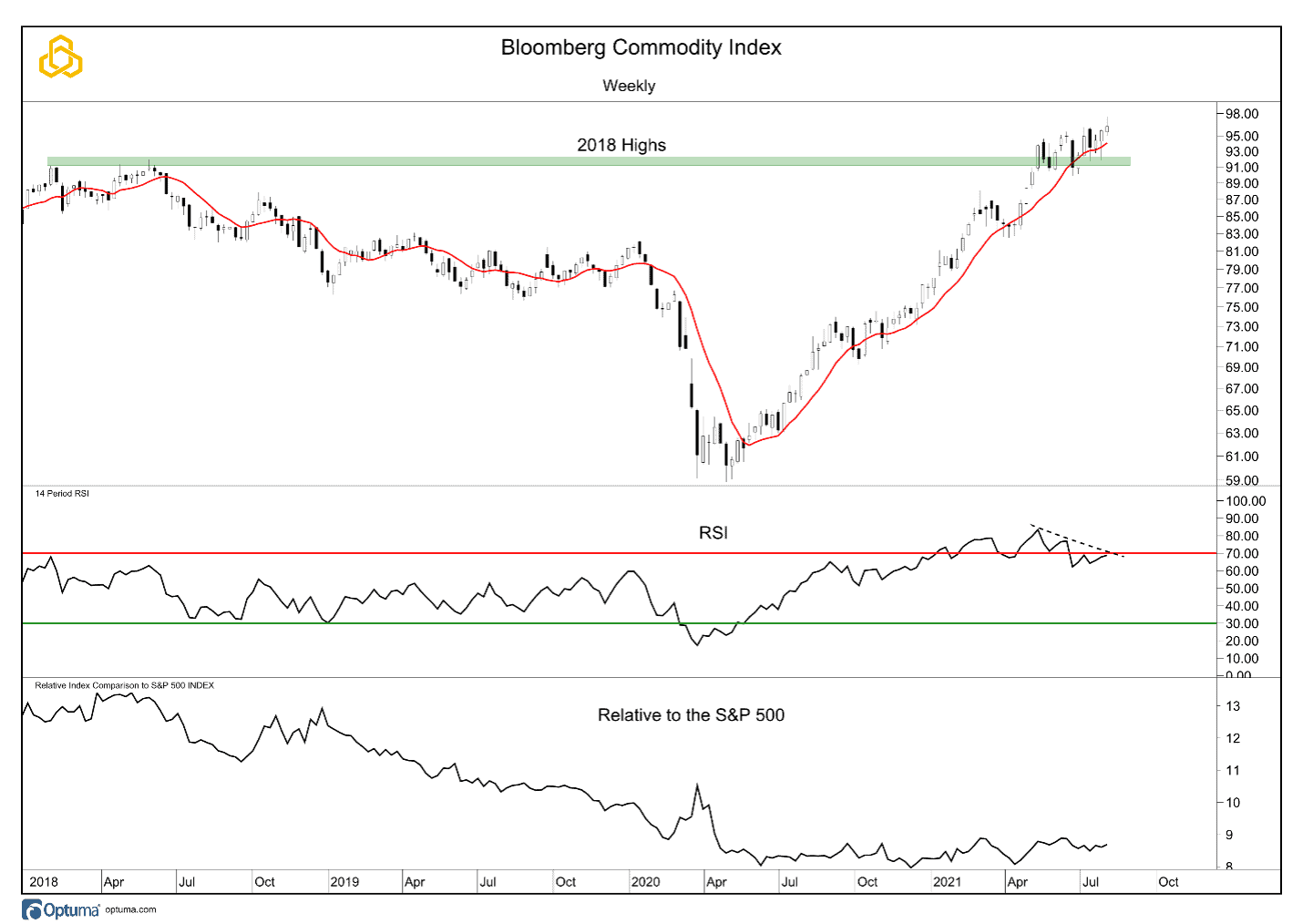 Drilling down on the commodity complex, Industrial Metals and Energy are threatening breakouts after short-term consolidations. Precious Metals are attempting to reverse their downtrend and can best be described as neutral currently. Agricultural commodities are hitting resistance after a rebound from recent lows. 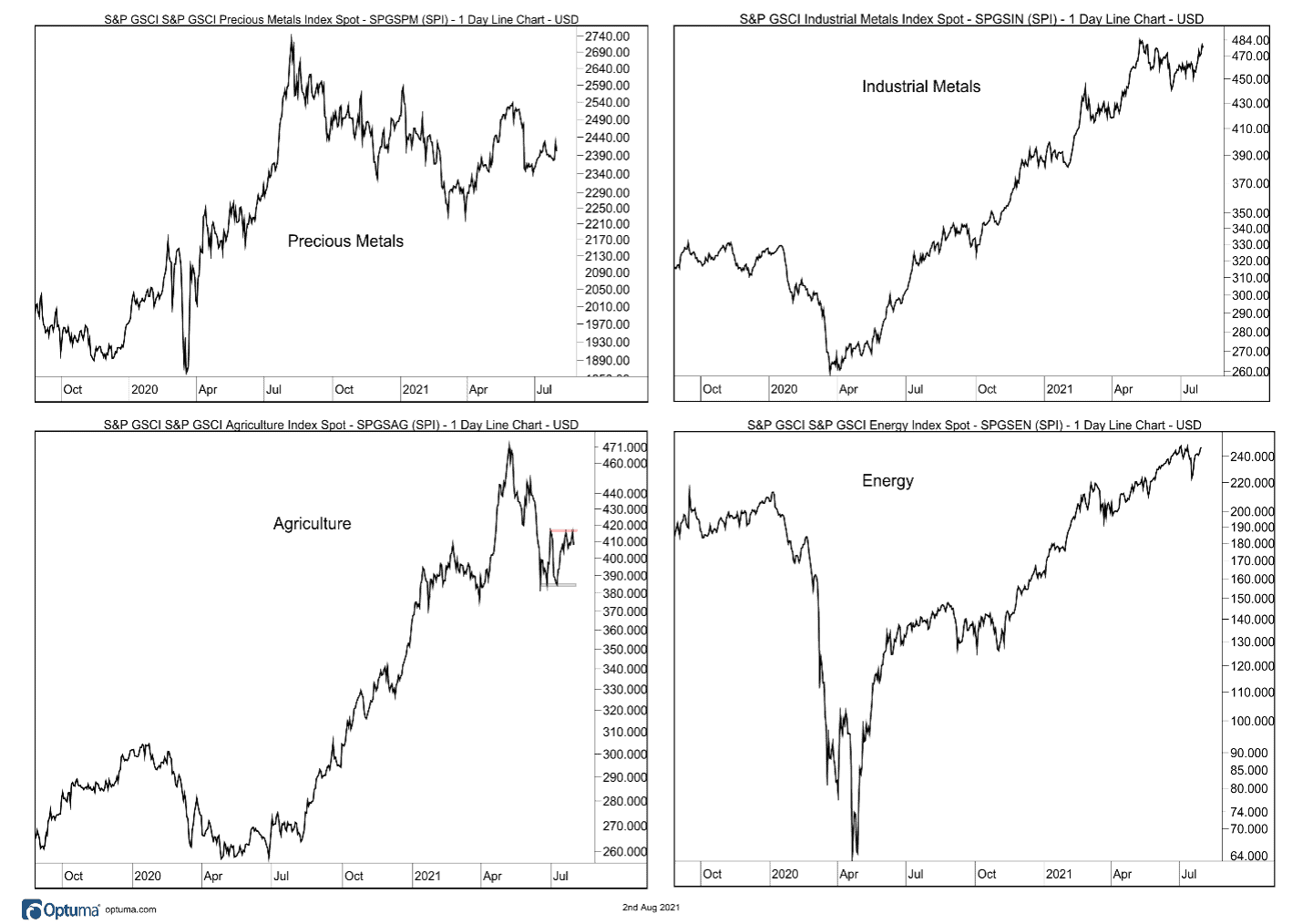 The U.S. Dollar Index came under intense pressure last week, fading from the highs that were reached in April. To the extent that the greenback is seen as a haven asset, last week’s weakness could be a sign that investors are showing an increased willingness to take on risk. The 14-week RSI is also beginning to fade after failing to break from a bearish range. Should weakness persist, support comes into play around the 2018 lows. 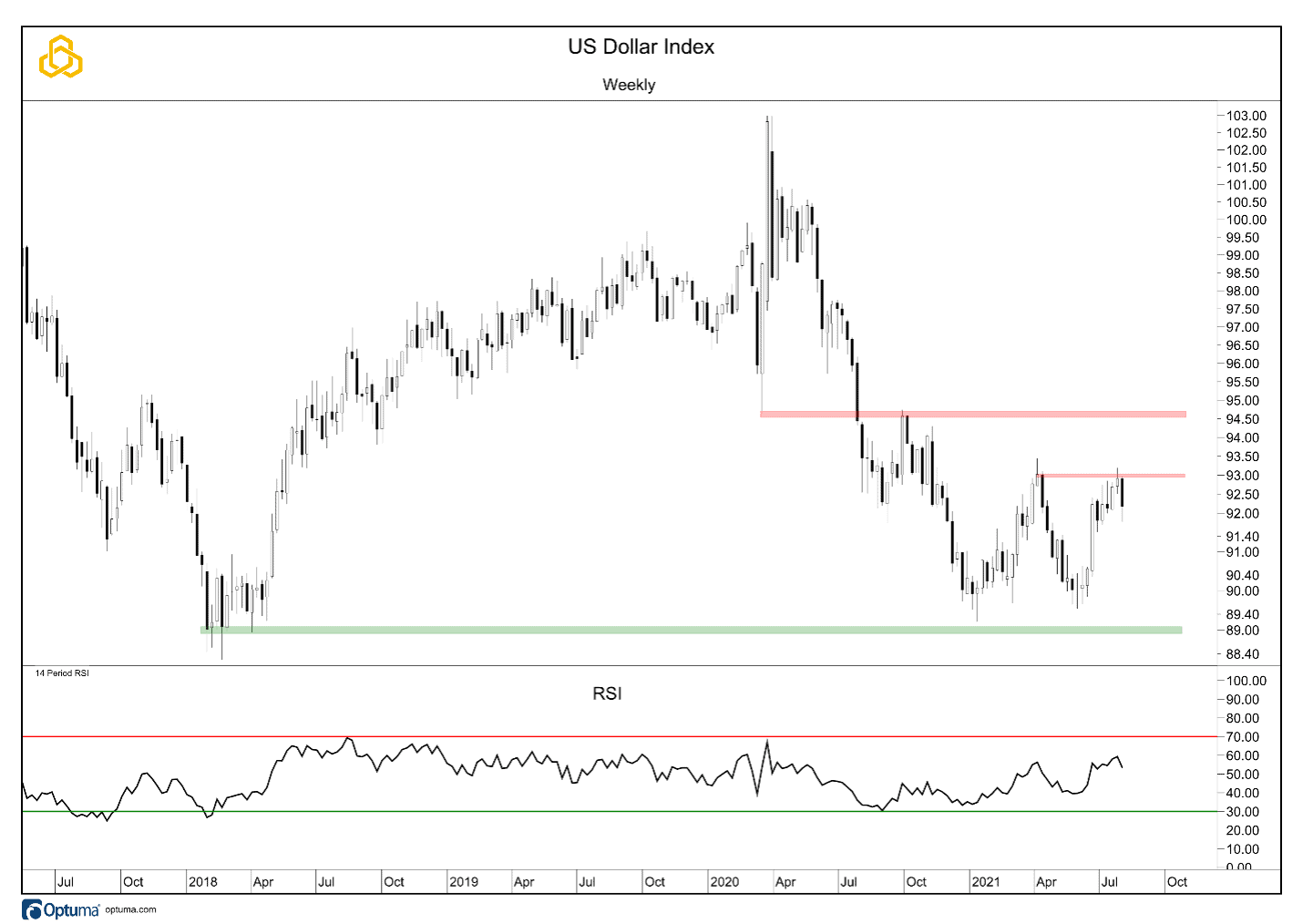 Equites exhibited some stalling behavior last week, but no damage was done to the prevailing, long-term uptrends. A continued rebound on the part of Small Caps as the Global stocks would be an encouraging development for equity bulls as it would point to an improvement in market breadth. Strength in commodities is noteworthy, as is the recent retreat in the U.S. Dollar. The biggest development this week may be how the 10-Year Note reacts as it nears an inflection point.