Equities, both in the U.S. and globally, stalled on the week but a closer look shows us that weakness was bought as a push to the downside gave way to closes near the tops of the weekly ranges. The 10-year yield is testing a key measure of trend. Commodities are strong in the near-term, led by Agriculture; will the group break out? The dollar may hold the answer to the commodity question, as it remains under pressure.

The S&P 500 closed slightly lower on the week, losing 13 basis points. The week ended on a bullish note Friday to keep the index within striking distance of record highs. The weekly RSI remains in an overbought condition, which is playing out within the context of a strong uptrend, as the S&P 500 trades above the rising 10-week moving average (red).

In the near-term, support comes into play near the 4,000 level, which lines up with the moving average. Stronger support for the uptrend from the 2020 low is near 3,700. 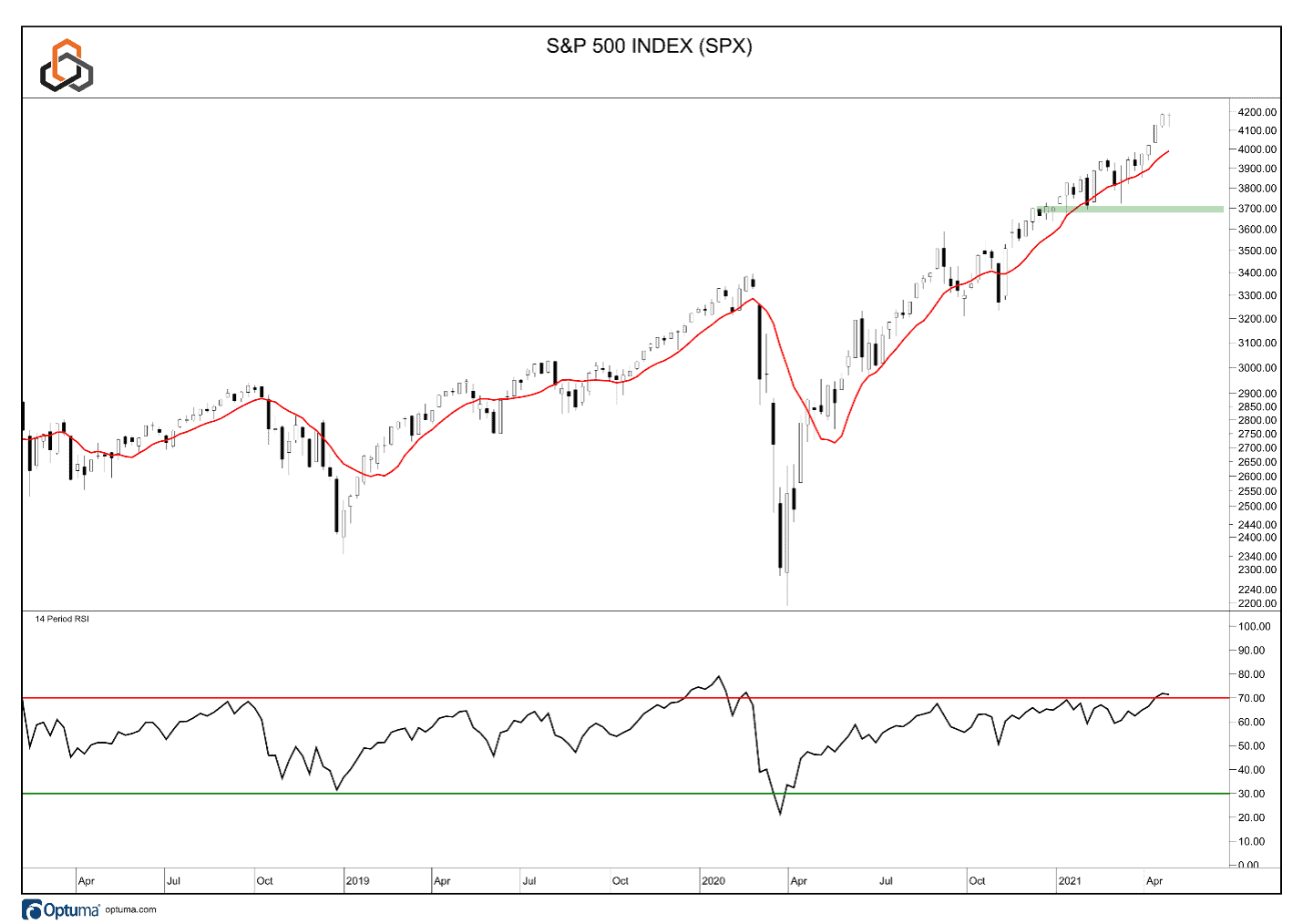 The S&P Small Cap 600 Index was a slight outperformer on the week, adding 16 basis points but remains in a consolidation below the highs that were reached in mid-March. Importantly, the index regained and closed above the rising 10-week moving average after a push below during the week. The RSI is hovering around the 70 level that marks overbought conditions. On a relative basis, Small Caps remain below resistance vs the S&P 500. 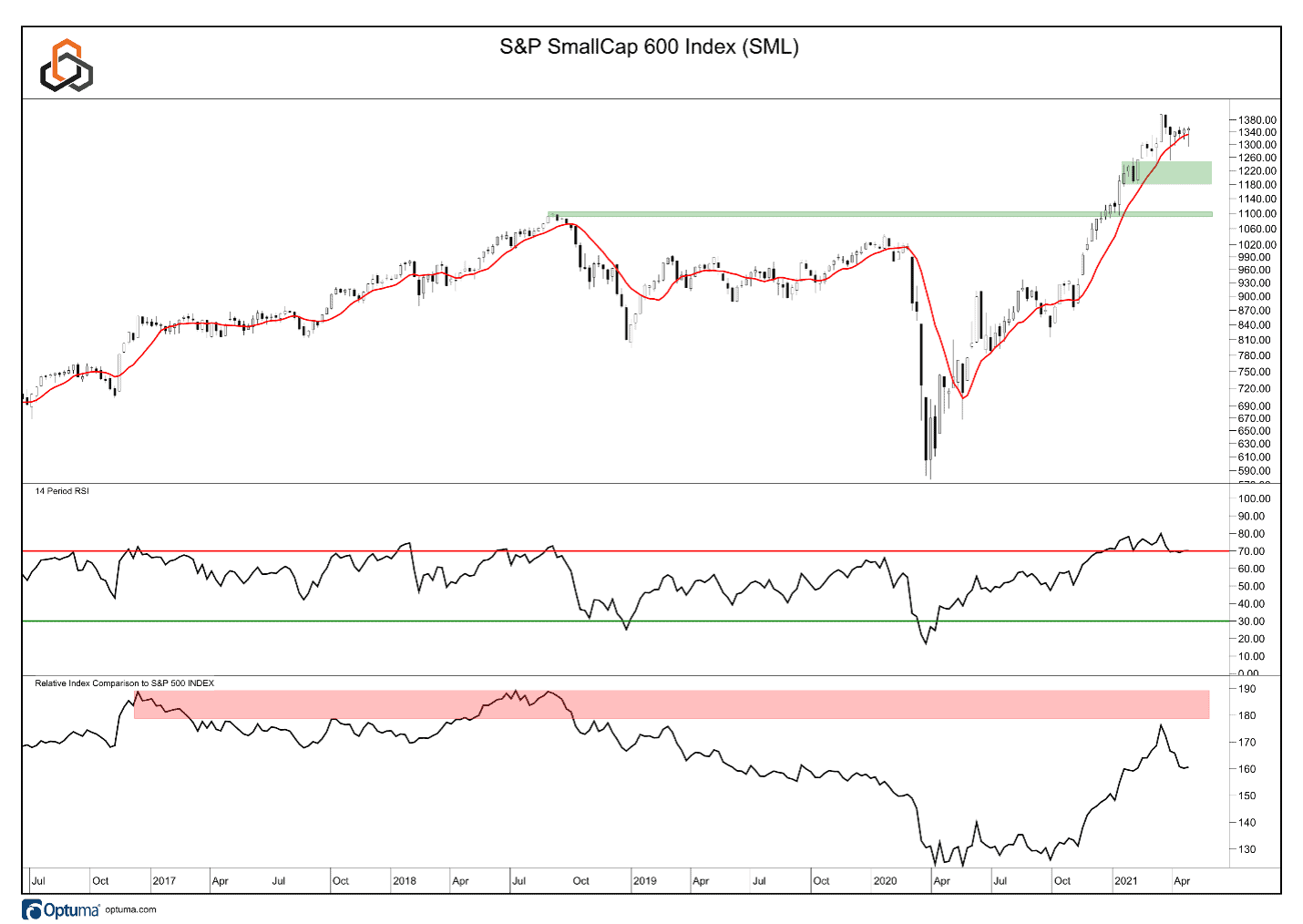 At the sector level within the Small Cap universe, Health Care was the best performer followed by Utilities, Financials, and Industrials. The daily charts show that all but the Utilities are in consolidations that roughly mirror that of the index itself. Thus far, those consolidations appear to be playing out as pauses within the context of longer-term uptrends. 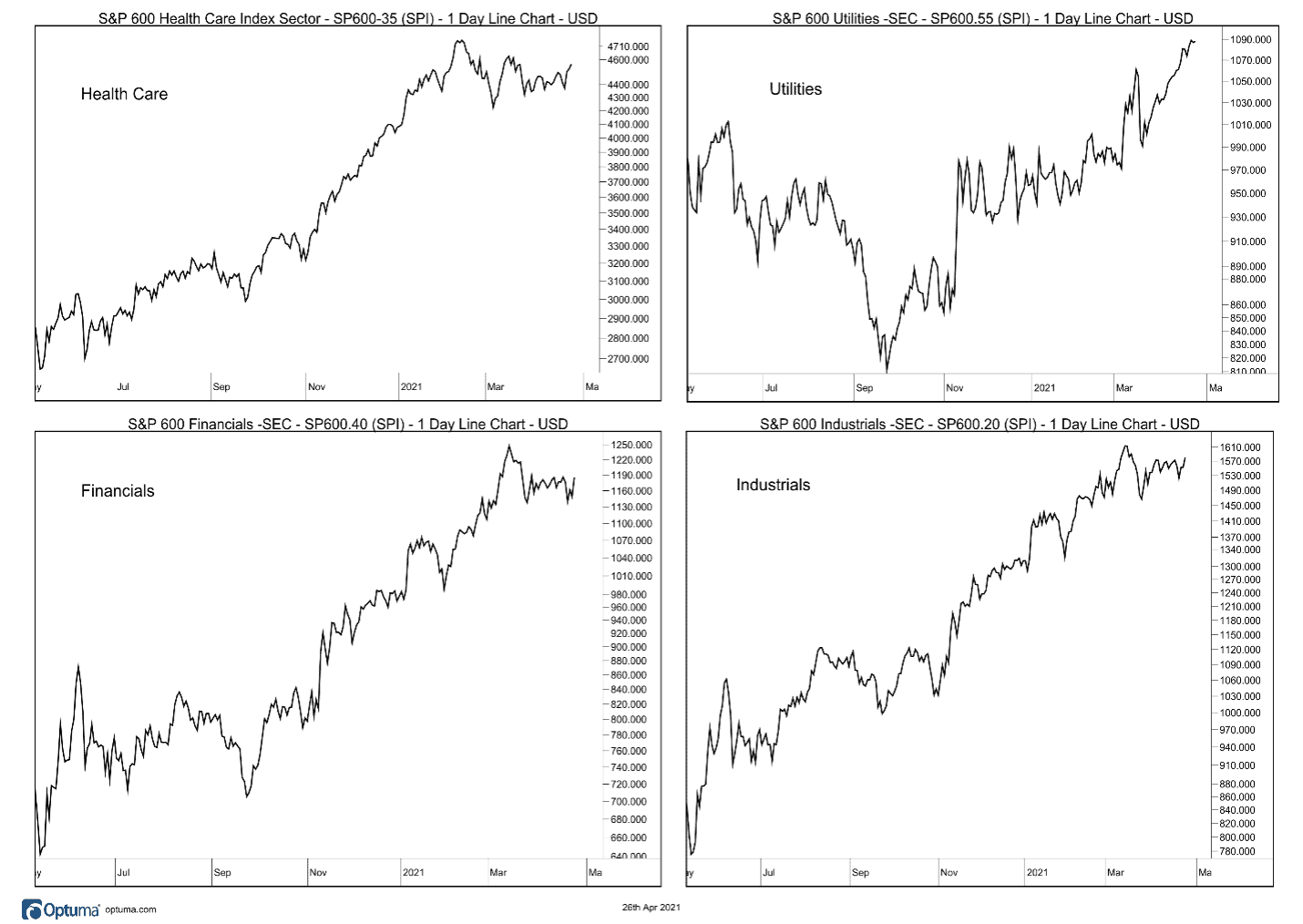 The Nasdaq Composite Index remains above the 10-week moving average and in the consolidation that has been playing out since the February peak. The 14-week RSI is holding in a bullish regime, just below the 70 level. Support remains in line with the September high and the March low, near 12,000.

On a relative basis, the NASDAQ remains above the breakout level despite being a slight under performer on the week, losing 25 basis points. 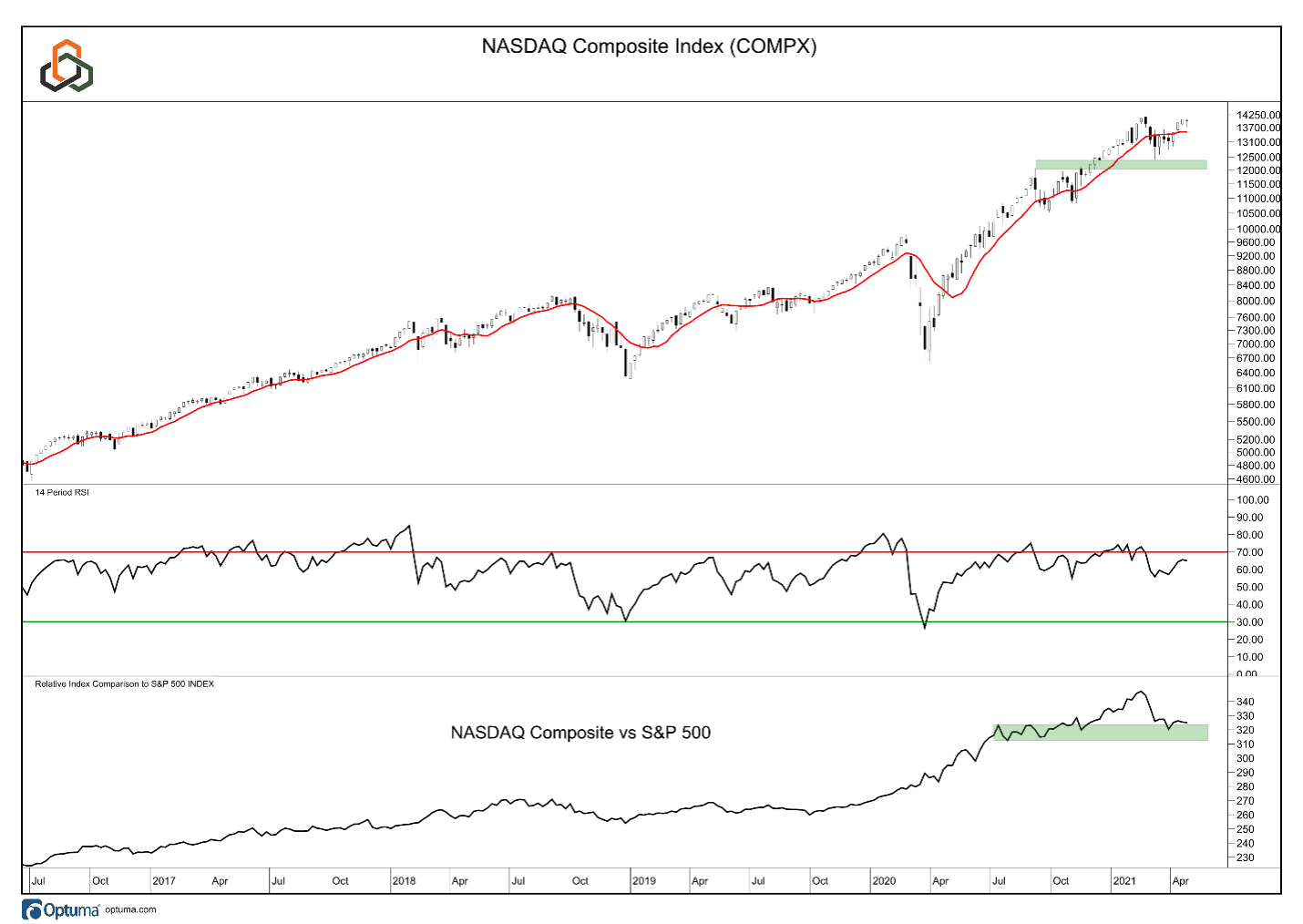 The 10-year yield remains below resistance at the 2019 consolidation zone. After becoming extremely overbought in February during the spike in yields, the 14-day RSI has made a strong move to the downside but is holding a bullish regime for now.

The yield has pulled back to test the rising 50-day moving average which could become important in the days ahead. Holding this level with the RSI remaining above 40 would keep the structure of the uptrend from the August low in place. 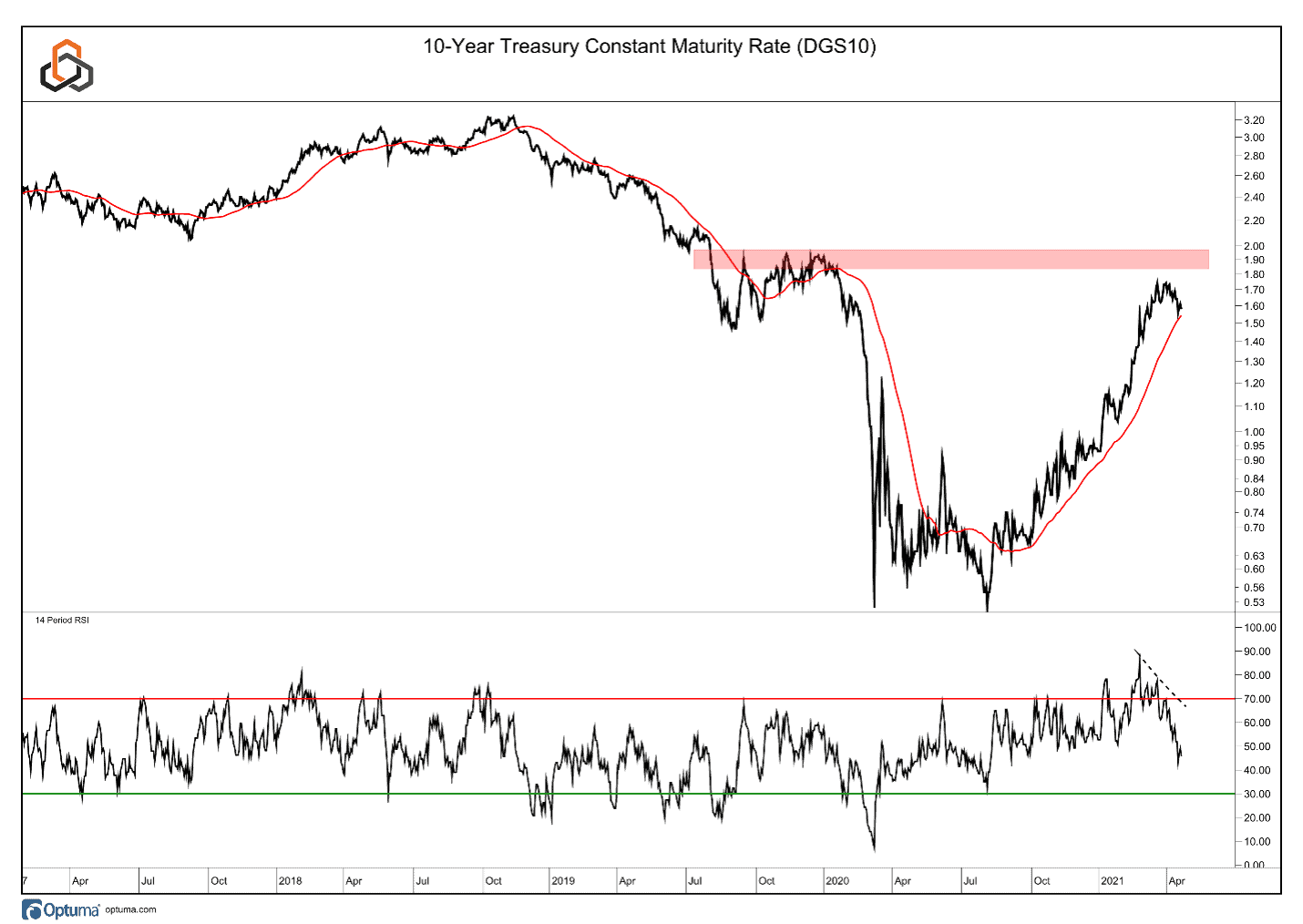 Looking across the Treasury curve, the trends that we highlighted last week remain in place. The short end of the curve is pinned to the downside while the longer-end of the curve has been unable to break above resistance after strong rallies.

A steepening yield curve has been a supporting data point to the reflation trade. Investors who are bullish on that theme would welcome a gradual continuation higher at the long end of the curve. 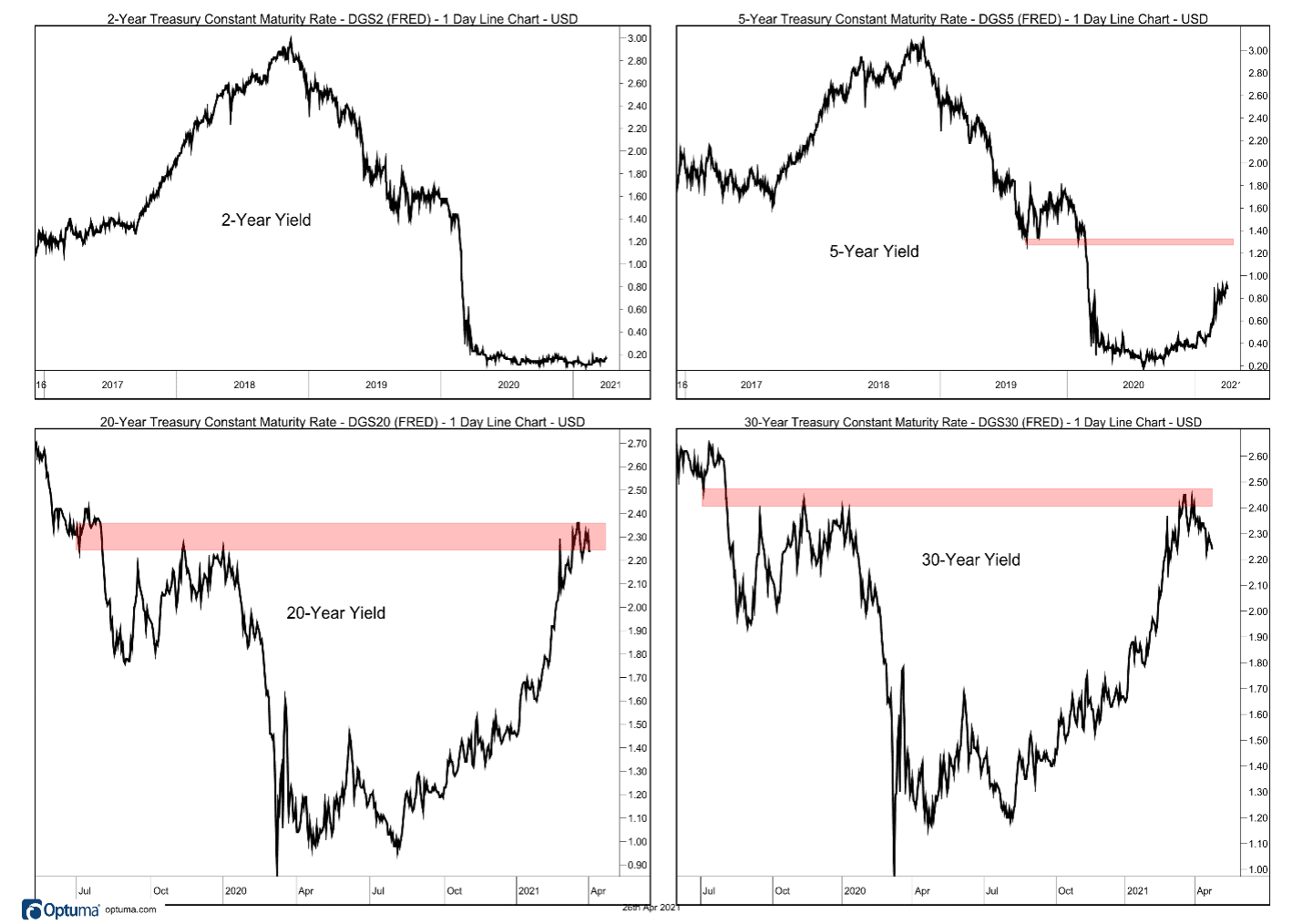 The Dow Jones Global World Stock Index (excluding U.S.) is testing the March high after holding support at the rising 10-week moving average. The 14-week RSI remains in a bullish regime and just below the 70 level that marks overbought conditions.

On a relative basis, the index is building a base vs the S&P 500 after a prolonged bout of underperformance. For now, we can say that the relative trend has shifted from declining to flat but broad outperformance remains elusive for global equities thus far. 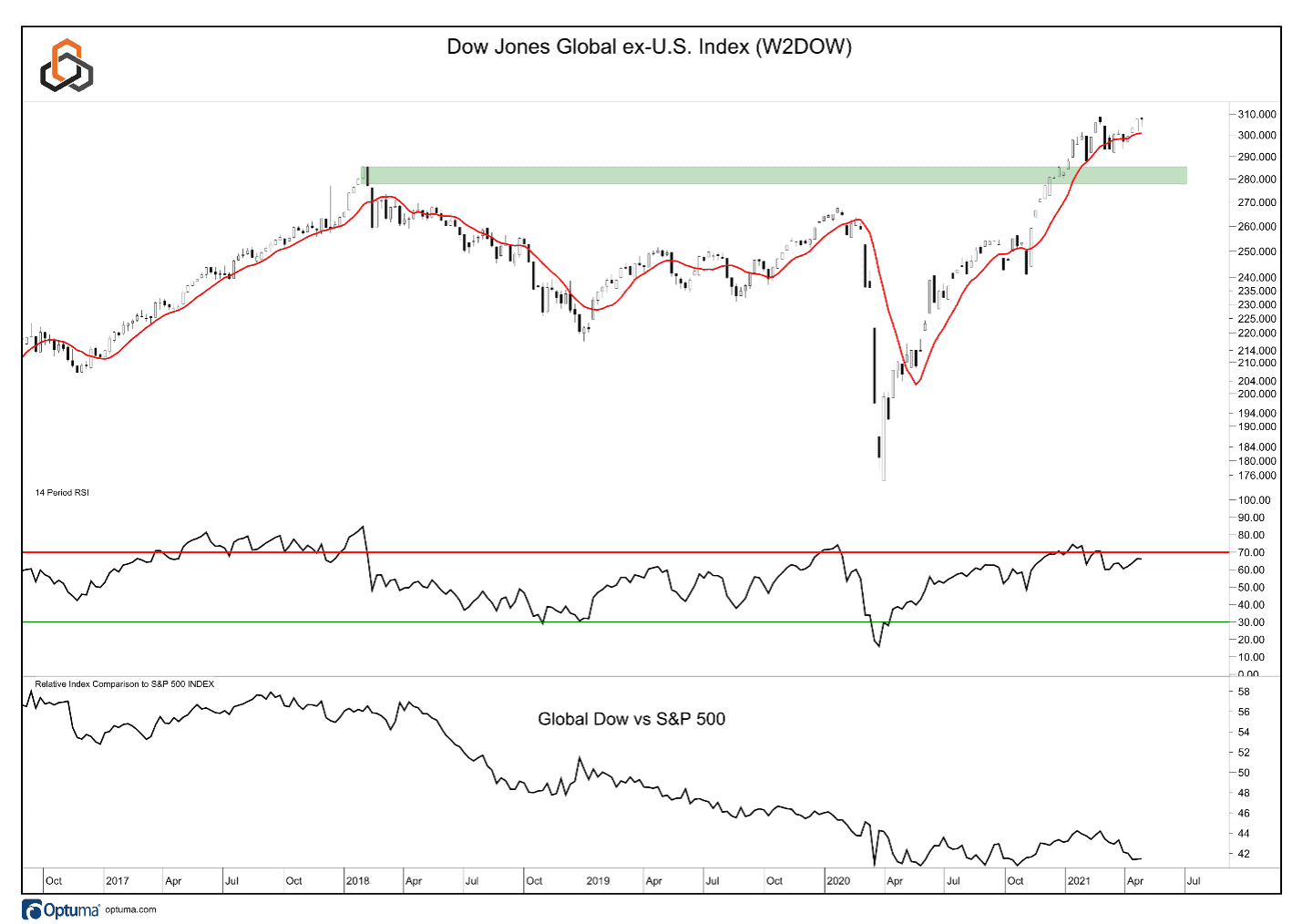 The Bloomberg Commodity Index continues to consolidate in the resistance zone despite a strong performance last week, which kept the group at an overbought level based on the 14-week RSI. The index is above the rising 10-week moving average, which recently acted as support. A break up and out of this consolidation would be a signal that a new, bullish, commodity cycle is under way.

Looked at as an asset class, relative to the S&P 500, the trend of commodity underperformance has not yet ended. At best the trend has shifted from declining to flat. 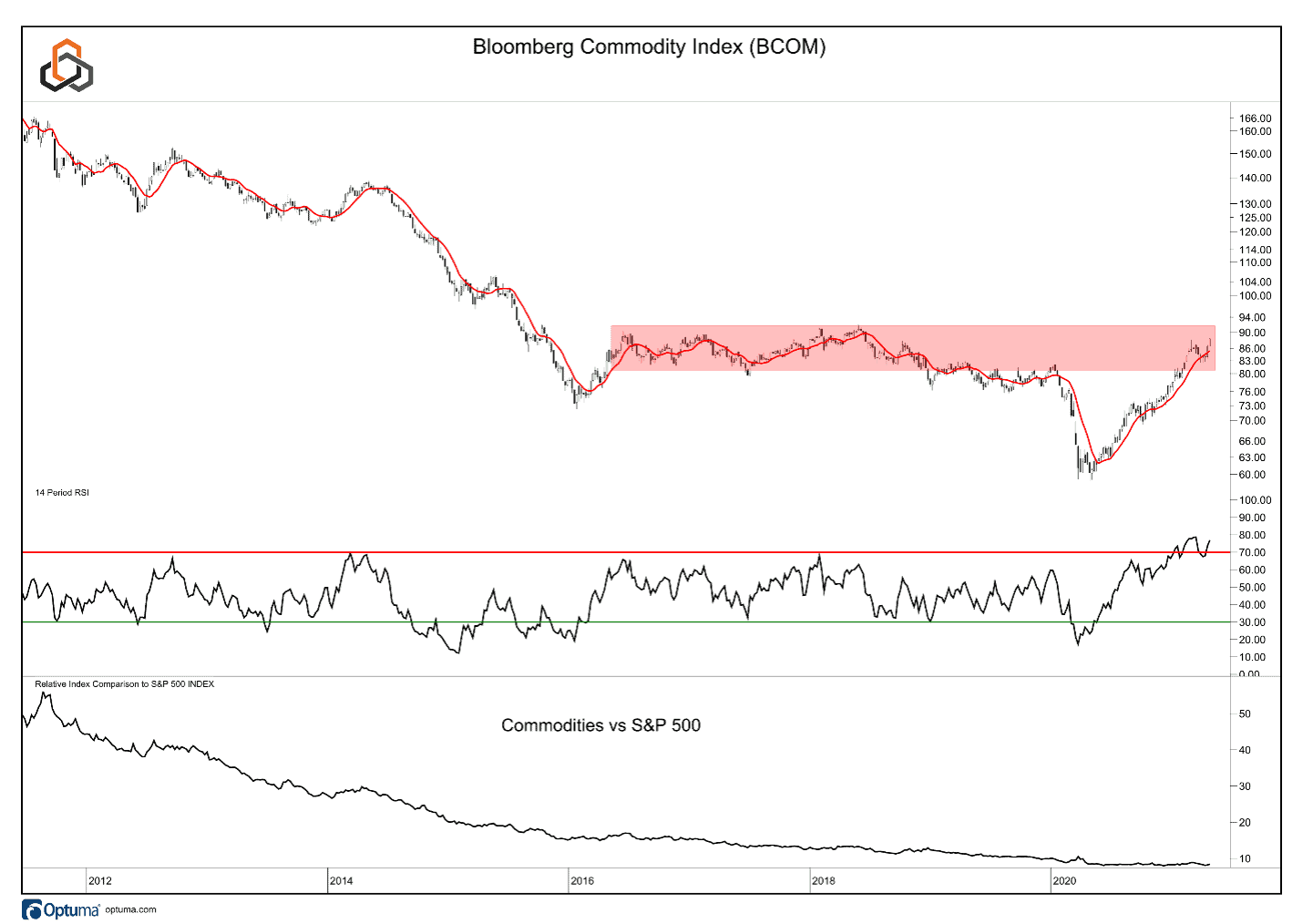 Drilling down on the commodity complex, the standout is clearly the agriculture group which made a powerful move to the upside last week. Industrial Metals also traded to new highs, while precious metals continued to rebound but remain in a near-term downtrend and energy has stalled below resistance. 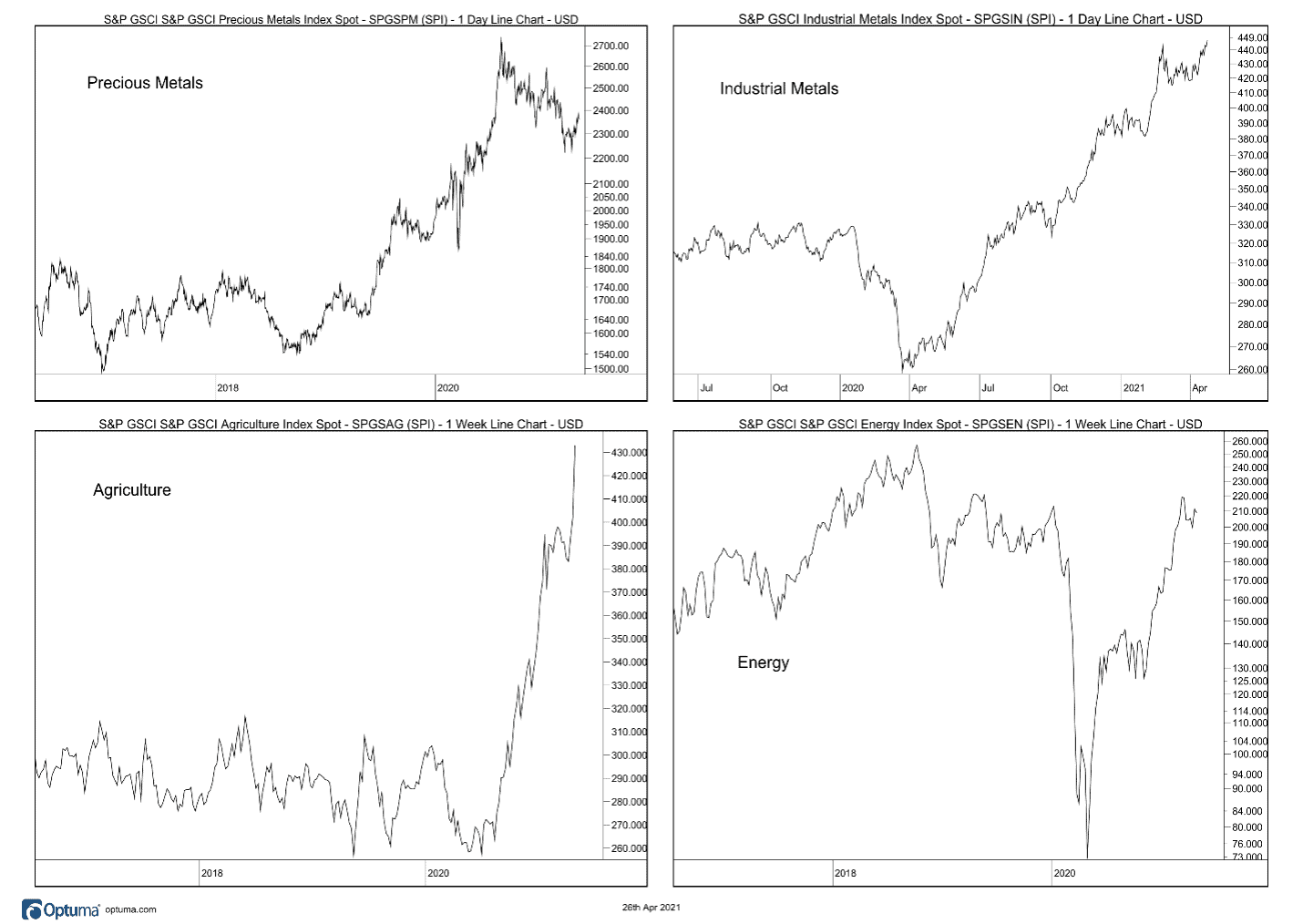 The U.S. Dollar Index declined for a third consecutive week after stalling below resistance. Last week’s move lower took the index below the 10-week moving average which had recently begun to move higher. The 14-week RSI continues to move lower after failing to exit a bearish regime.

Continued weakness on the part of the dollar should provide a tailwind to the commodity complex, increasing the odds that that group will break above the resistance zone highlighted above. At the same time, there would be bullish implications for certain markets outside the U.S., such as the Emerging Markets. 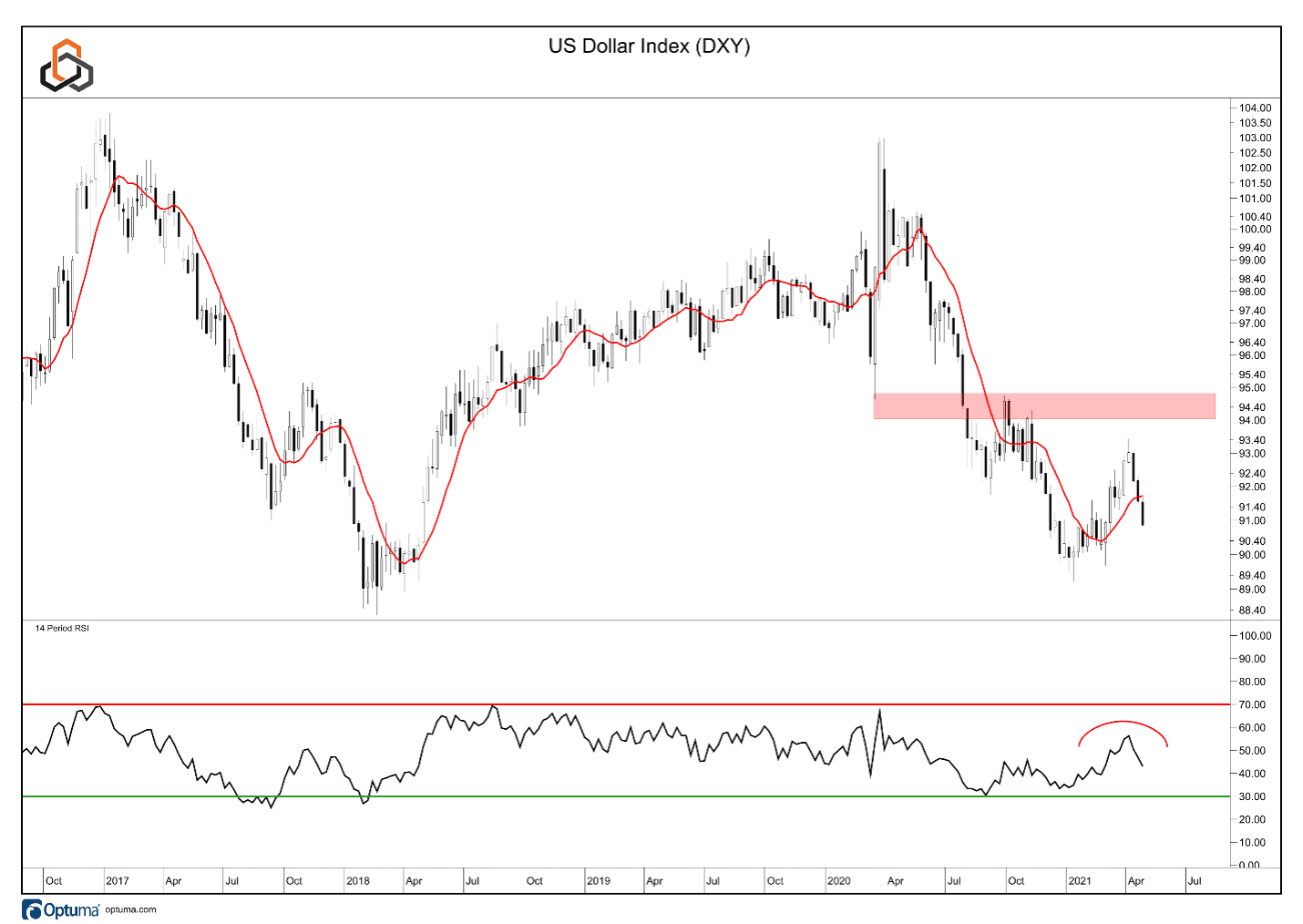 Equities stalled just below record highs last week. Looking at the performance numbers on the week does not paint a clear picture, however. It is important to note that weakness was bought and that the indexes tended to close near the top of their weekly ranges. This signals that there remains underlying demand and that the trends remain to the upside.

Away from equities, the most interesting trend is the continued weakness in the dollar and the implications it could have on the commodity complex, especially if precious metals and energy can “get in gear.”