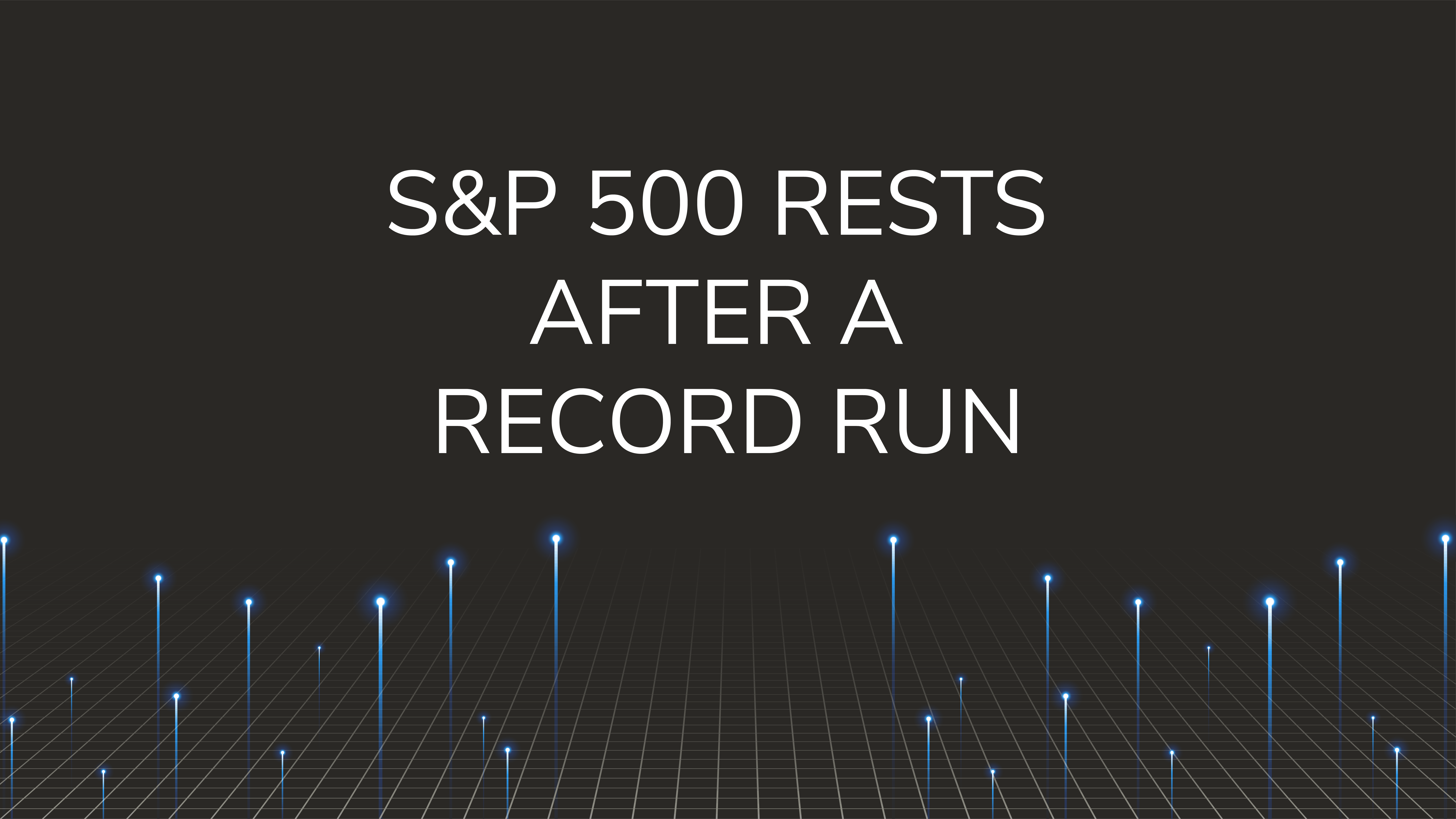 The Taiwan Stock Exchange Weighted Index is a bright spot in Asia as it trades to record highs and holds relative support. Equities in the U.S. are taking a break to start the week. Small caps and the Nasdaq remain in consolidations…perhaps a correction through time? Sentiment is best described as Neutral.

Last week we highlighted the weak trends for the Shanghai Composite Index, which is lagging both the S&P 500 and the STOXX 600. There are parts of Asia which are not breaking down, however. The Taiwan Stock Exchange Weighted Index is trading at record highs. The RSI has moved into an overbought position as the index trades above the rising 50-day moving average.

Relative to the S&P 500, the Taiwan Stock Exchange Weighted Index has held support at the bottom of a near-term consolidation zone and is now moving higher. 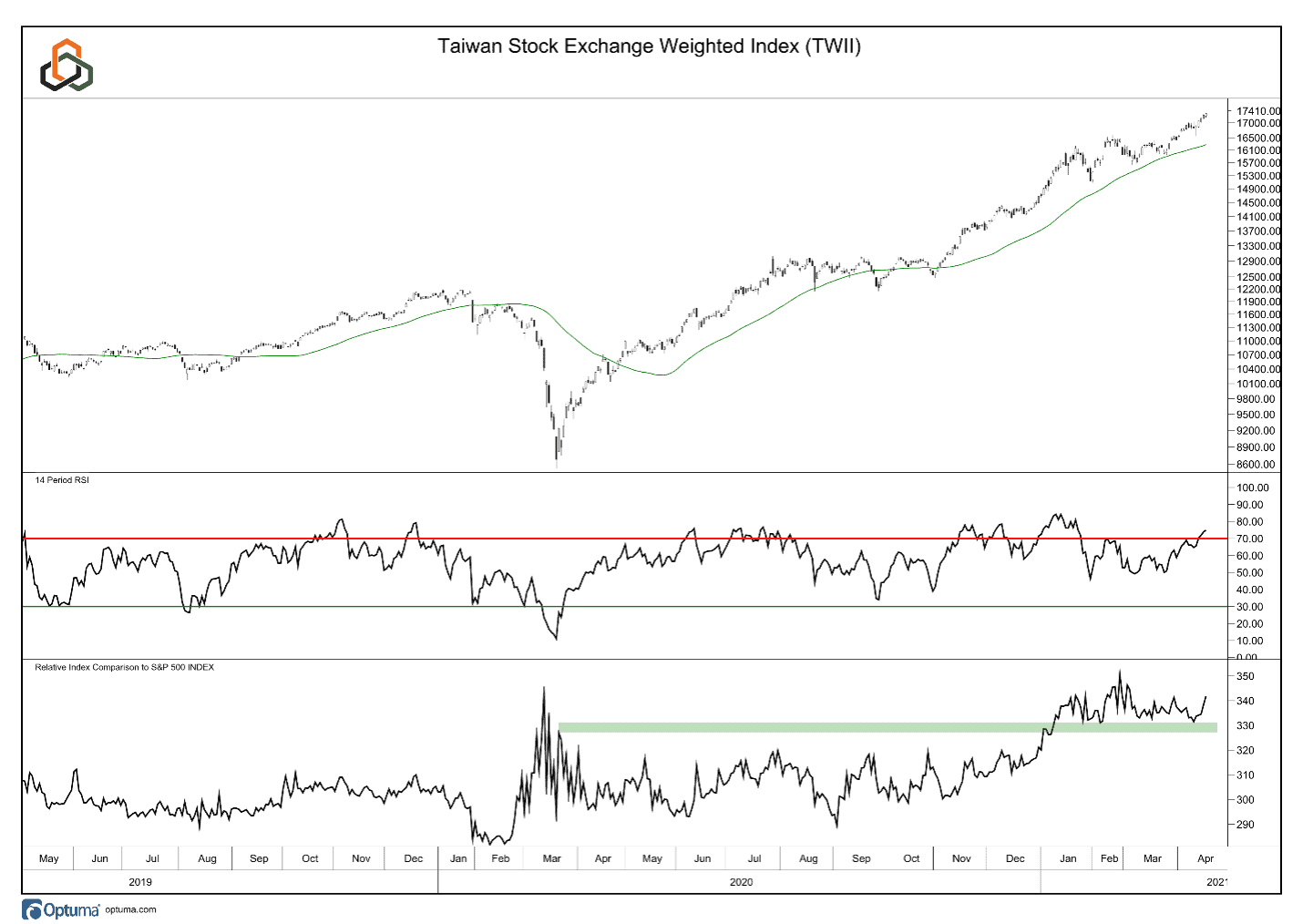 The S&P 500 has started the week on the defensive after making a series of record highs in the first half of April. That strength took the index to an overbought condition which is now in the process of being alleviated; the RSI has crossed back below 70. At the same time, the S&P 500 became somewhat extended from the rising 50 and 200-day moving averages, registering Z-scores of more than two for both time frames. 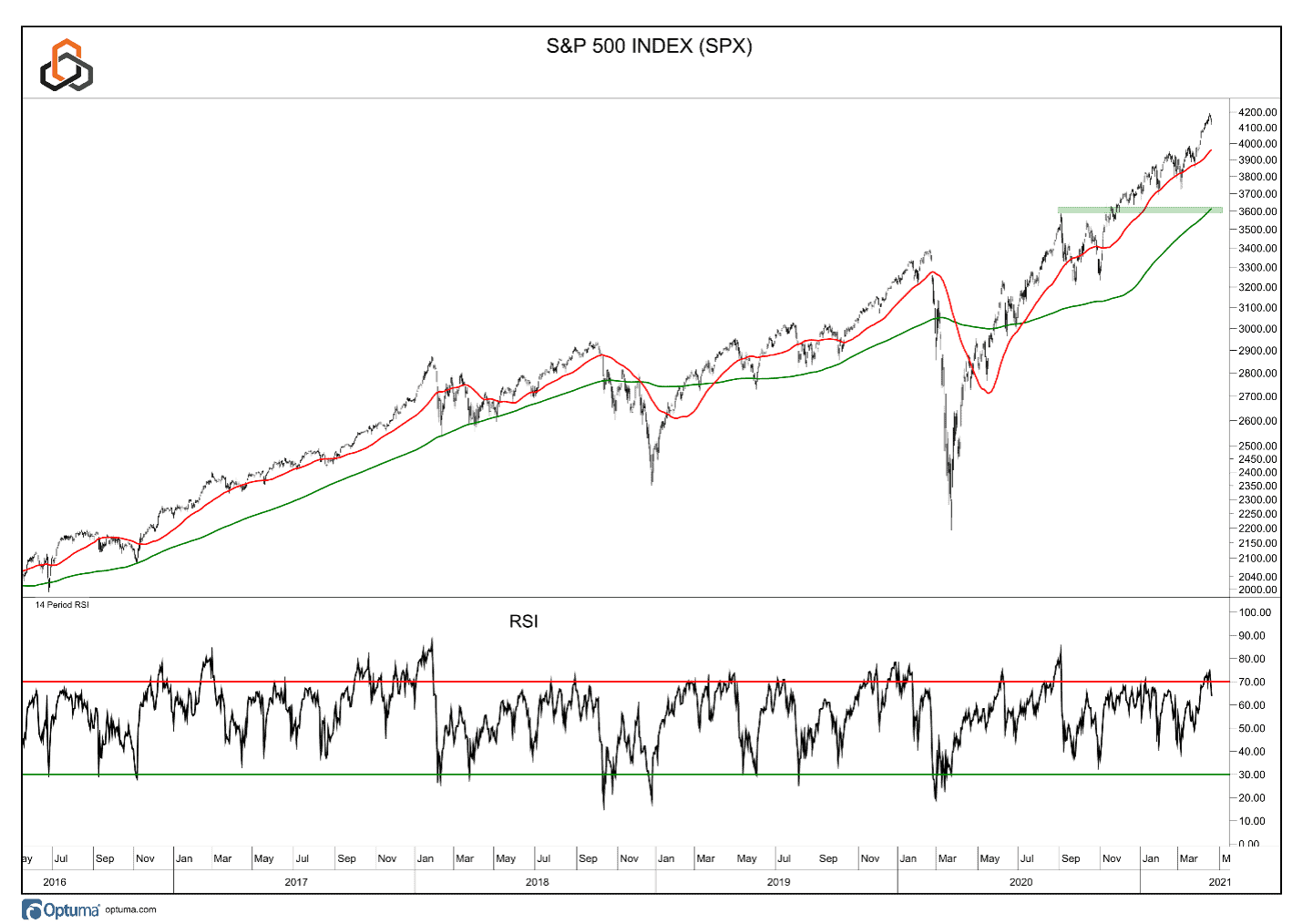 The S&P Small Cap 600 Index has sustained more intense selling pressure this week and closed yesterday below the rising 50-day moving average. The 200-day moving average continues to rise and currently lines up with the support zone provided by the 2018 and 2020 peaks. Small caps have been in a consolidation since the middle of March, but we note that the RSI has held a bullish regime during that time, indicating that momentum has not broken down.

On a relative basis, the Small Cap 600 Index is testing support at the 2019 consolidation. A break down in the price, below the March lows, that leads to a break in relative support would send the signal that the small cap outperformance that we have seen since last fall may be coming to an end. 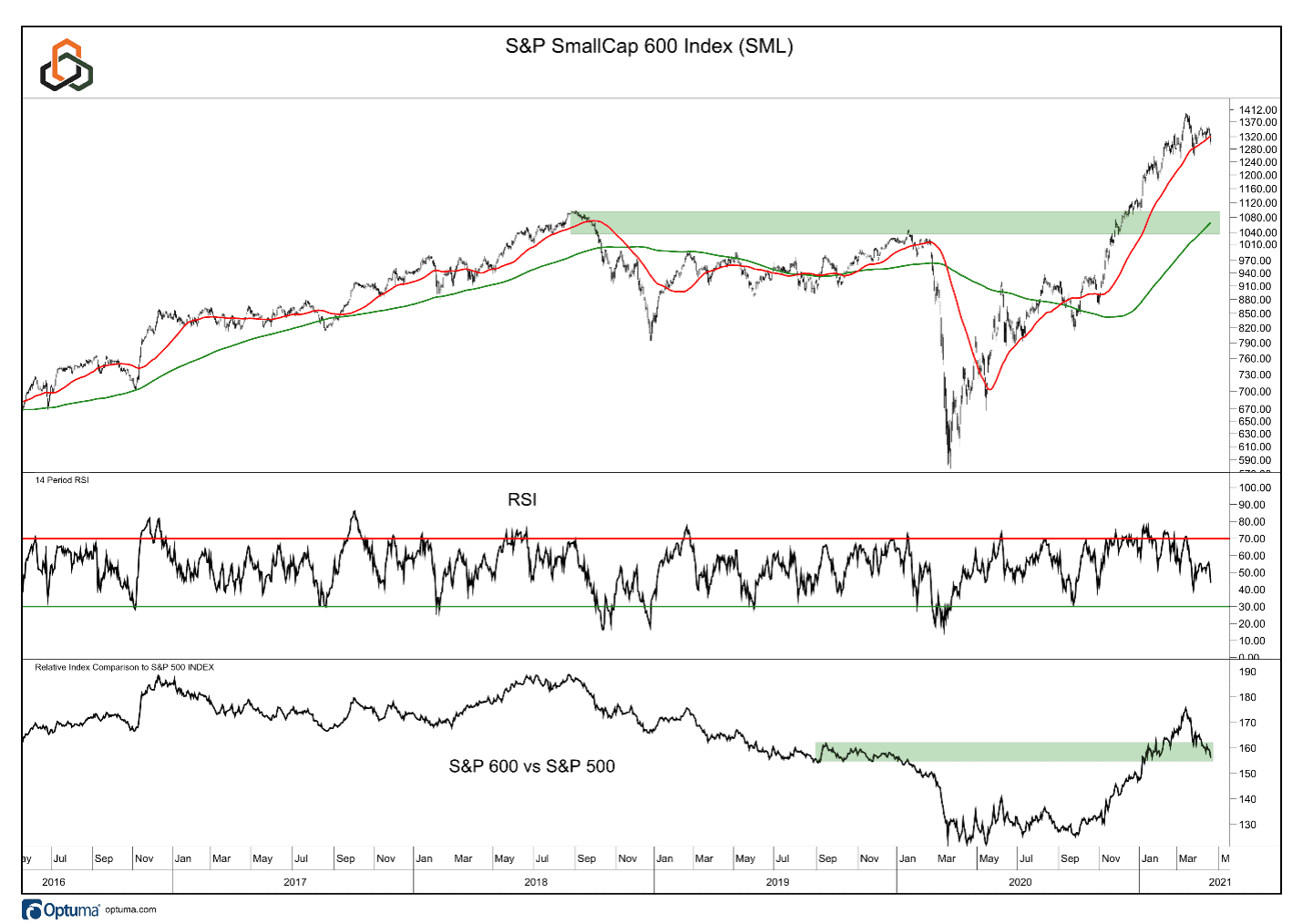 The Nasdaq Composite Index continues to consolidate below record highs but has not been able to break out to join the S&P 500. The index remains above the rising 50 and 200-day moving averages. The index has not become oversold, based on the RSI, since last March, a sign that momentum remains to the upside for now. We look for the moving averages to provide a range of support should the consolidation continue.

On a relative basis, support continues to hold. 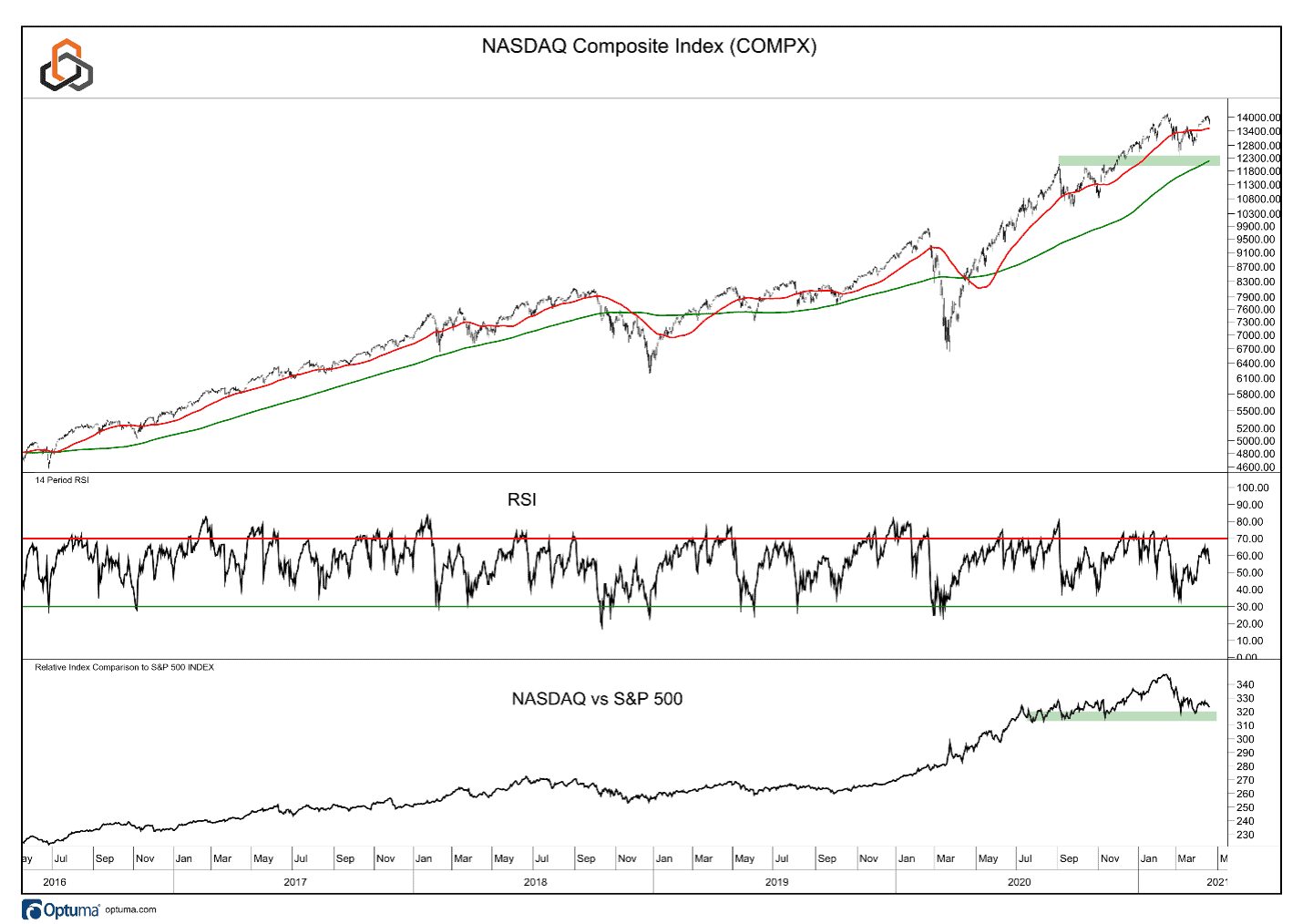 The S&P 500 Volatility Index (VIX) saw a slight tick to the upside in the early days of this week with the S&P 500 pausing its run of records. Holding below the 20 level will likely give equity bulls a sense of relief and signal that the uptrend is likely to persist. 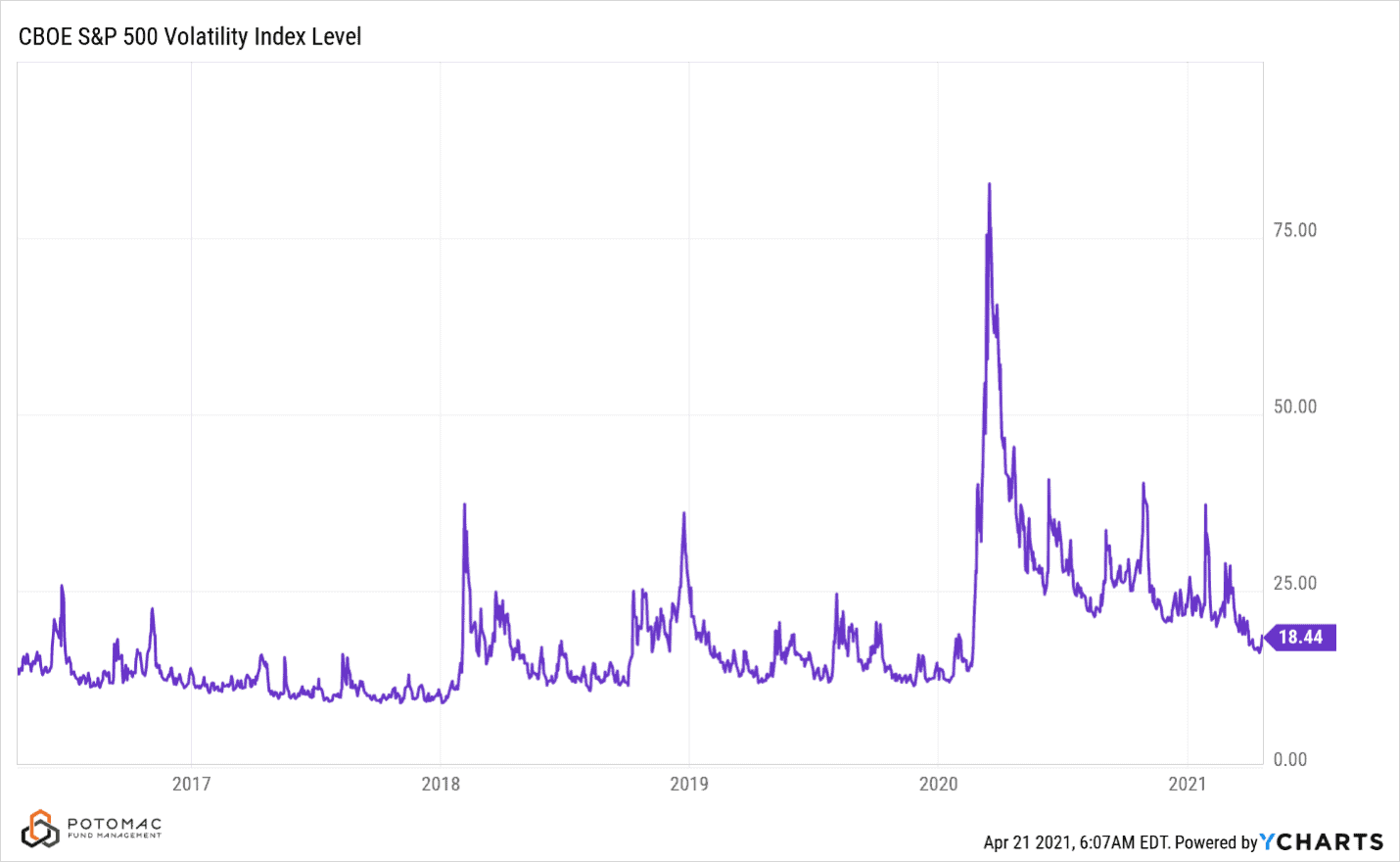 The CNN Fear & Greed Index is in a Neutral position at a reading 47, down from 51 last week. While there is much written about how the market is overheated and investors are “too bullish”, that is not being picked up in this barometer.

The major averages in the U.S. have come under pressure this week but momentum remains to the upside. Perhaps small pockets of the market are running hot, but that is not the case from a higher-level view.
Disclosure: This information is prepared for general information only and should not be considered as individual investment advice nor as a solicitation to buy or offer to sell any securities. This material does not constitute any representation as to the suitability or appropriateness of any investment advisory program or security. Please visit our FULL DISCLOSURE page.