Maybe it was
Just a Pause? 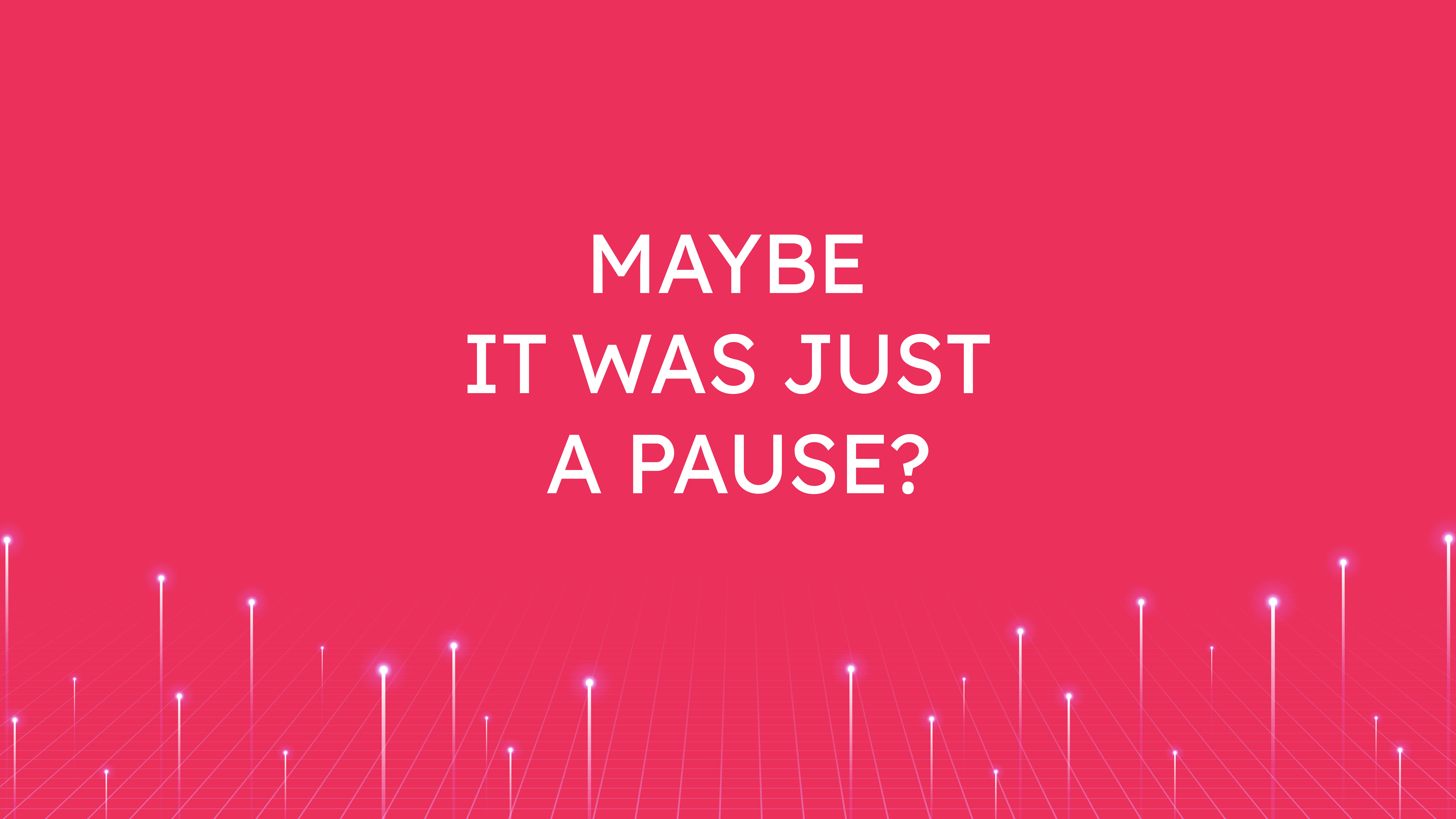 Is that it for Gold? On April 22nd, we pointed out that Gold appeared poised for a move to the upside. The subsequent rally has begun to stall at an interesting level. The rally from $1,672 has retraced 61.8% of the decline from the August 2020 high to the March 2021 low. At the same time, the 14-day RSI is in an overbought position. Pullbacks that hold above $1,820 would likely signal that a new bull run is beginning for Gold. Below that level, the March lows are likely in play. 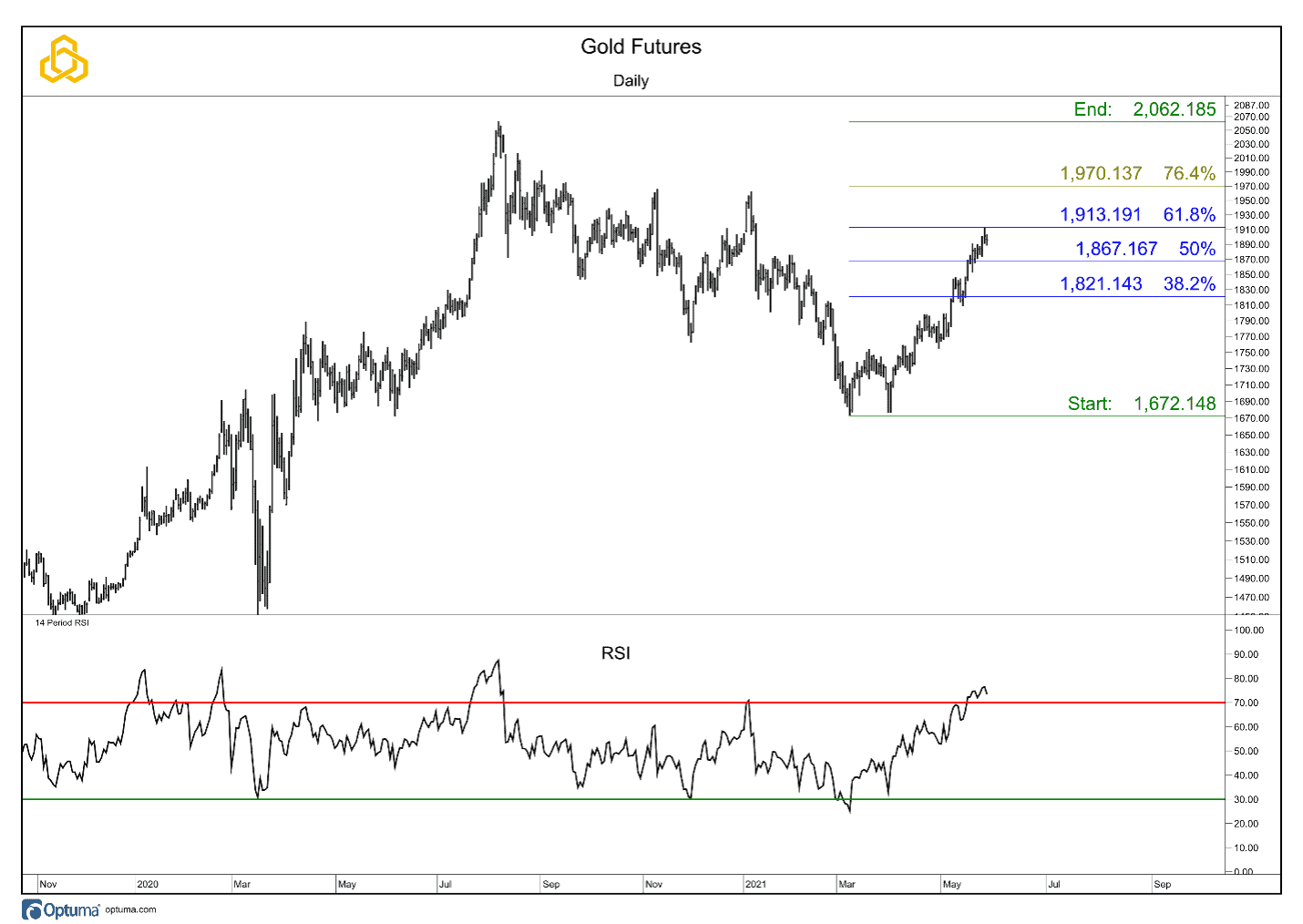 We update our views on the key relationships that we track across the market to get a sense of investor’s willingness to take on risk. We also highlight the trends playing out in major factors such as Growth, Value, Large Cap, and Small Cap.

The consolidation continues for the ratio of the S&P 500 High Beta Index vs. the S&P 500 Low Volatility Index, but we cannot ignore the strong move from support in the near-term. The ratio has retaken the 50-day moving average and is on the verge of trading to a new high. The rising 200-day moving average is much lower. We note that during the consolidation, the RSI has not become oversold, indicating that momentum remains with the bullish trend. 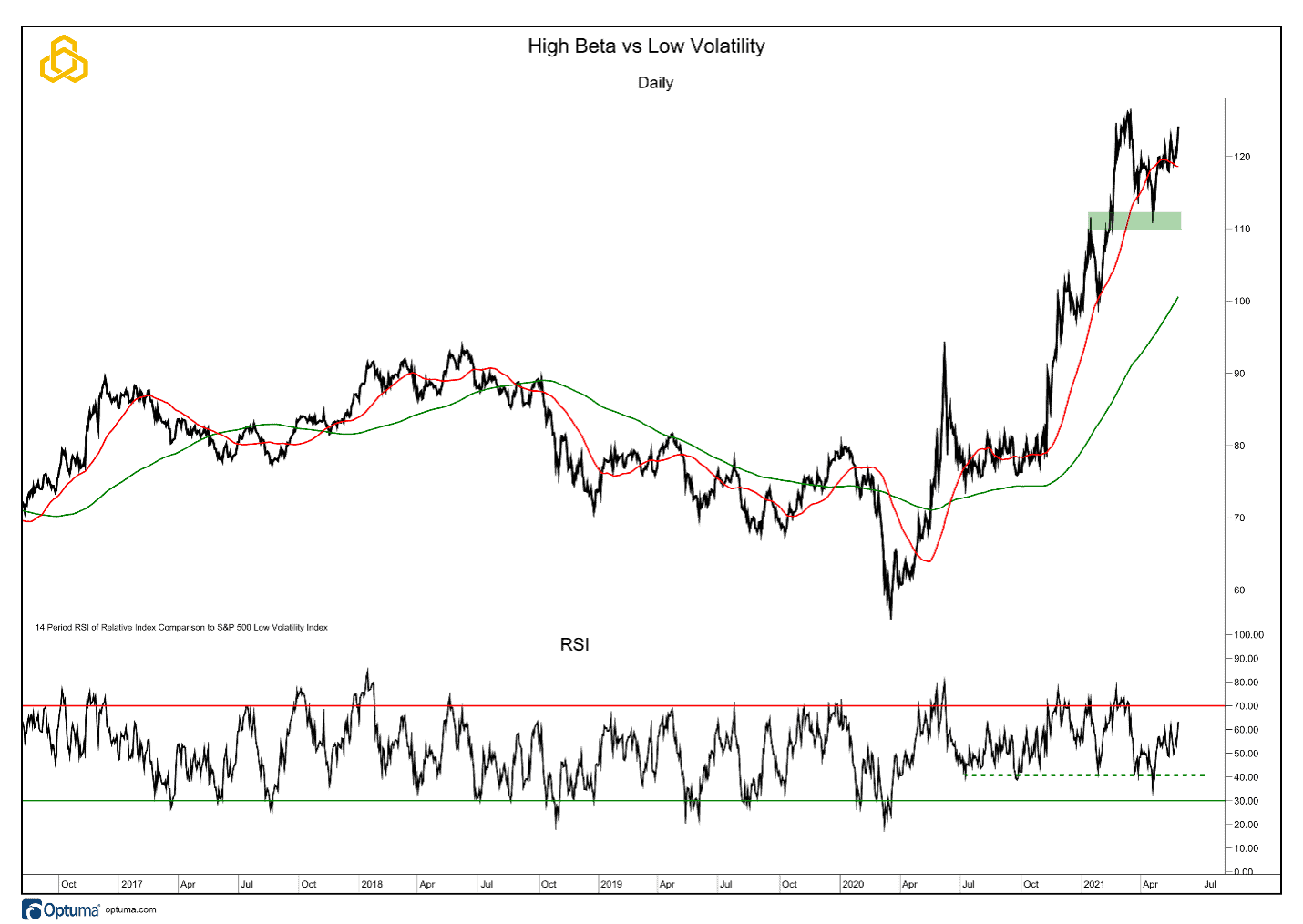 The ratio of Consumer Discretionary stocks relative to the Consumer Staples stocks has also retaken the 50-day moving average after holding support at the 2018 high. The 200-day moving average is much lower. While the 14-day RSI has not broken its trend of lower highs, we note that, the indicator has not been able to achieve an oversold reading. 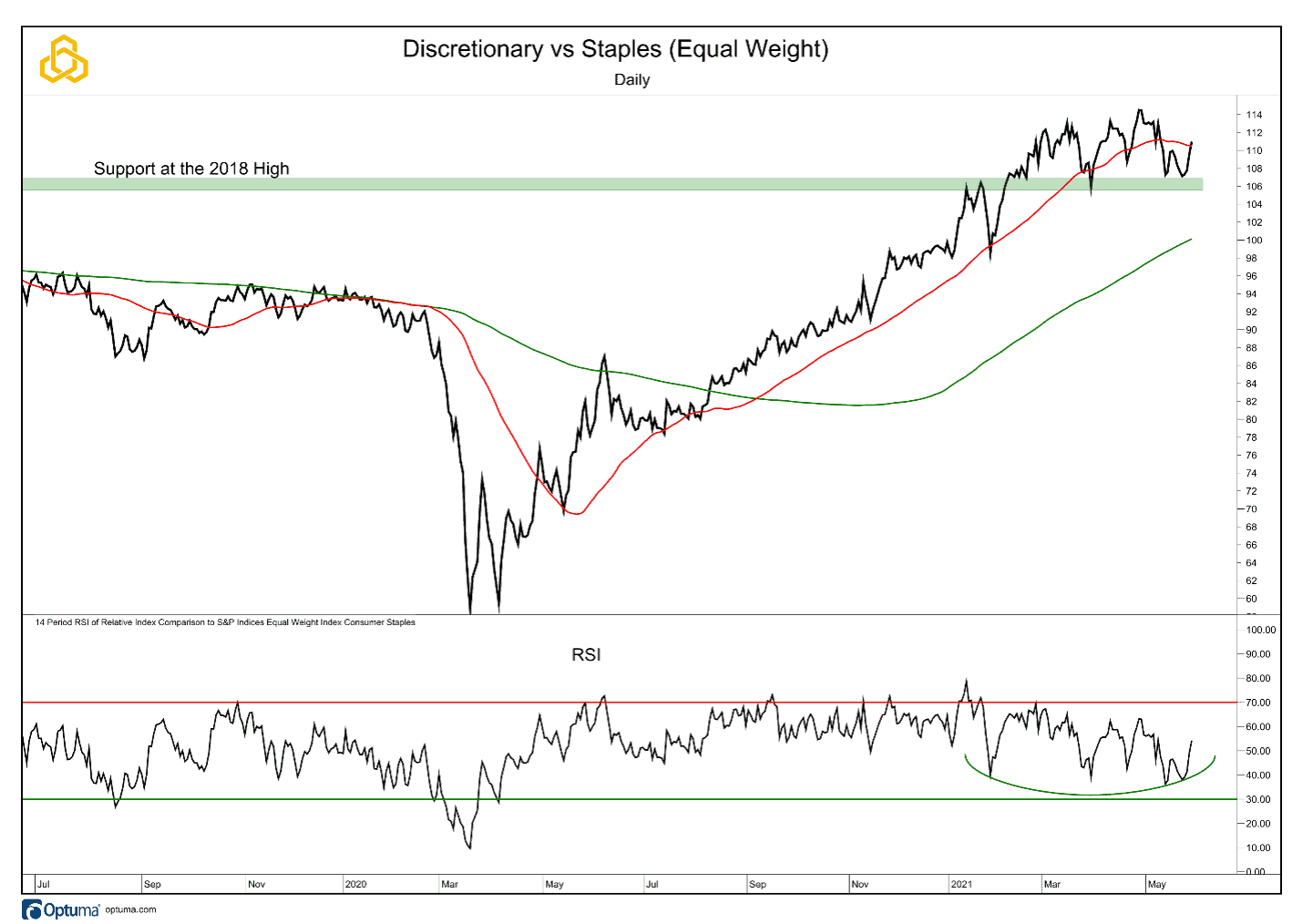 The weekly trend in the Copper/Gold ratio remains below the key resistance level that we have been highlighting, as does the 10-year yield. The rolling 13-week correlation between the ratio and the 10-year yield remains positive.

Zooming in on the daily data, we can see that Copper/Gold ratio and yields are working higher from near-term support. The jury is still out on which way this will break. 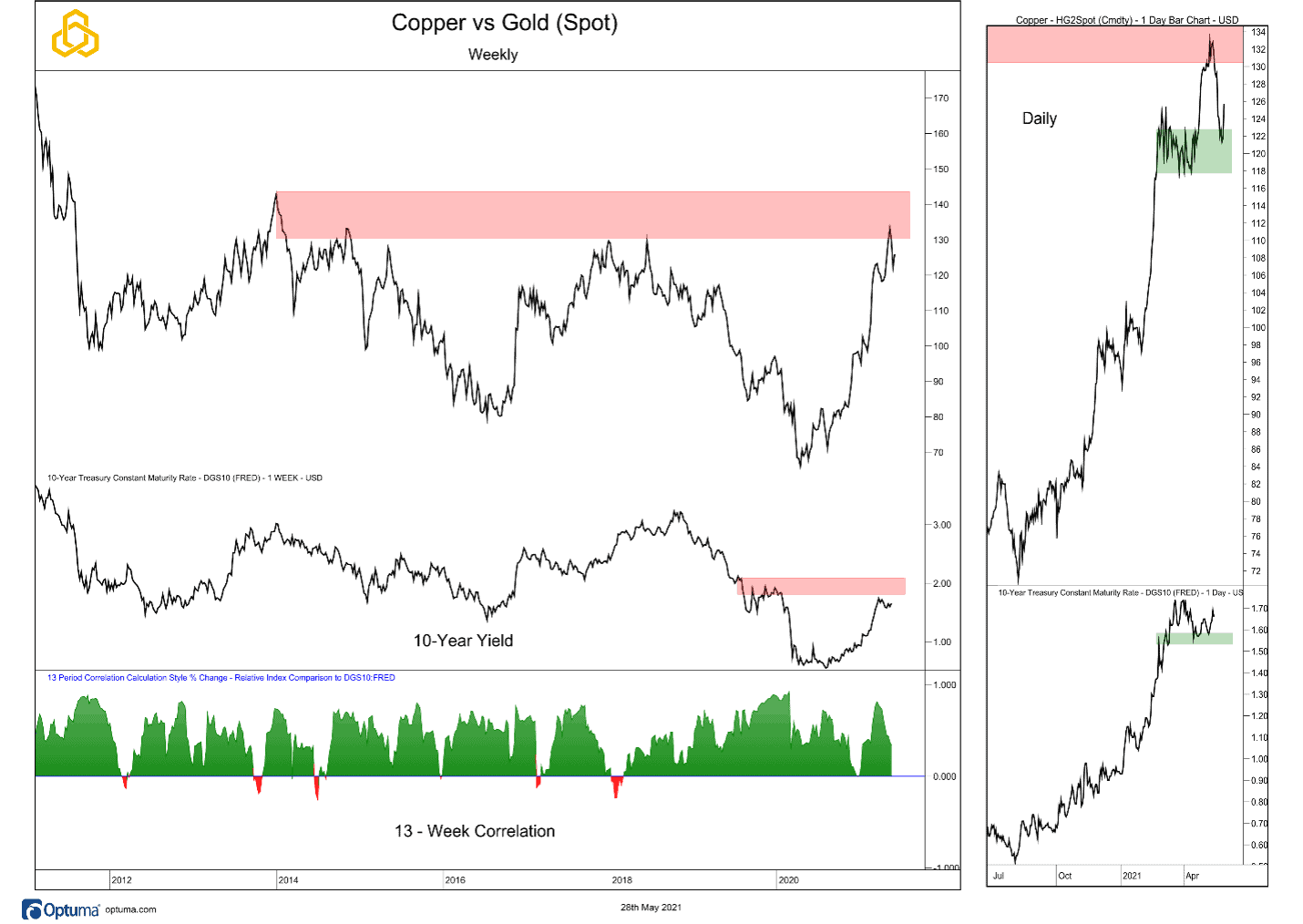 The Lumber/Gold ratio continues to test the rising 50-day moving average after pulling back from an extremely extended position. Thus far, the 14-day RSI remains in a bullish regime and continues to make higher lows as price tests the moving average. This is a sign that momentum remains in favor of further upside for the ratio. 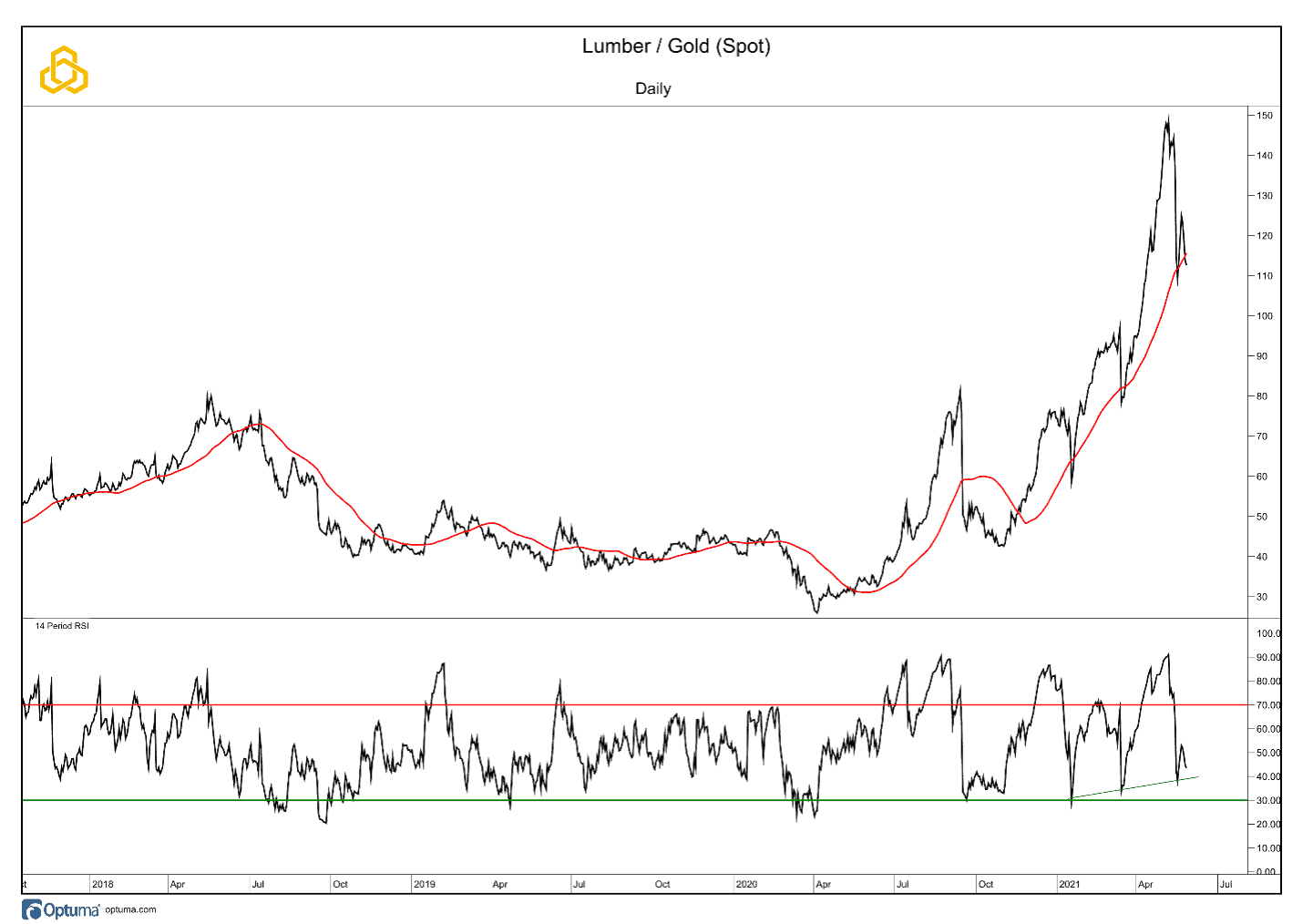 The themes below can show us where investors are allocating capital within the equity market.

It appears that Value is reasserting its leadership position relative to Growth. The ratio is below the declining 50-day moving average, which is acting as resistance in the near-term, and the declining 200-day moving average. At the same time, the 14-day RSI is turning lower after making a lower high. Of late, this indicator has failed to become overbought on rally attempts. We have highlighted the key support level, which is at risk of being broken based on the shift in momentum in favor of the bearish trend. 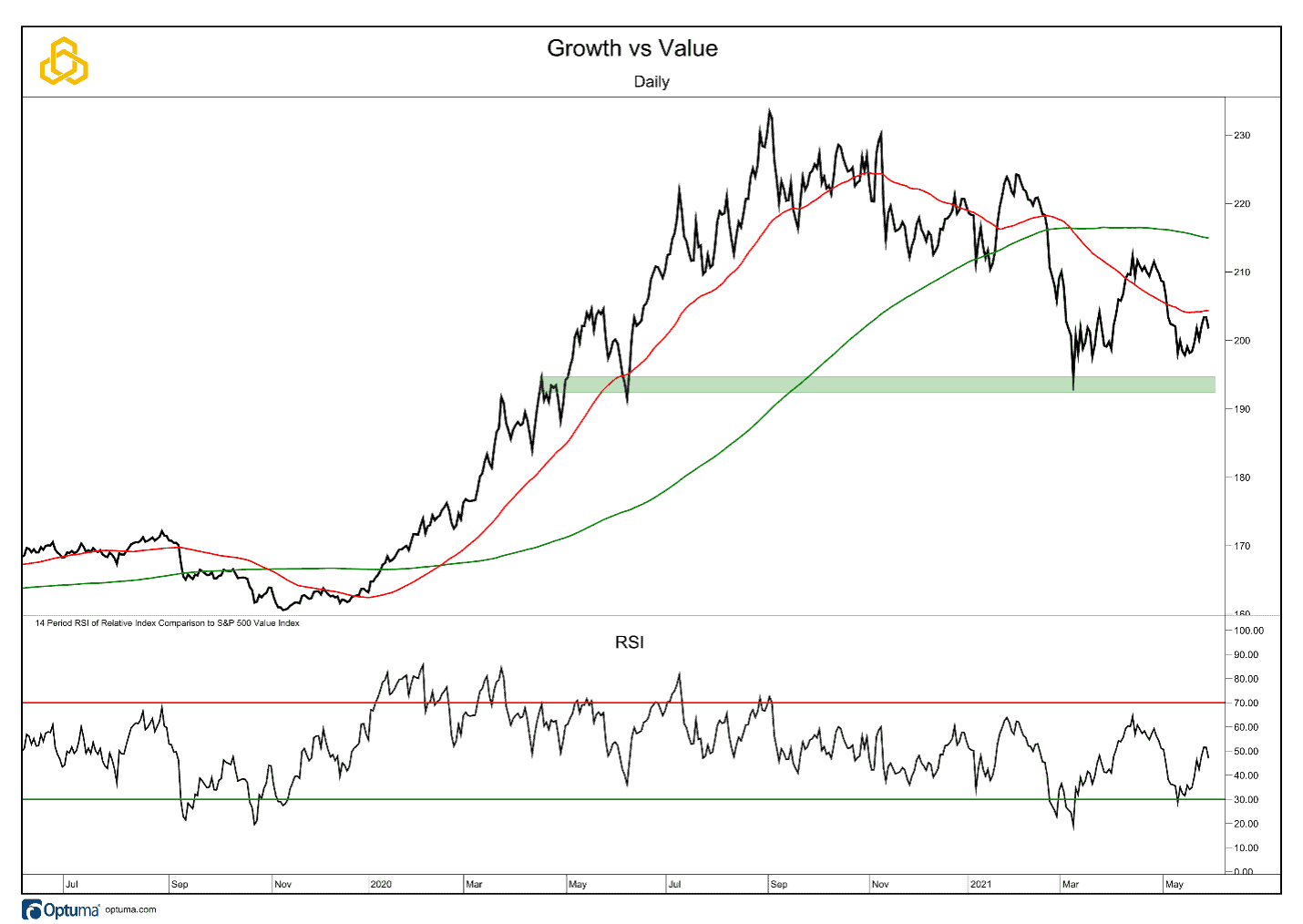 The ratio of Small Caps to Large Caps is moving higher from support and has retaken the 50-day moving average while remaining well above the rising 200-day moving average. The 14-day RSI did not become oversold during the pullback in the ratio and has been making higher highs and higher lows of late. It appears that momentum is moving back in favor of the Small Cap stocks. 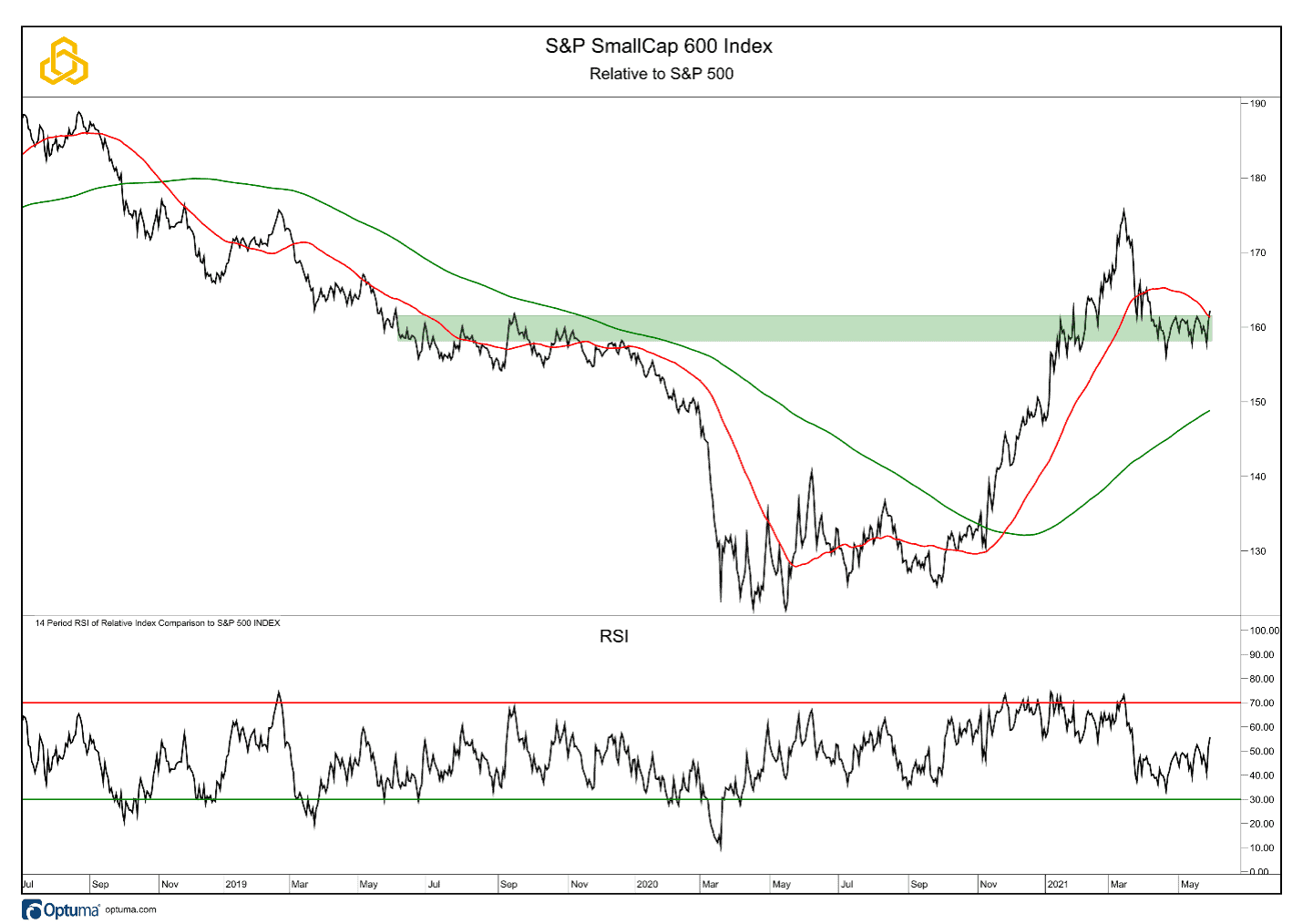 While the longer-term trends have remained in favor of risk seeking over risk aversion, the short-term trends are beginning to tilt in that direction as well. More interesting, are the shifts in performance. After a brief countertrend rally, Growth is likely to continue to lag Value. At the same time, Small Caps appear likely to reassert leadership over Large Caps. Perhaps the countertrend reactions in these themes were simply a pause? Gold stalling at a key level supports this view.