Pressure on Reflation Assets
Causes Key Levels to be Tested

After closing at a record high in the prior week, the S&P 500 saw selling pressure last week which pushed the index to close below the 10-week moving average. The weakness was most pronounced in the sectors of the S&P 500 most closely tied to reflation such as Materials, Financials, and Energy. Near-term support remains near the 4,100 level. Should that give way, the rising 40-week moving average will likely come into play. Weekly momentum is in a bullish regime, but we note the lack of confirmation at the prior record highs. A break of support would confirm this bearish divergence. 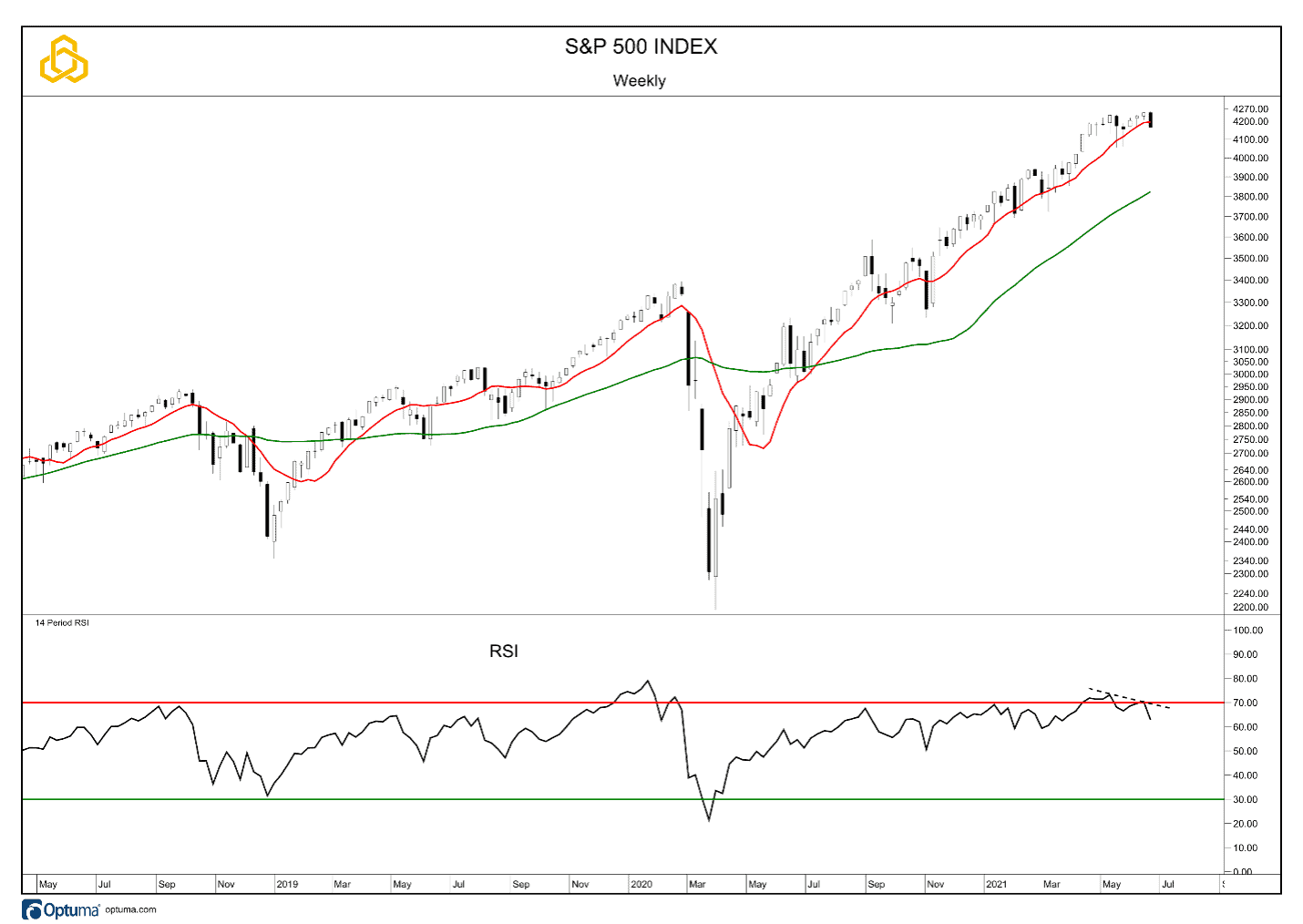 While reflation sectors were the hardest hit groups of the S&P 500, another group leveraged to that theme, Small Caps, also saw selling pressure last week. The S&P Small Cap 600, which has been in a consolidation since March, closed below the 10-week moving average but managed to remain above the support zone that we have been highlighting in the 1,250 – 1,300 range. Below this range, the 2018 highs are a key level for equity bulls to defend.

On a relative basis, Small Caps did manage to hold support. If a rebound, and an attack on the prior highs, were to take hold, this is a logical spot for it to begin. Breaking relative support would point to a transition to a trend of underperformance. 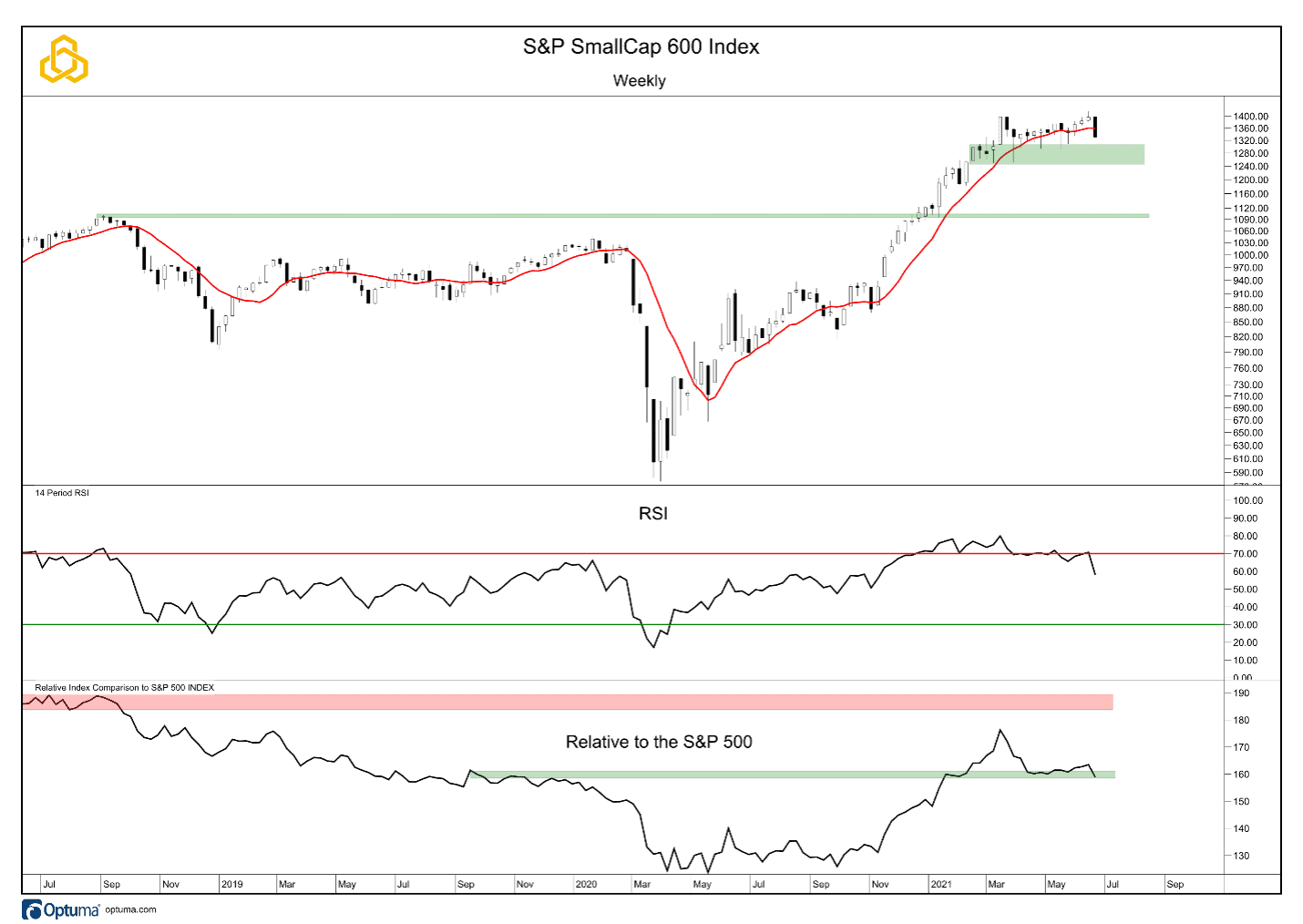 All sectors of the S&P 600 closed lower on the week. The top four (down the least) were Health Care, Technology, Communication Services and Utilities: 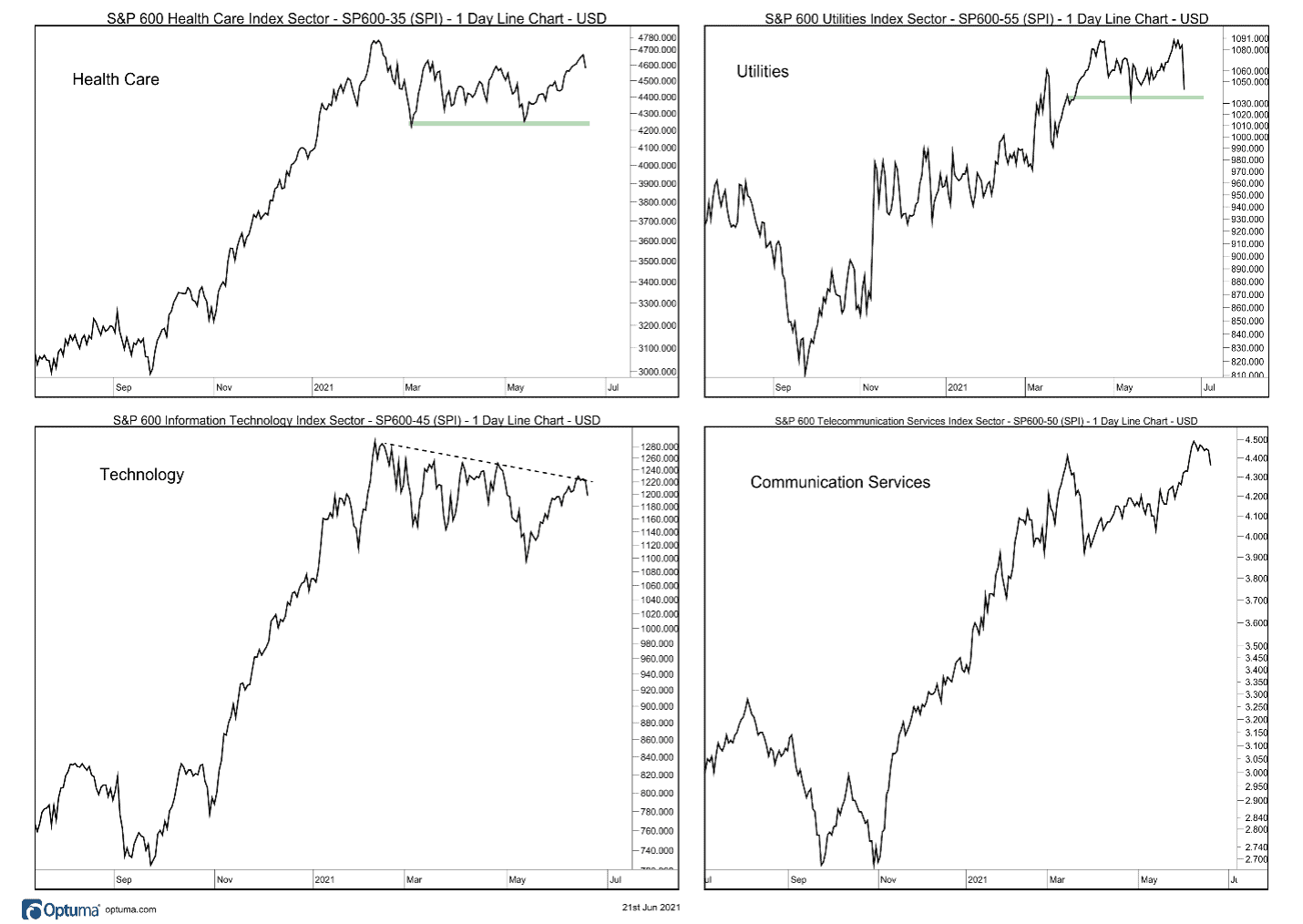 The NASDAQ Composite Index was the bright spot in the equity market last week, remaining above the rising 10-week moving average and the support zone at the lower end of the consolidation (12,400 – 13,000). The 14-week RSI remains in a bullish regime; odds favor new highs for the index being reached in the near-term.

Relative to the S&P 500, the NASDAQ is moving higher from support and may be reasserting a leadership position. 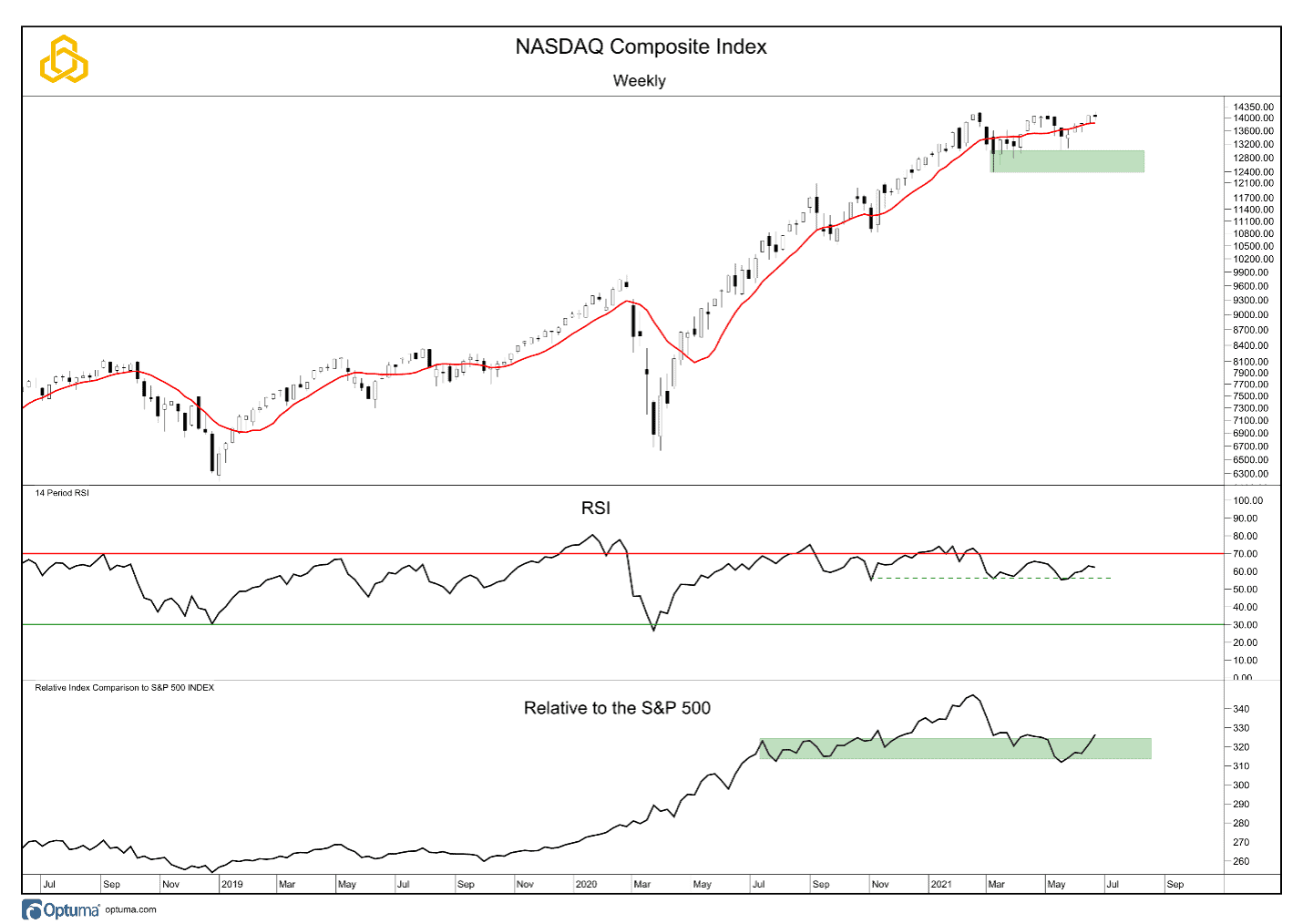 The 10-Year Note moved lower following comments from Fed Chairman Powell, on the heels of the latest FOMC policy meeting, that were seen as more “hawkish” than investors expected. The note is below the 50-day moving average. However, there has yet to be a meaningful breakdown in momentum, with the 14-day RSI remaining in a bullish regime and holding support.

A break of $134 to the upside would signal that a new uptrend is underway (lower rates). Below $130, the downtrend is resuming. 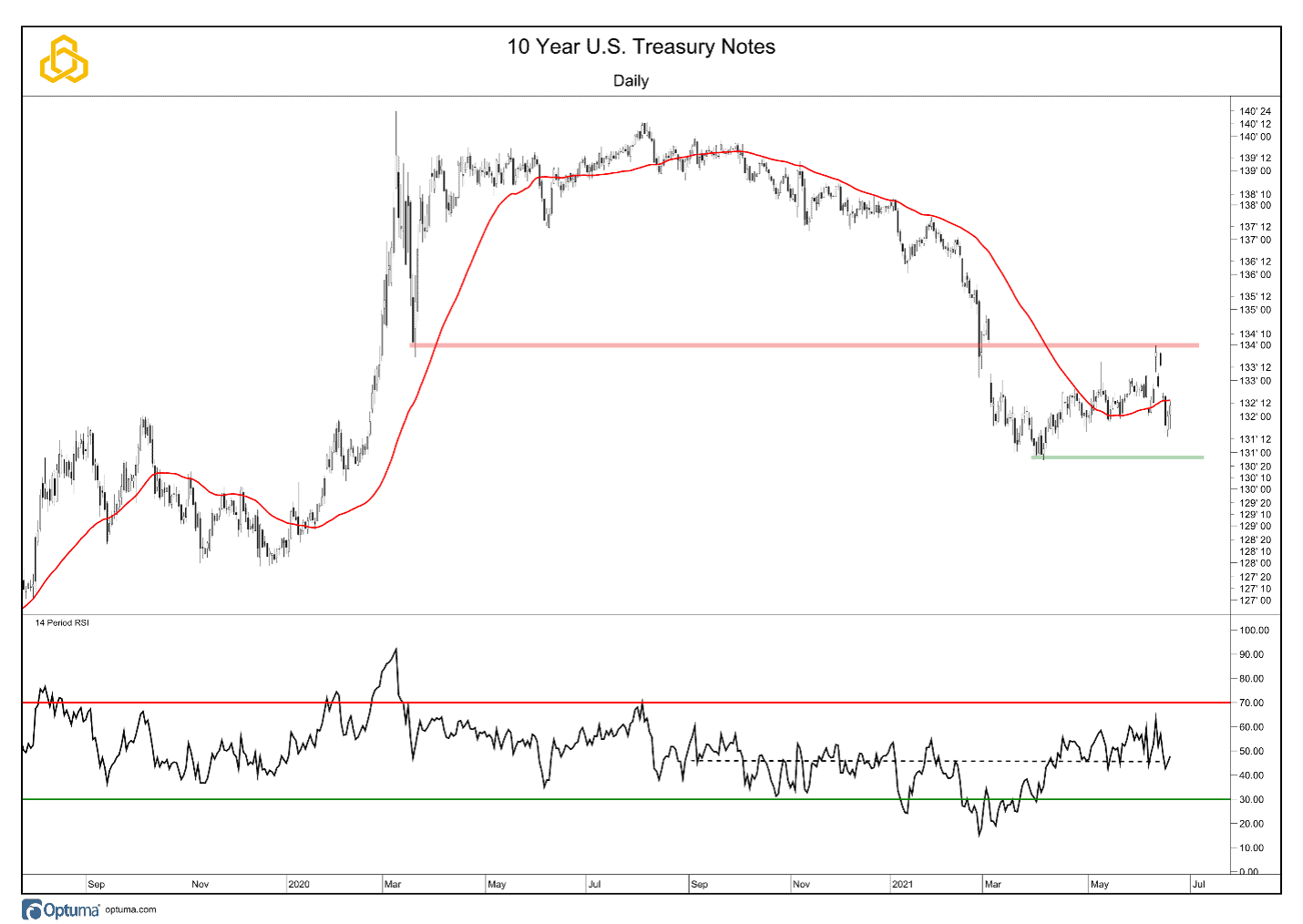 While the 10-Year Note receives much of the attention, the bigger story in fixed income last week was the rally at the long-end of the curve. The 30-Year Treasury Bond saw a sharp rebound from the, now rising, 50-day moving average and is on the cusp of breaking above resistance. The 14-day RSI has made a series of higher lows and may in the process of shifting to a bullish regime.

Continued strength this week would serve to complete a bearish to bullish reversal for the long bond. 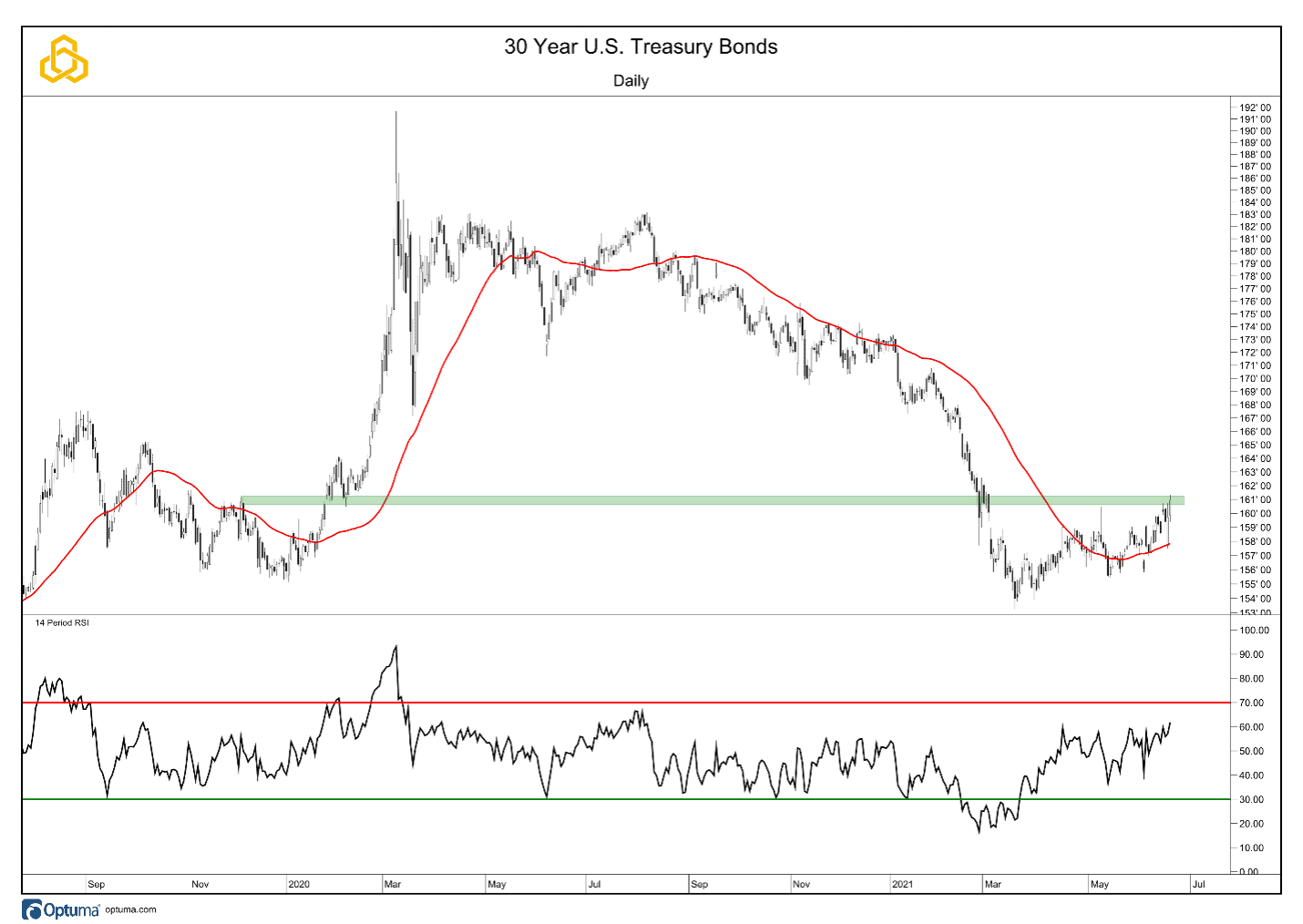 Weakness in equity markets was not isolated to the U.S. The Dow Jones Global World Stock Index (Excluding U.S.) also pulled back from record levels and is now testing the rising 10-week moving average. As with the S&P 500, record highs were not confirmed by momentum, the 14-week RSI did not make a new high with price. Should weakness persist, support at the 2018 highs will be the key level for bulls to defend.

Relative to the S&P 500, the Global Dow continues to build a base, but has not been able to gain much upside traction. A view that is unchanged from the last week. 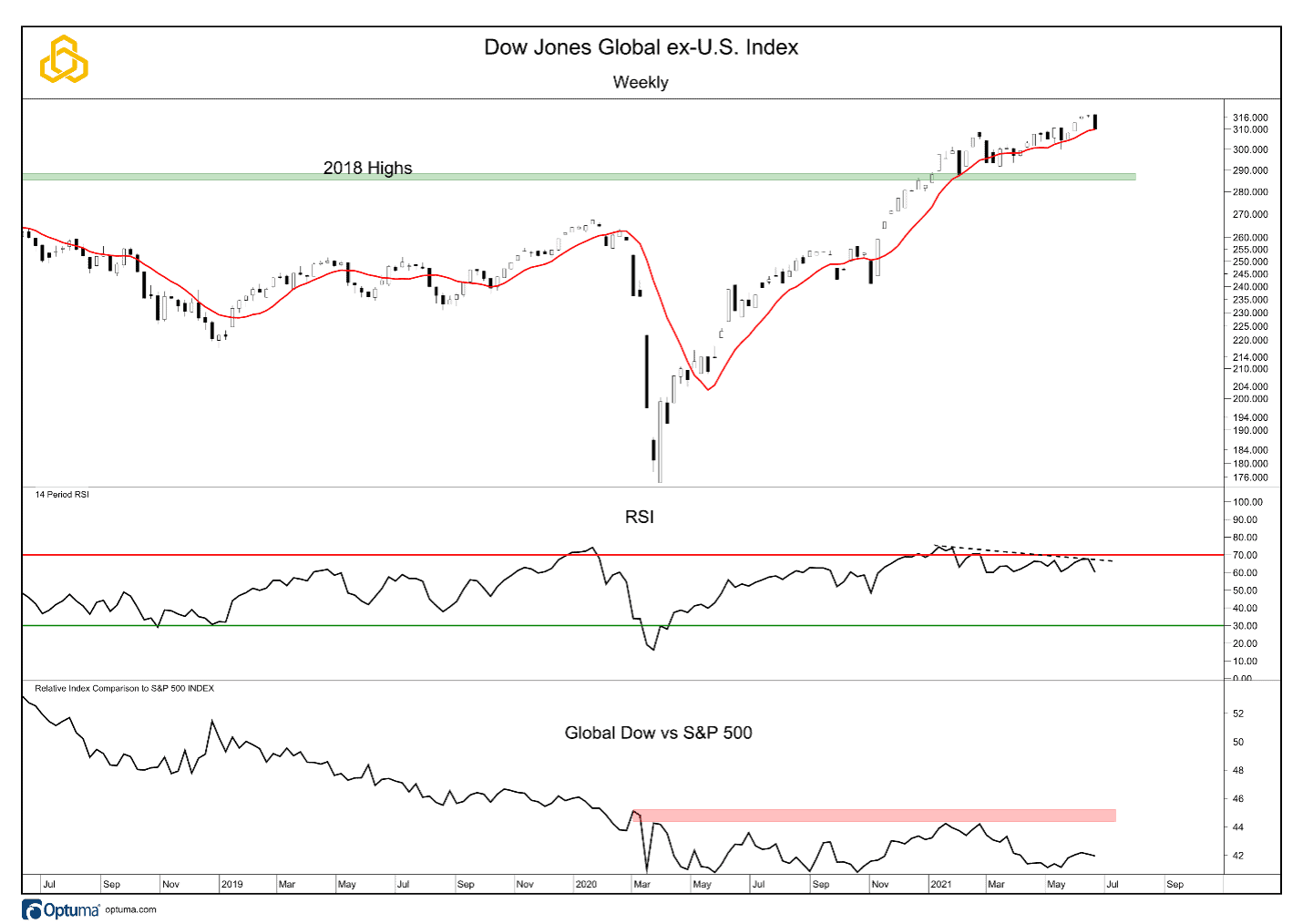 The Bloomberg Commodity Index was also under pressure last week after closing at record levels the prior week. The index closed below the rising 10-week moving average and just below the support zone provided by the 2018 highs. It appears that commodities have finally responded to the persistent overbought reading of the 14-week RSI.

The question is: will the index quickly rebound, retaking support, or will the move to new highs prove to have been a false breakout? How commodities trade this week will go a long way toward answering this question. 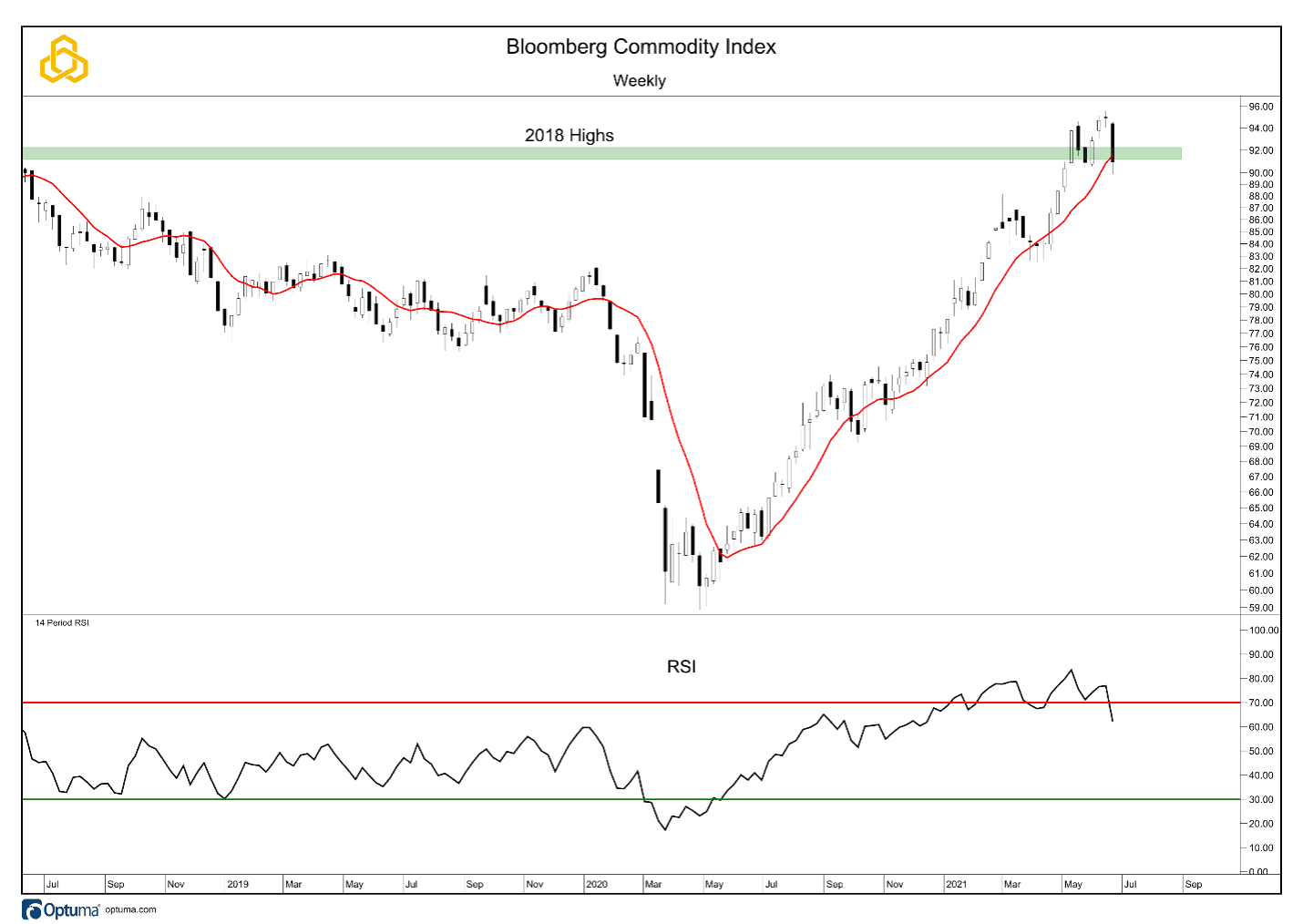 Within the commodity complex, Energy held up the best and remains above near-term support. Precious Metals and Industrial Metals were under pressure but are also above support. Agriculture saw selling intensity increase during the week. 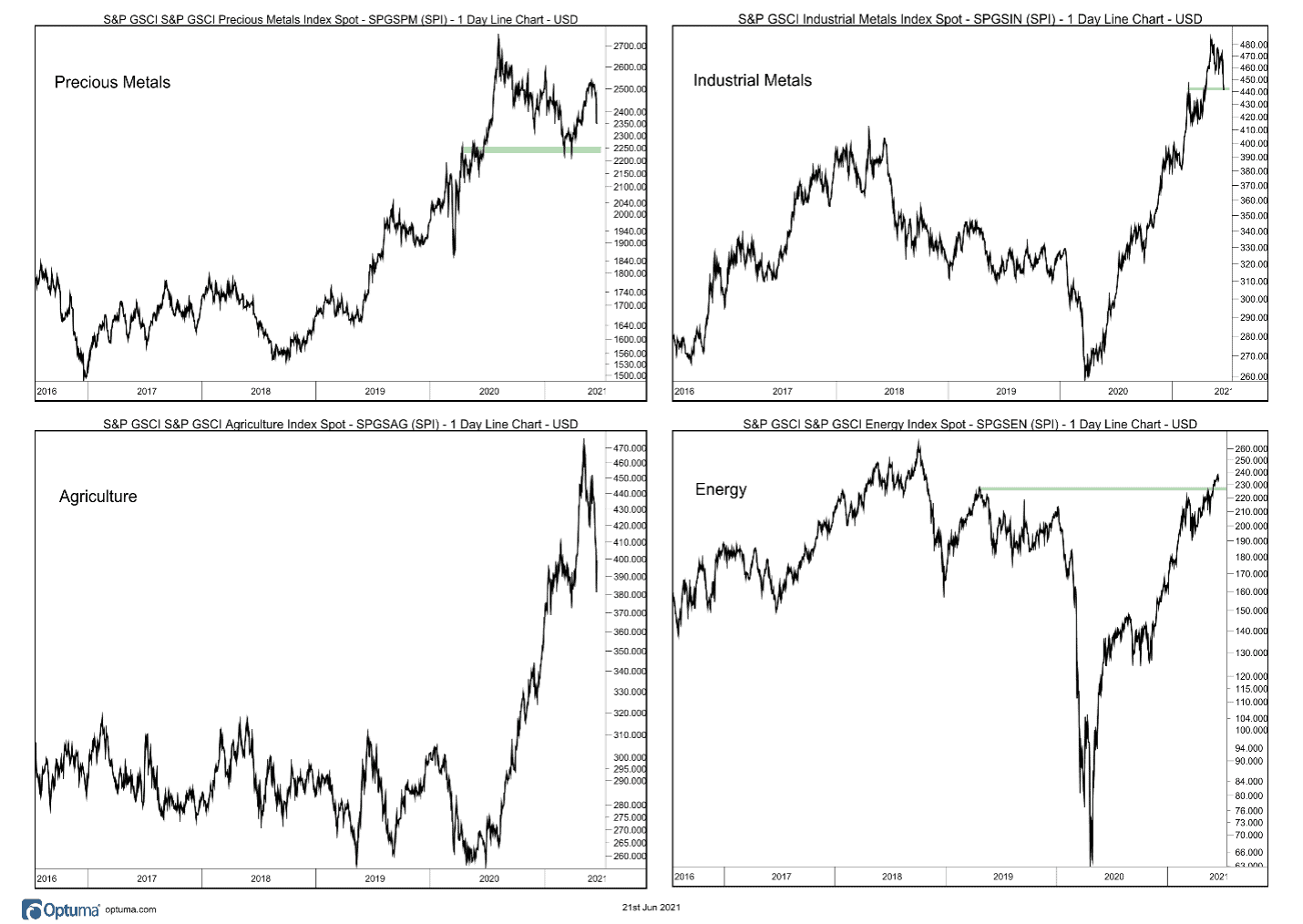 Aside from the strong move higher at the long end of the treasury curve, the U.S. Dollar Index was the other key market last week. The dollar’s move to the upside took out the 10-week moving average and provides the index with breathing room relative to price-based support. Thus far, strength has not broken the string of lower highs, which has been in place since last March. A close above $93.50 would serve to reverse this trend. The 14-week RSI is moving higher but remains neutral currently. 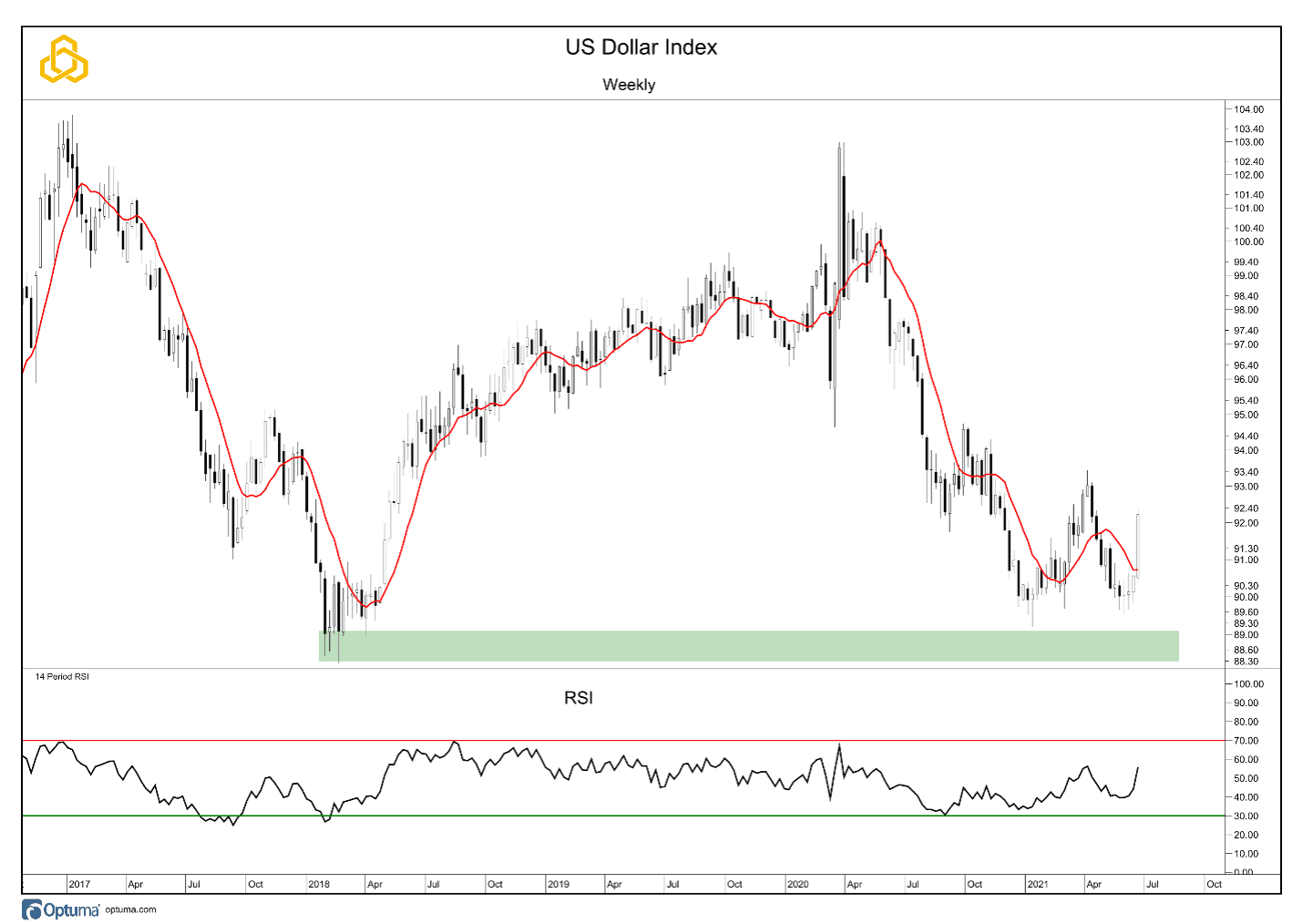 Is pressure on equities, and the “reflation” theme, likely to persist or is this simply a pause in existing trends? We have highlighted the important levels for key markets which, if broken, will help answer this question. The dollar and treasuries will likely provide the clearest signals. Further strength in these two assets will most probably coincide with a continued unwind of long positions in commodities and the equities that are most exposed to them.