This year (2018) will mark the 10-year anniversary of the global financial crisis, which also ushered in the worst economic downturn in the U.S. since the Great Depression and one of the worst bear stock markets in recent history. Those who lived through that troubling period (like us) remember the extreme swings in volatility and the compounding losses. When the bear market finally bottomed out in March 2009, the S&P 500 Index had shed 56% of its value.

A bear market of that magnitude is rare—according to Yardeni Research, only one other bear market since 1929 has been worse. (That was between 1930-32, when the S&P 500 lost 83% of its value.) However, Investors should pay attention to the magnitude of losses, perhaps more so than their frequency, because of the time it takes to recover from these kinds of extreme losses.

In the case of the last bear market, it took around four years for the S&P 500 to make up all of its lost ground. Add to that the 517 days from peak-to-trough of the bear market itself, and you get a total of five-and-a-half years of time lost trying to reclaim market value.

When investors are just getting started with their investment plans, usually through a workplace retirement plan like a 401(k) or 403(b), one of the first lessons they are taught is to start early. Time spent out of the market can never be regained. Someone who starts saving and investing 10 years earlier than someone else ends up with a significantly larger nest egg over the long term.

But the same lesson applies for time spent trying to recover from losses. Investors tend to think about market risk in terms of lost value, but the loss of time is also an important consideration. At Potomac, we like to emphasize the lesson of the “catch-up game”—meaning it takes a gain greater than an investment loss to recover fully from a decline in value. (This is illustrated in the table below.)

What this table doesn’t show is how much time it takes to achieve recovery gains. An analysis by CFRA and S&P Dow Jones Indices shows that for the average bear market since 1945 full recovery took more than two years. But for the three “mega-bears” that occurred during this time (when the S&P 500 dropped 40% or more), full recovery took almost five years.

The current bull market just turned nine earlier in March, and it’s only been surpassed in length and cumulative return by the 12-year bull market of 1987-2000. While stocks have risen over 300% during this nine-year period, it hasn’t been a completely smooth ride. In this bull market there have been six corrections (market losses of 10% or more), most recently in February when stocks dipped over fears of inflation and higher interest rates.

Corrections occur more frequently than bear markets. Since World War II, stocks have corrected every 2.8 years, according to S&P Dow Jones Indices. Bear markets have occurred more often than many investors may think—every 4.8 years since WWII. (See chart below.) 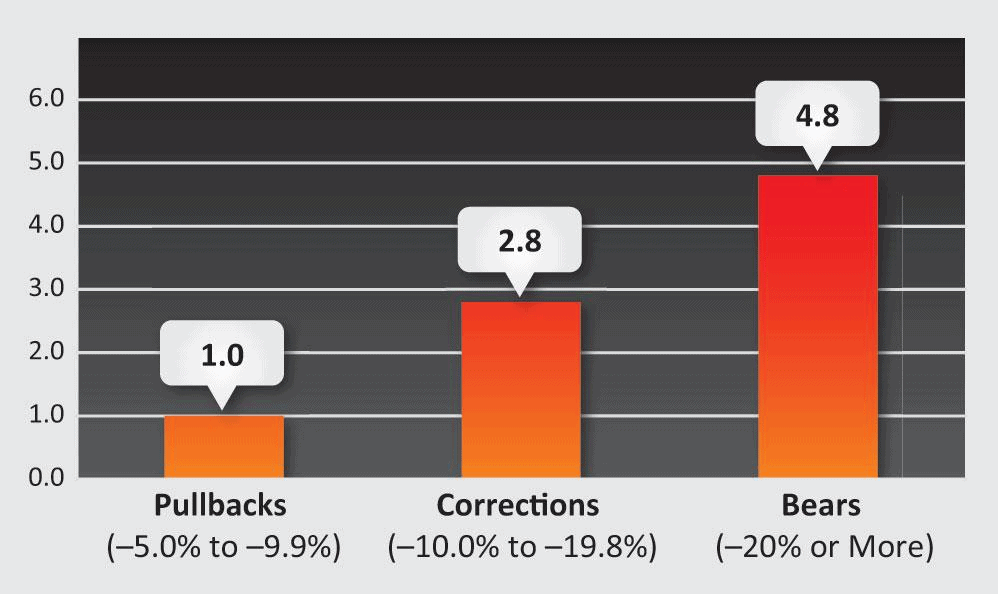 Bull markets do not die of old age, but that is no reason for investors to grow complacent about the risk of a near-term pullback or potential bear market. Looking at recent history may give some investors reason to find comfort. A long-term view can reveal a greater risk of significant investment loss than many investors may realize.

Ideally, investors would want to avoid losses altogether. That would require the foresight to step out of the market at the very peak and re-enter at the very bottom. We don’t profess any sort of foresight to allow us to perfectly time market peaks and troughs. Any asset manager who does should be viewed with suspicion. What we seek in our investment strategies is to avoid catastrophic losses that require a significant amount of time for recovery.

Market returns can be lost more easily than they can be gained. So, the key to successful investing over the long term is to contain major losses that take too much time or too much exposure to volatility to recover from.