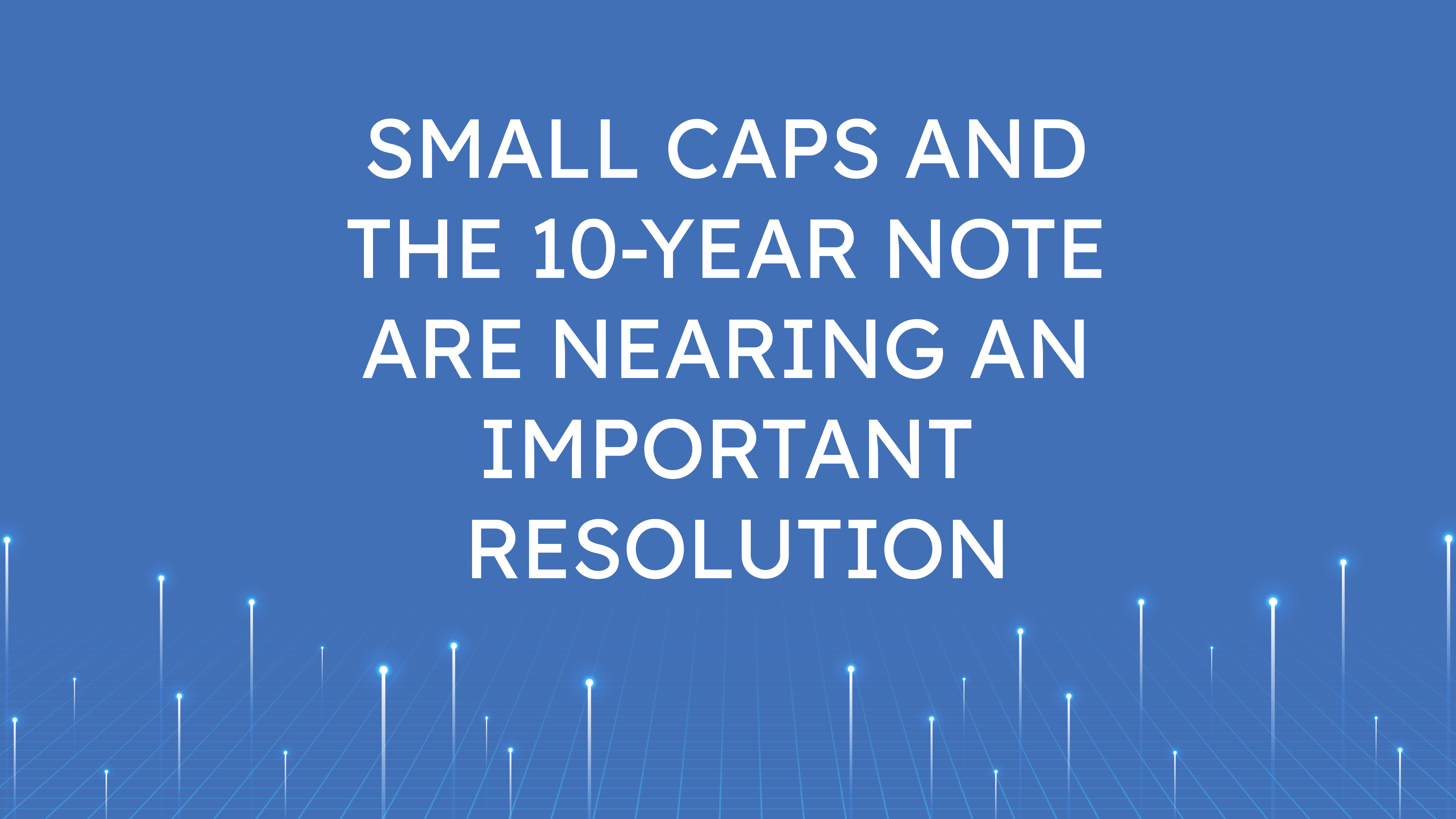 After trading to a record high last Monday, the S&P 500 once again paid a visit to the rising 10-week (50-day) moving average. This measure of the intermediate-term trend has been a solid guide, acting as support to pullbacks and proving opportunities for the “buy the dip” crowd. Near-term price support is at the 4,250 level, while longer-term price support is in the vicinity of the rising 40-week moving average, near 4,000.

The 14-week RSI remains in an overbought position. 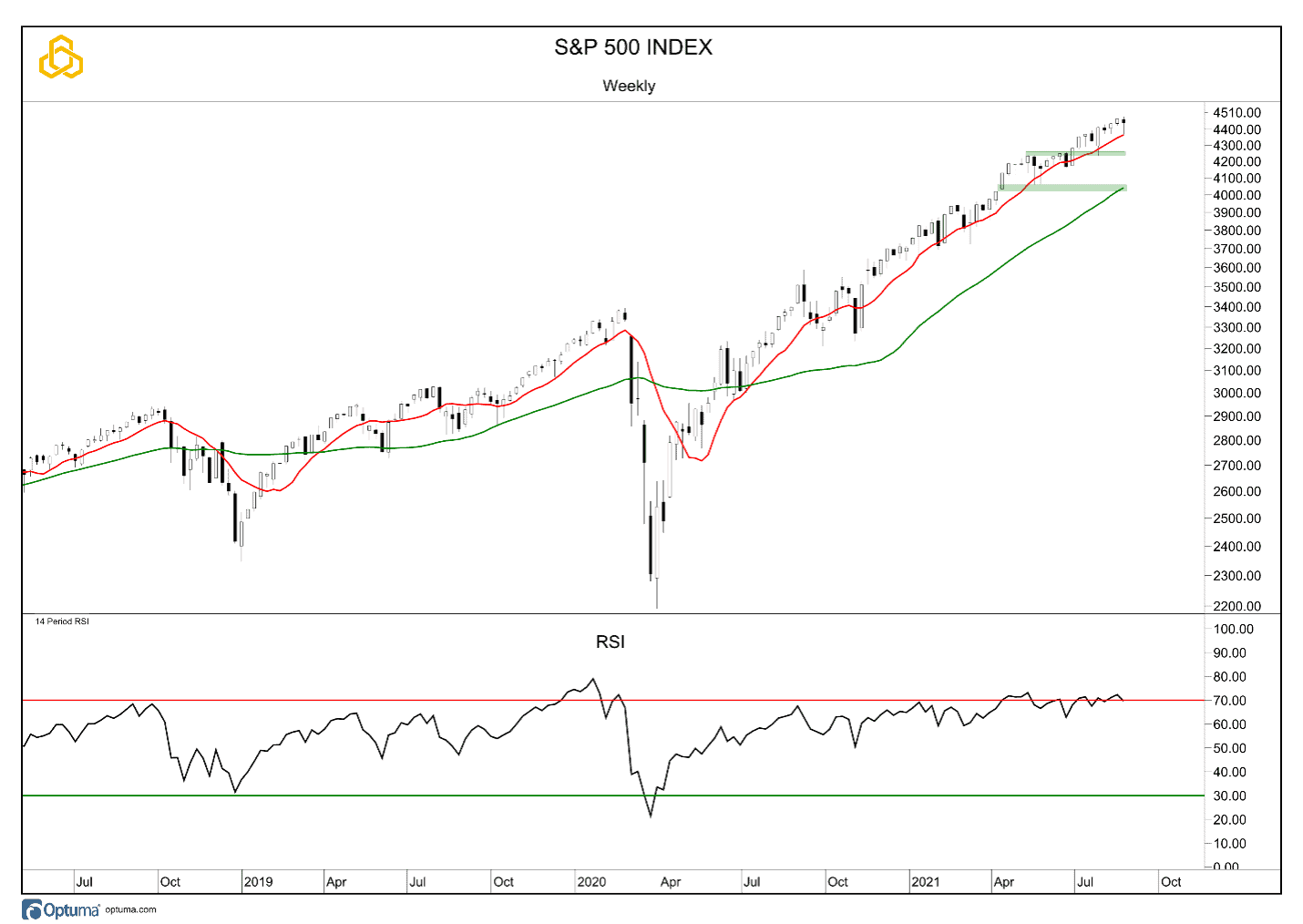 The S&P Small Cap 600 Index remains below the 10-week moving average which is beginning to move lower. Support in the 1,260 – 1,300 zone, which holds the rising 40-week moving average, continues to hold. The biggest question that we have is “has the consolidation that began in March been a pause that allows the long-term moving average time to catch up”? We believe that there will be a resolution soon. The 14-week RSI has not broken from a bullish regime, but the series of lower highs can be viewed as bearish.

Regardless of trends and momentum on an absolute basis, the relative trend is bearish with the ratio making a series of lower highs and lower lows while trading below resistance. 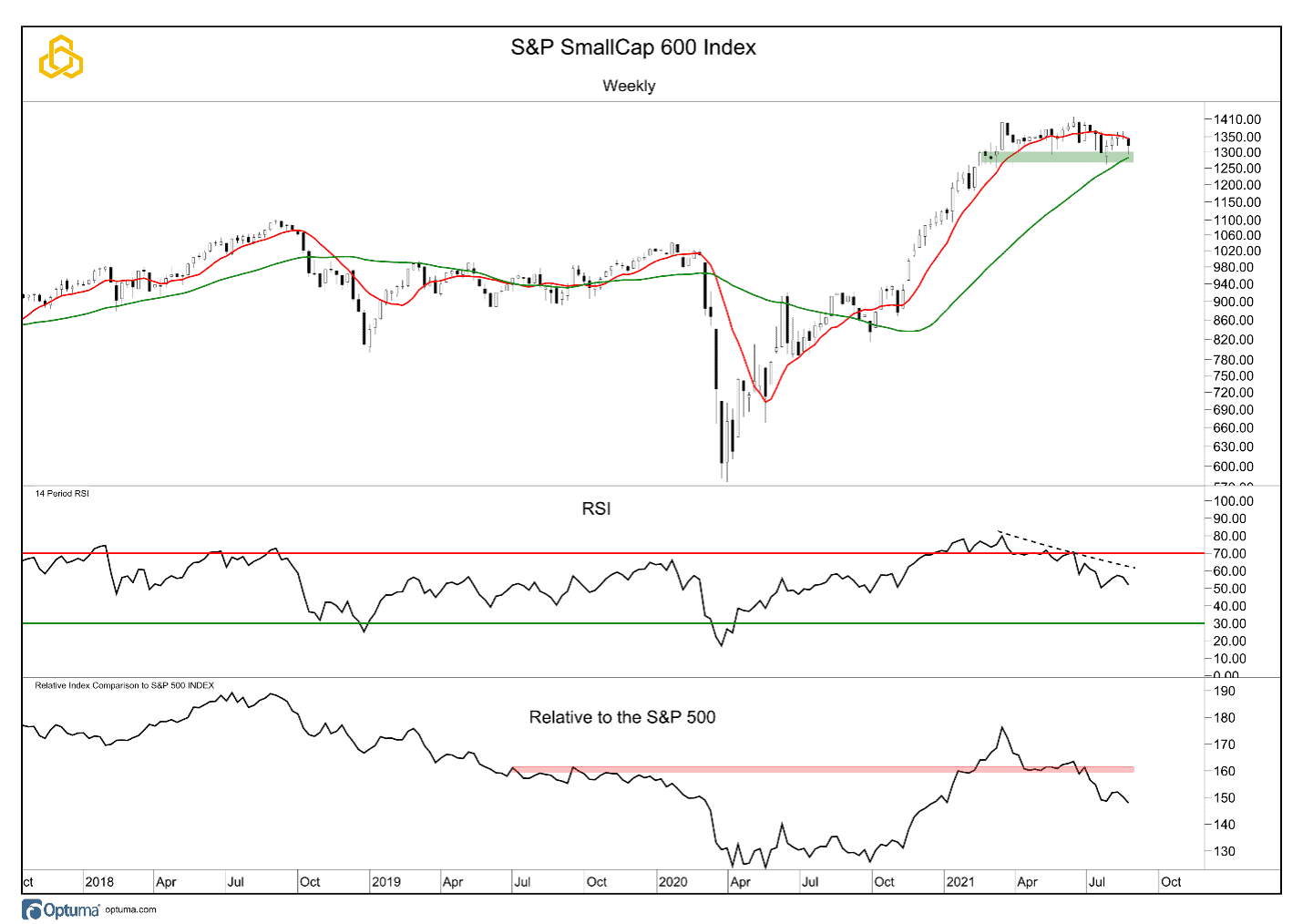 Within the Small Cap universe, all sectors were lower on the week: 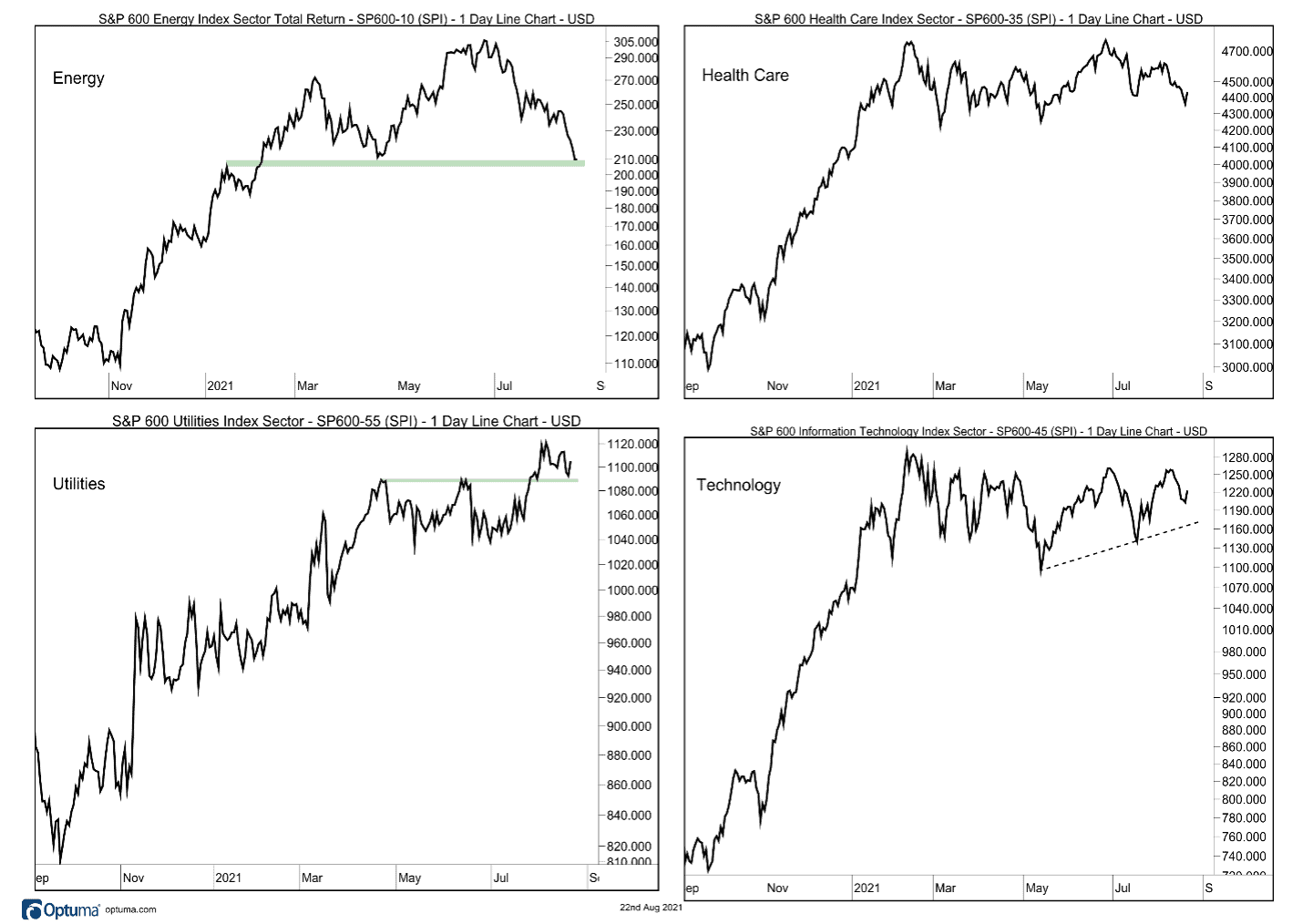 The Nasdaq Composite closed the week near the top of the range after holding the rising 10-week moving average. Near-term price support is in the 14,300 – 14,400 range while support to the long-term trend remains near 13,000. The 14-week RSI is just below overbought levels and has been making lower highs recently.

On a relative basis, the NASDAQ continues to stall above the support level that we have been highlighting for the past few weeks. 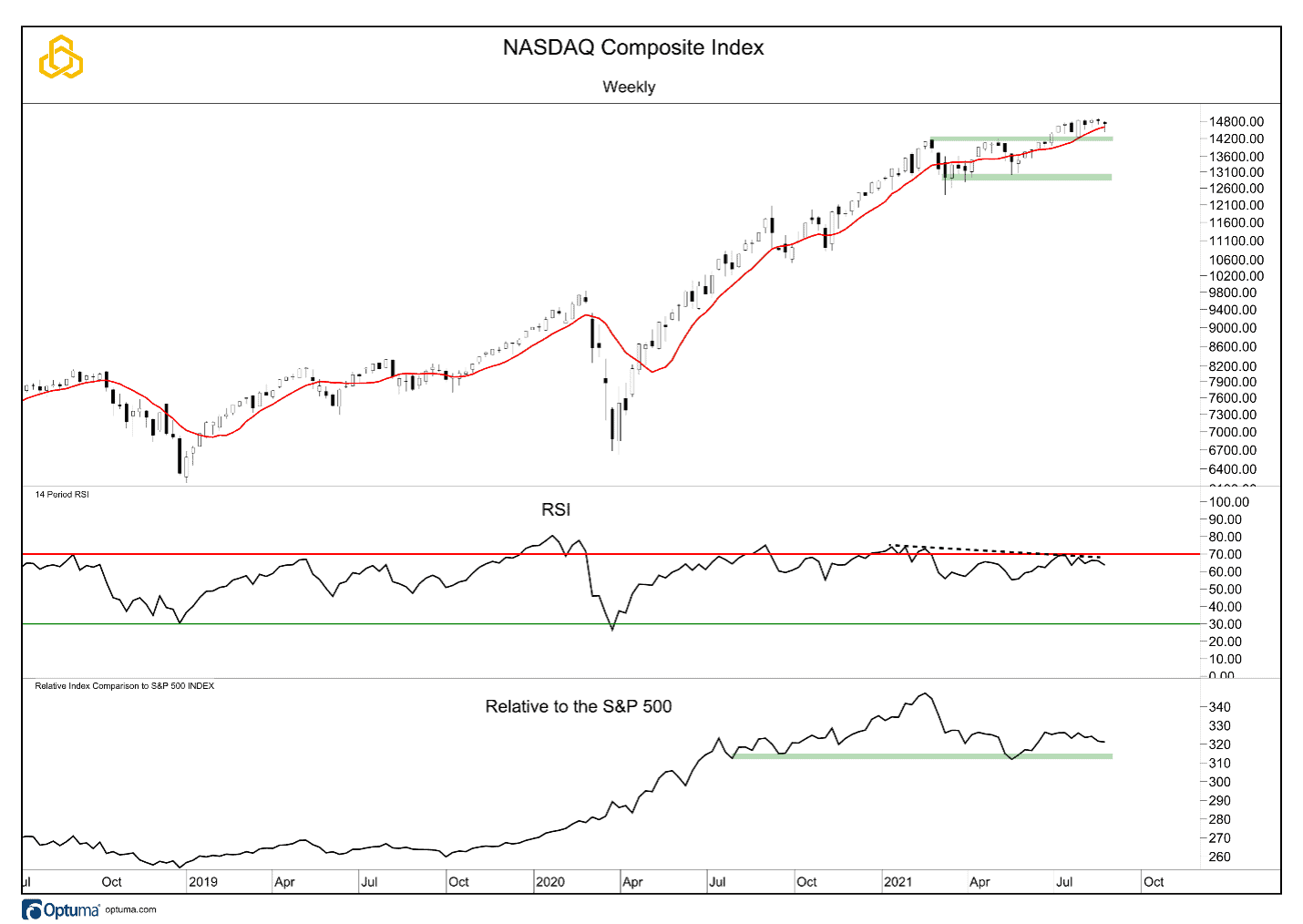 The 10-Year Note closed slightly higher on the week but remains trapped between the declining 40-week moving average and the rising 10-week moving average. For now, support at the $134 level continues to hold. A break to the upside (lower rates) would likely be a bullish tailwind for the NASDAQ and a bearish headwind for Small Caps. A move lower could have the opposite impact.

The 14-week RSI is in the middle of the range, confirming the price action for the Note. 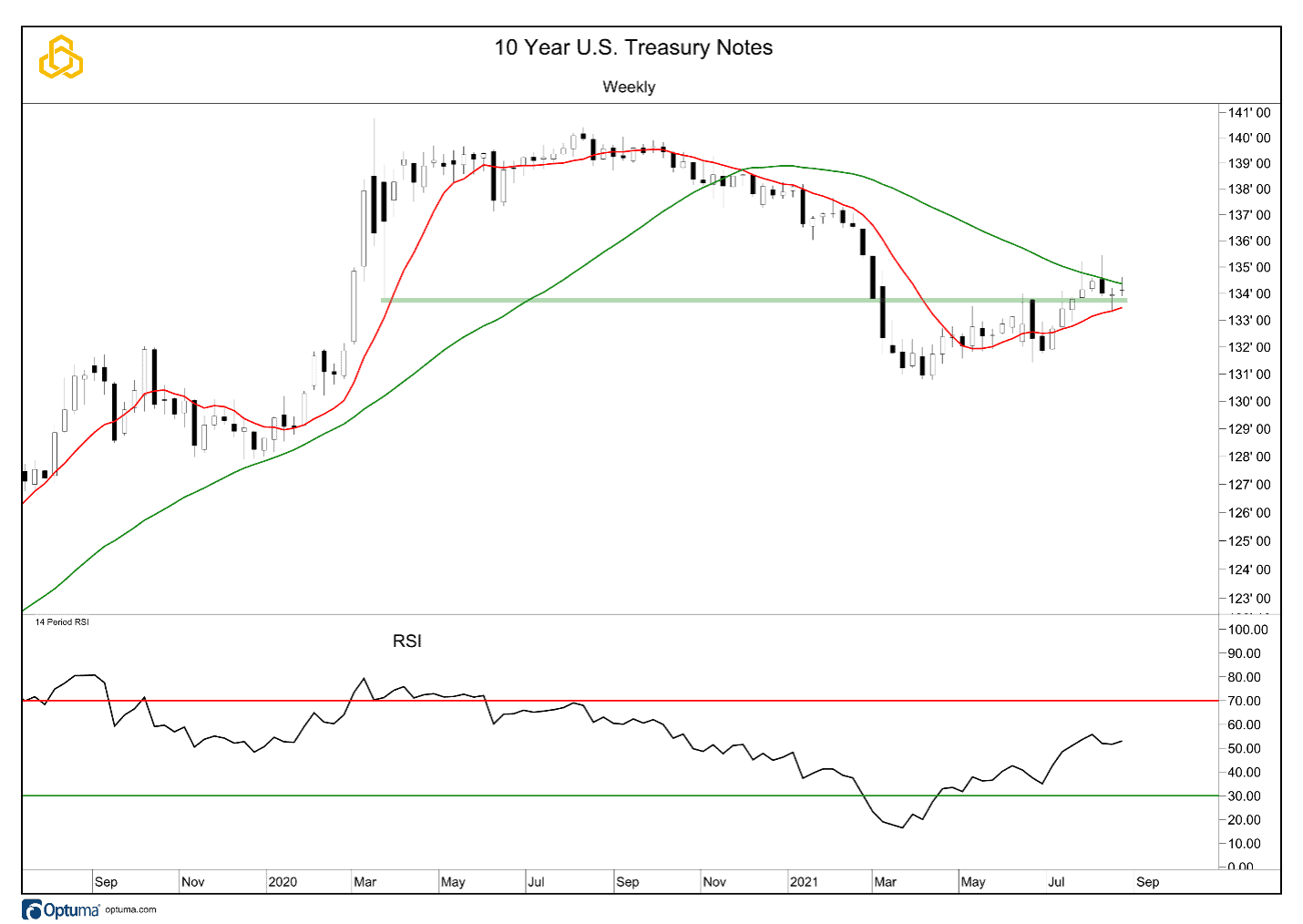 Across the curve, yields are volatile. There is some evidence that the downtrends are beginning to reverse further out on the curve, but it is too early to say that rates have made a definitive move to the upside in our view. 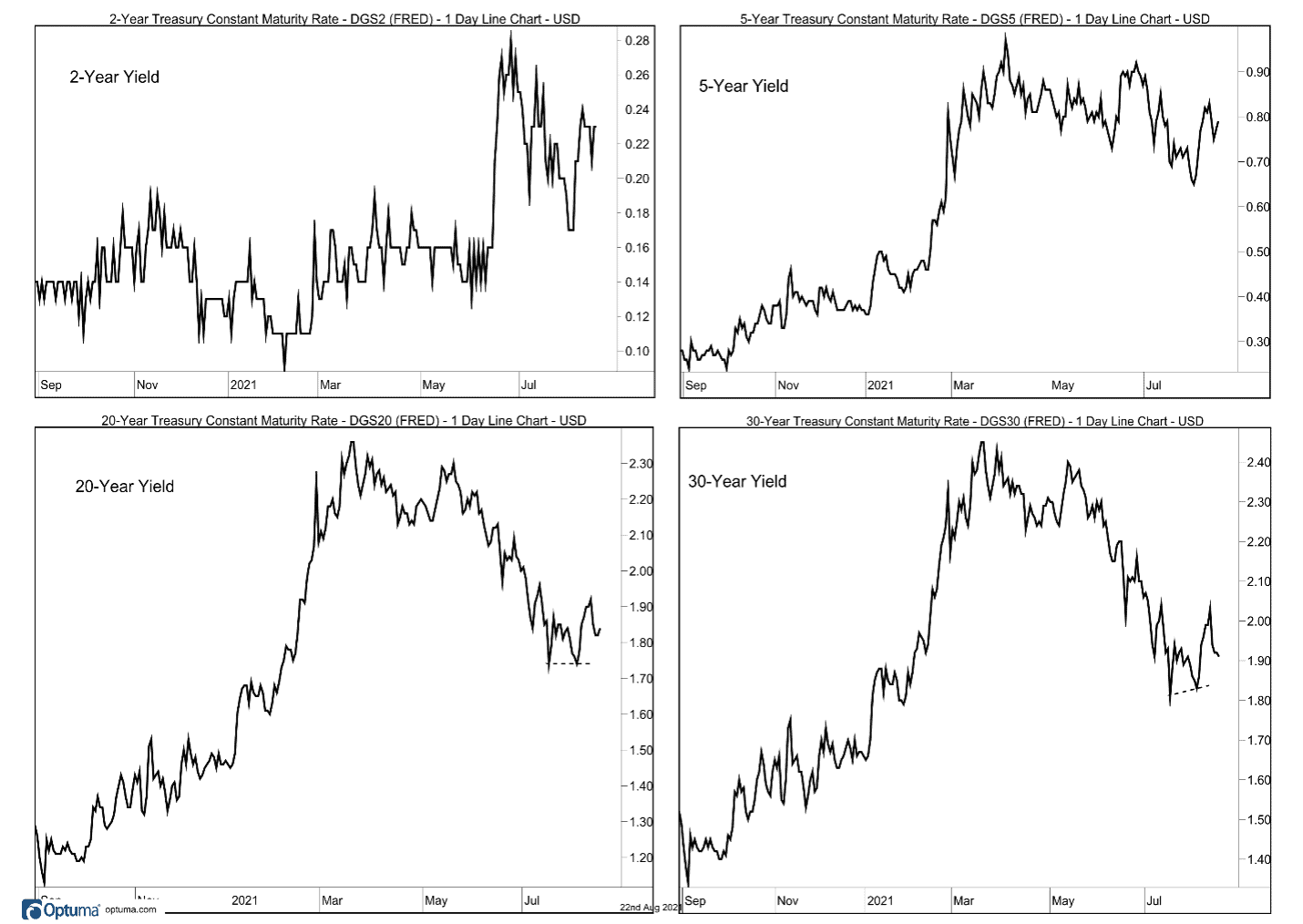 The Global Dow closed the week below the 10-week moving average but remains in a consolidation. The uptrend from the March 2020 lows remains in place as the rising trend line provided support to last week’s decline.

Relative to the S&P 500, the trend in global equities is under pressure and has not been able to build much upside traction on rally attempts. The U.S. over the rest of the world remains an enduring theme. 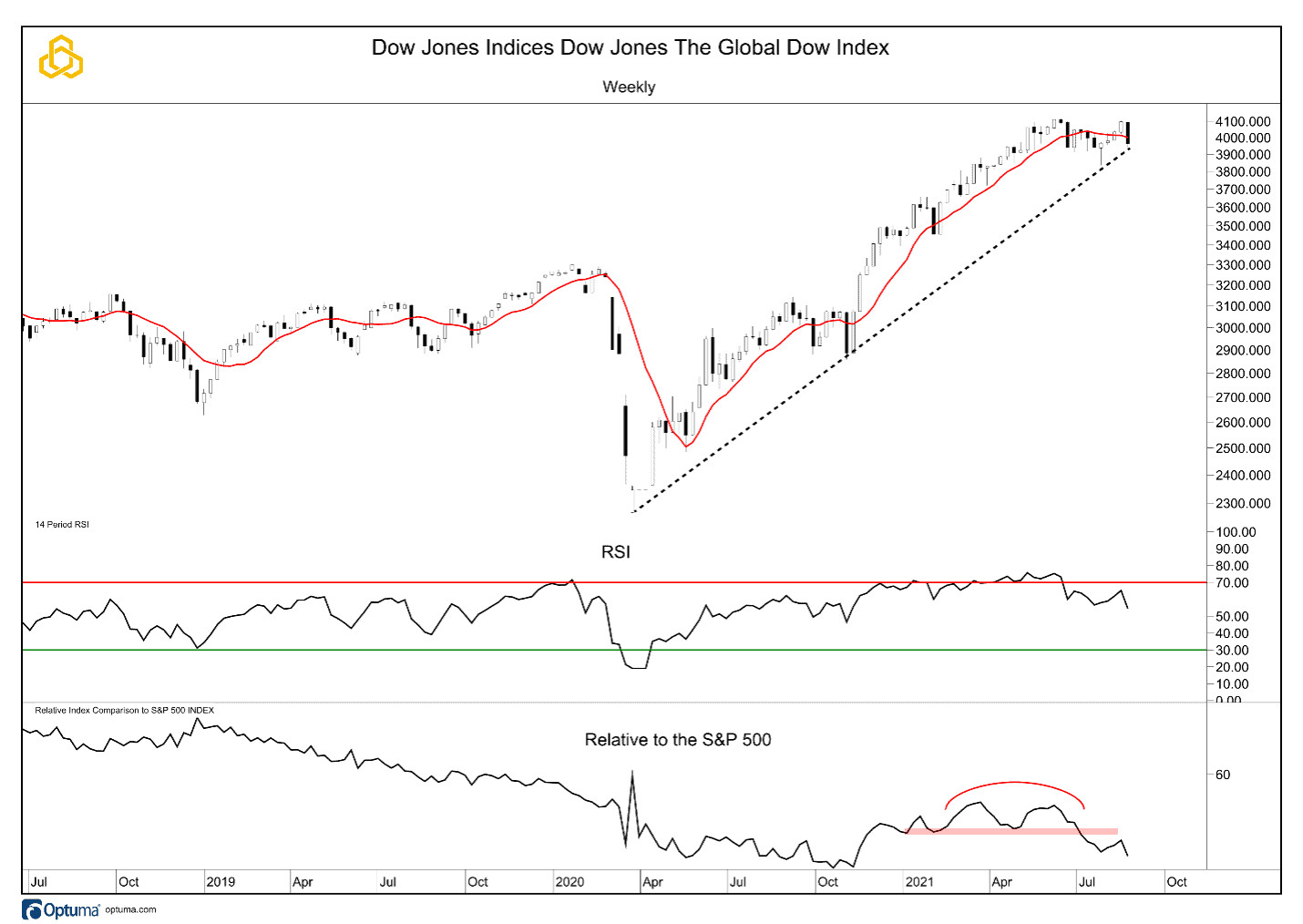 The Bloomberg Commodity Index came under intense pressure last week and closed below the 10-week moving average. The pullback has brought the index to support at the 2018 highs. Failing to hold that level will solidify the move above 91 as a false breakout.

On a relative basis, bulls will make the case that Commodities are building a base. The bears will point out the lack of upside traction on rally attempts. This is especially interesting because we would expect to see commodities lead in an environment of higher inflation. For now, it seems that the better “inflation hedge” is equities. 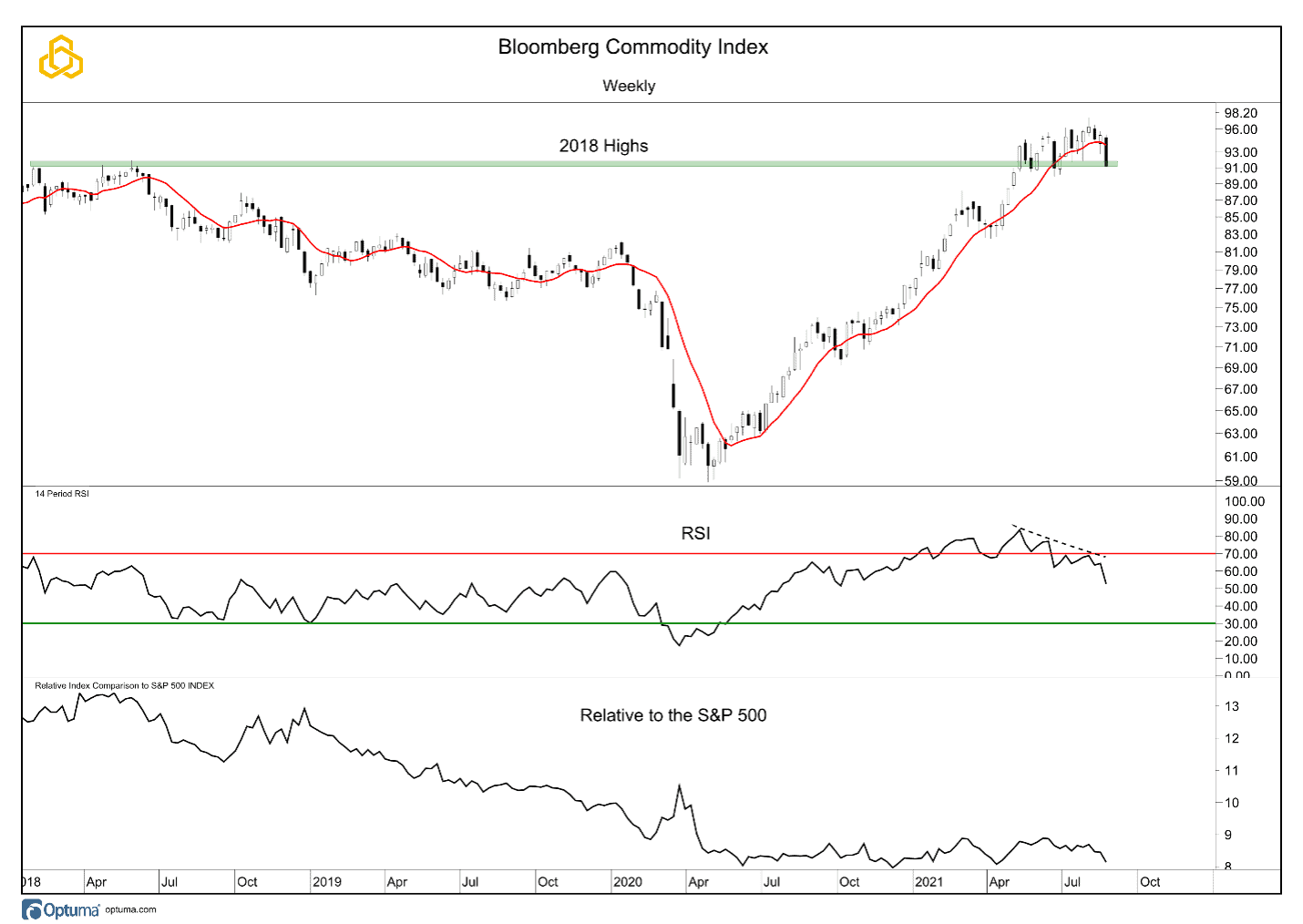 Within the commodity complex, there are signs of distribution within Energy, something that has been tipped by the performance in Energy stocks over the past few months. Agriculture is pulling back, after a rebound, to test support. Precious Metals are a solid “do nothing” until a clear trend develops. Industrial Metals remain in a consolidation. 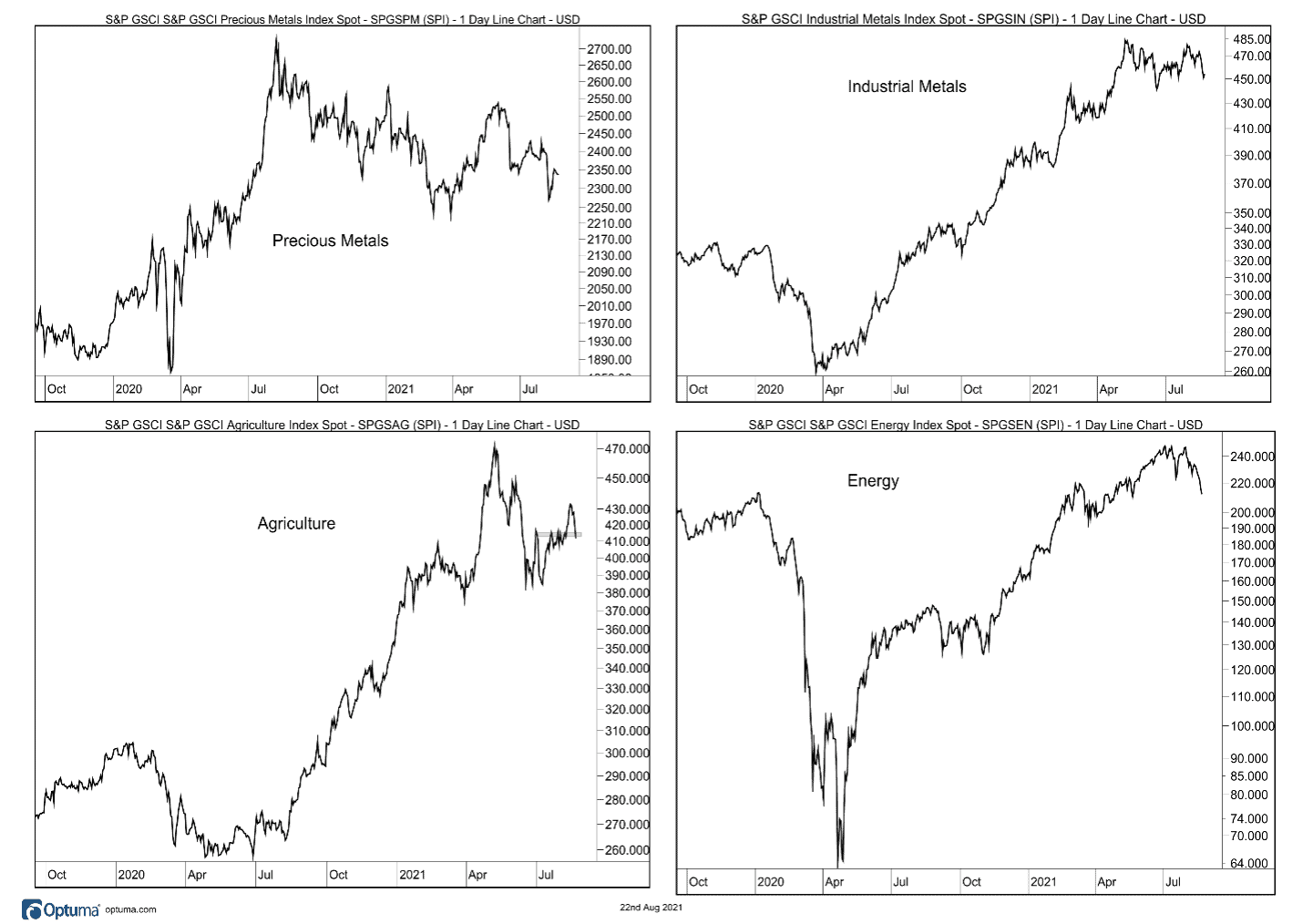 The U.S. Dollar Index continues to work higher and has broken above near-term resistance. This is perhaps a cause of the weakness in the commodity complex last week. Recently, the rising 10-week moving average has acted as support to pullbacks and we can now add the 93 level as price-based support. Above 93, the path is higher.

The 14-week RSI may be in the process of shifting to bullish ranges after a series of higher lows. 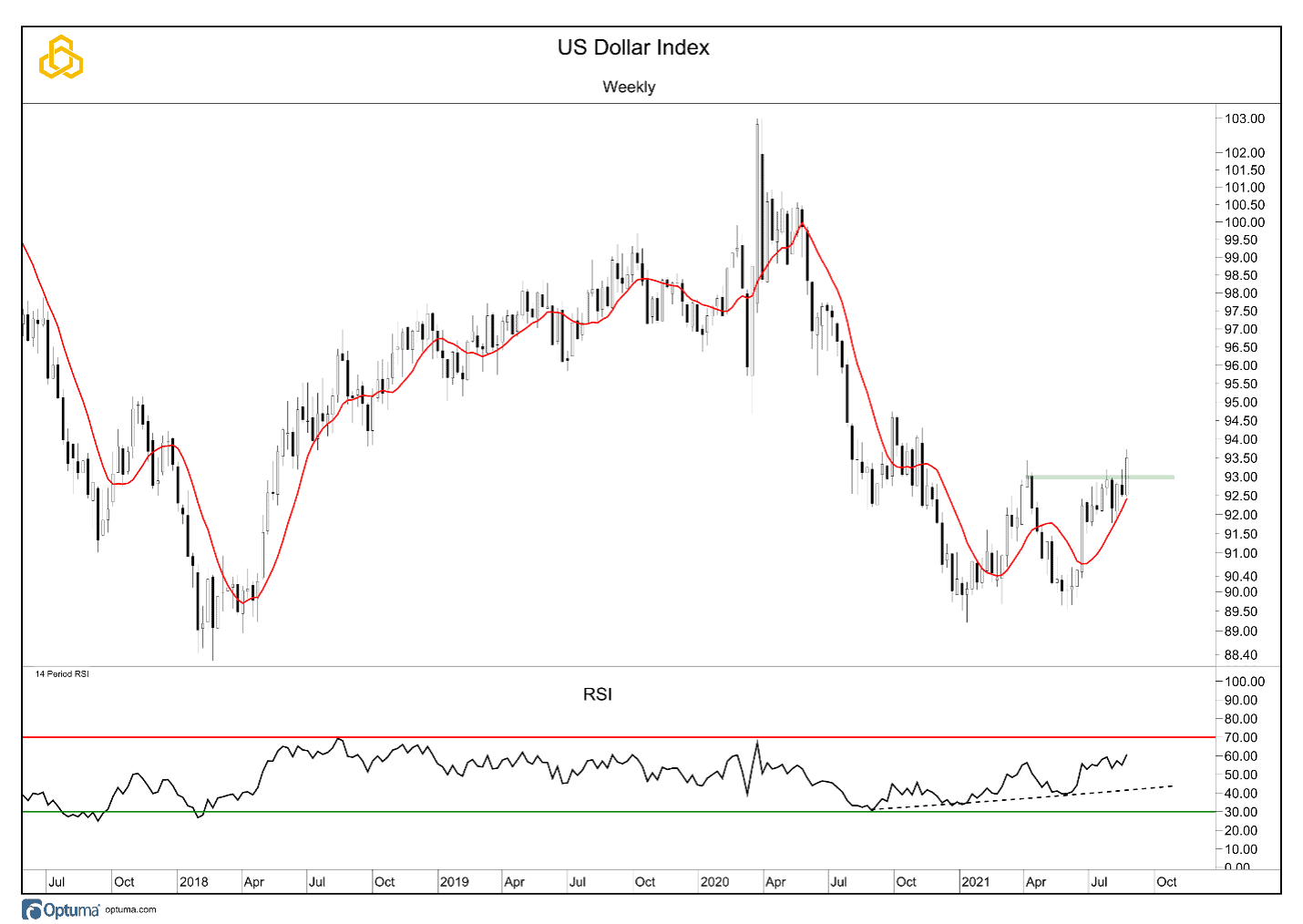 The rising 10-week moving average remains a key guide to the uptrend for the S&P 500 after holding, once again, last week. Both Small Caps and the 10-Year Note are likely nearing resolutions to their consolidations. The latter could be a key driver of relative trends in the equity market. Commodities are on watch for a breakdown despite all the “inflation fears” in the market. The breakout in the dollar opens the door to further upside if it holds.