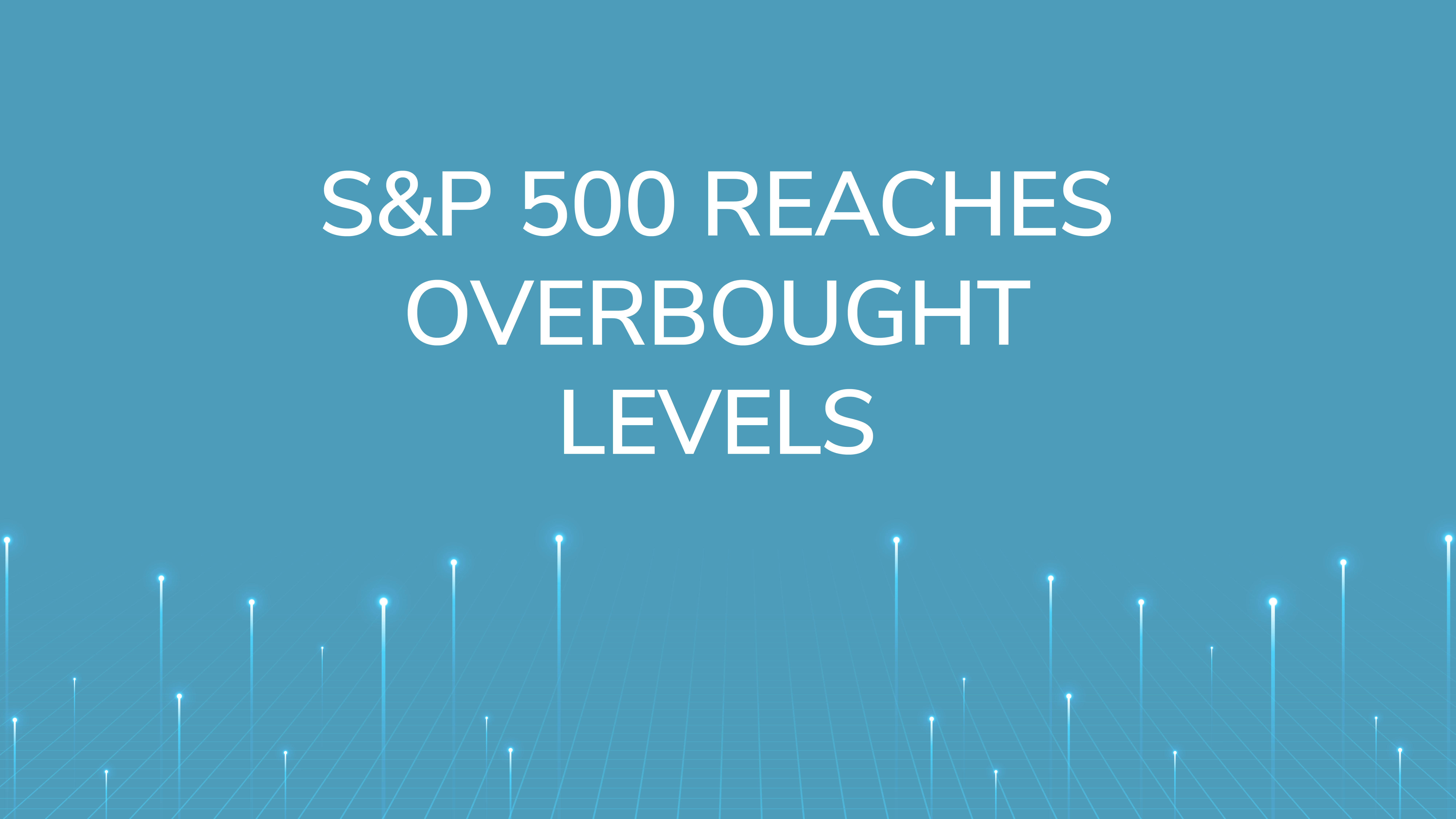 The Shanghai Composite Index is on the verge of a breakdown as it lags the S&P 500 and the STOXX Europe 600. The S&P 500 traded to another record high and is now overbought. We are watching for a potential leadership shift as small caps lose their luster while the Nasdaq continues to improve. The sentiment picture is mixed despite record highs in the U.S.

The Shanghai Composite Index is on watch for a breakdown as it tests the 200-day moving average while trading below the, now declining, 50-day moving average. The RSI is moving lower after failing to become overbought when price made a new high in February, signaling that a shift in momentum may be underway. Regardless of the absolute price trend, the relative trend tells the story as the Shanghai Composite has been underperforming the S&P 500 since March 2020 and has traded to a five-year low this week. The Shanghai Composite is also lagging relative to the STOXX Europe 600 Index and is on the cusp of breaking support. 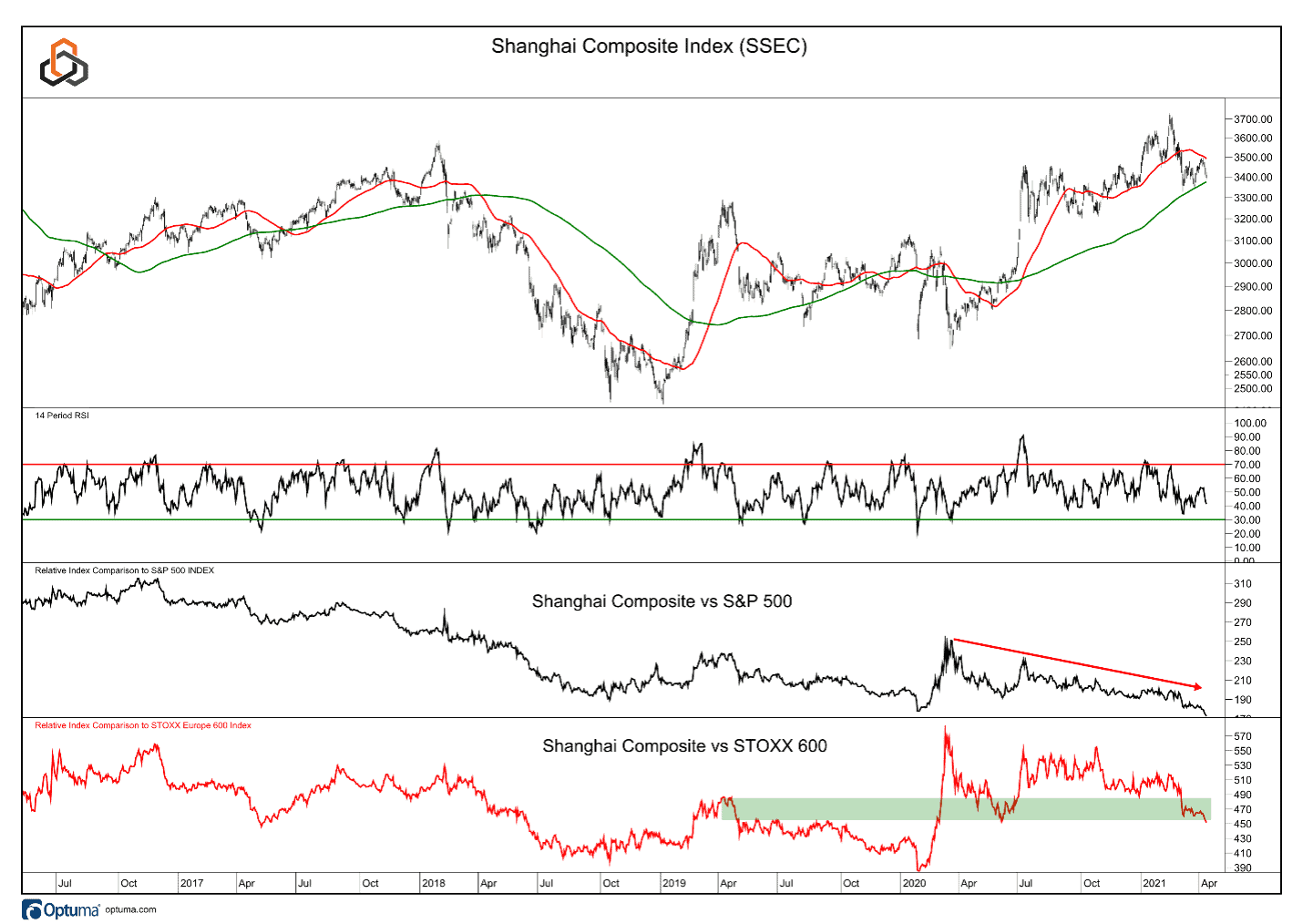 The S&P 500 continues to grind to the upside, closing at another record high yesterday. The index has traded to the levels that we have been highlighting as upside potential, near 4,150, as it remains above the rising 50 and 200-day moving averages. Unlike the highs that were reached in mid-March, this week’s high was accompanied by an RSI that has reached overbought levels. While this does provide a stronger momentum confirmation, it also increases the odds that the trend may be due for a pause. 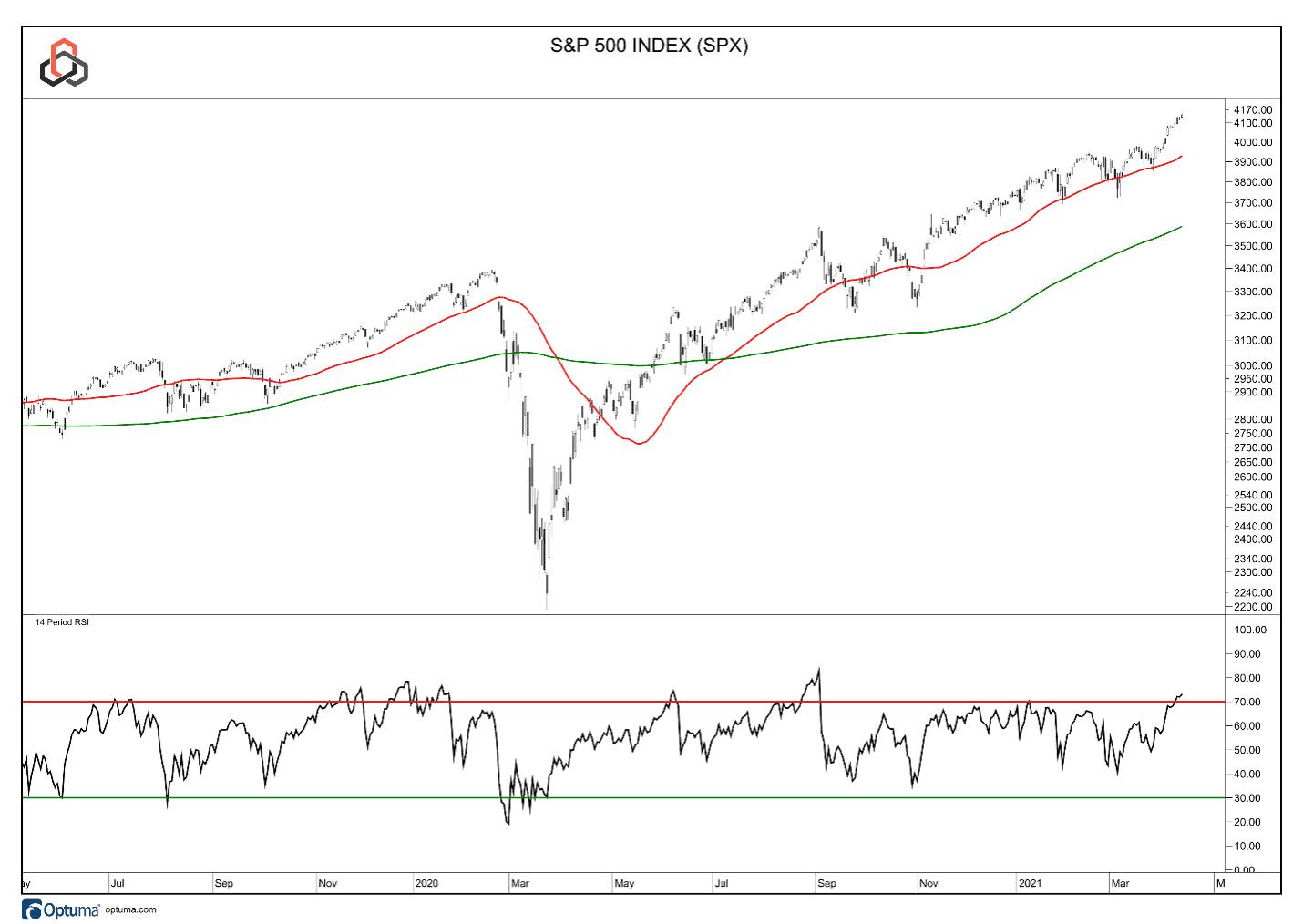 The S&P Small Cap 600 Index remains in a consolidation on an absolute basis as it begins to test support at the rising 50-day moving average. The index is still well above the 200-day moving average, a proxy for the long-term trend in price. The current consolidation is playing out after small caps became extended to the upside. Thus far, the RSI is holding within a bullish regime (above the 40 level), so the benefit of the doubt remains with the price trend from the March lows.

The aspect that has caught our full attention is the breakdown in the relative strength vs. the S&P 500, which has taken the small caps below support. This begs the question, “is the period of small cap outperformance coming to an end?” 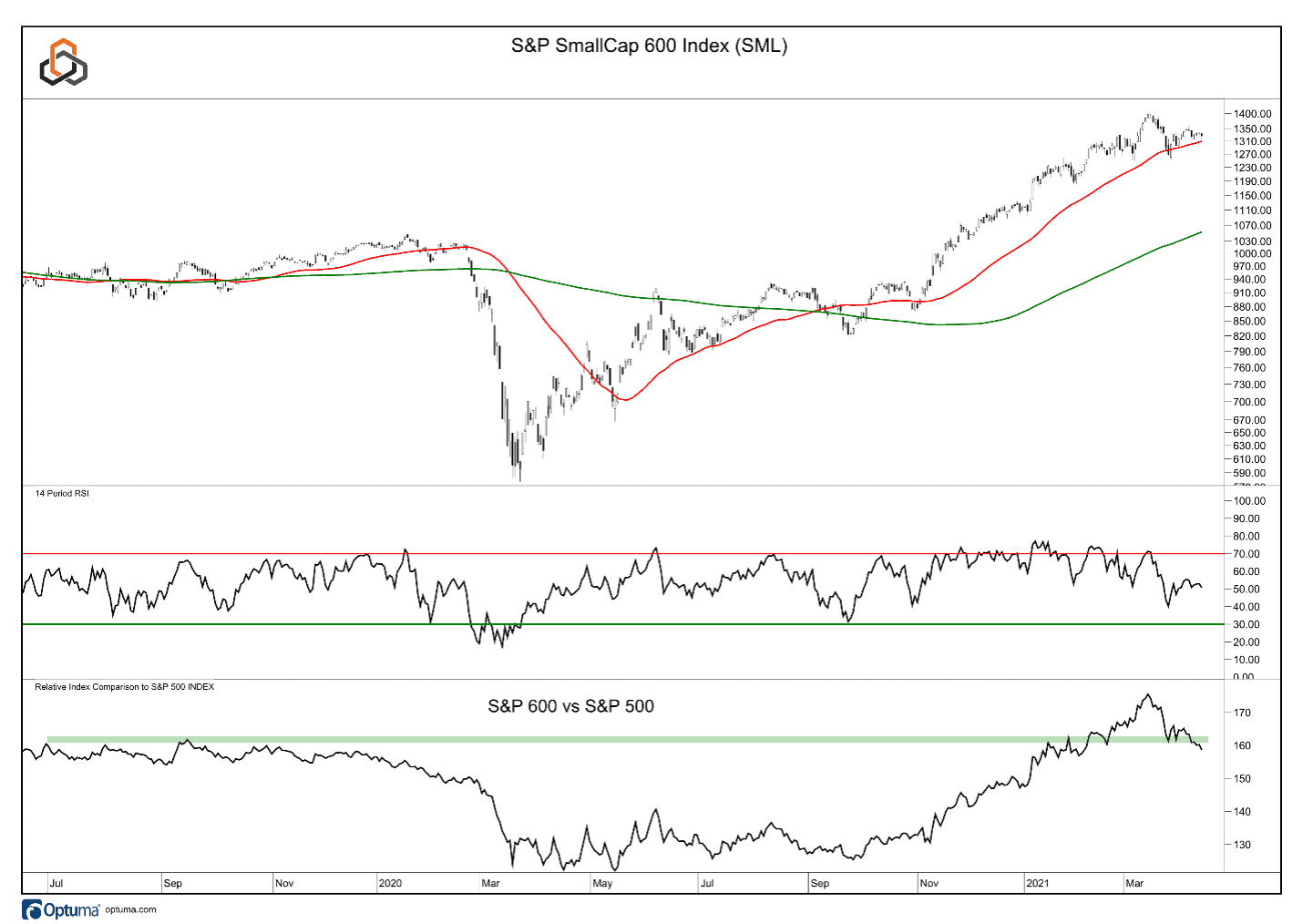 The Nasdaq Composite Index remains in a consolidation within the ongoing uptrend from the March 2020 lows. As we noted on Monday, the index has regained the 50-day moving average after holding support at the September high. The RSI is moving higher, with room to overbought levels, after failing to become oversold during the consolidation. Odds continue to favor a move to new highs. On a relative basis, the Nasdaq has been moving sideways since July but support has held. We now look for a break of the March peak in relative strength to signal that the Nasdaq is beginning to retake its leadership position. 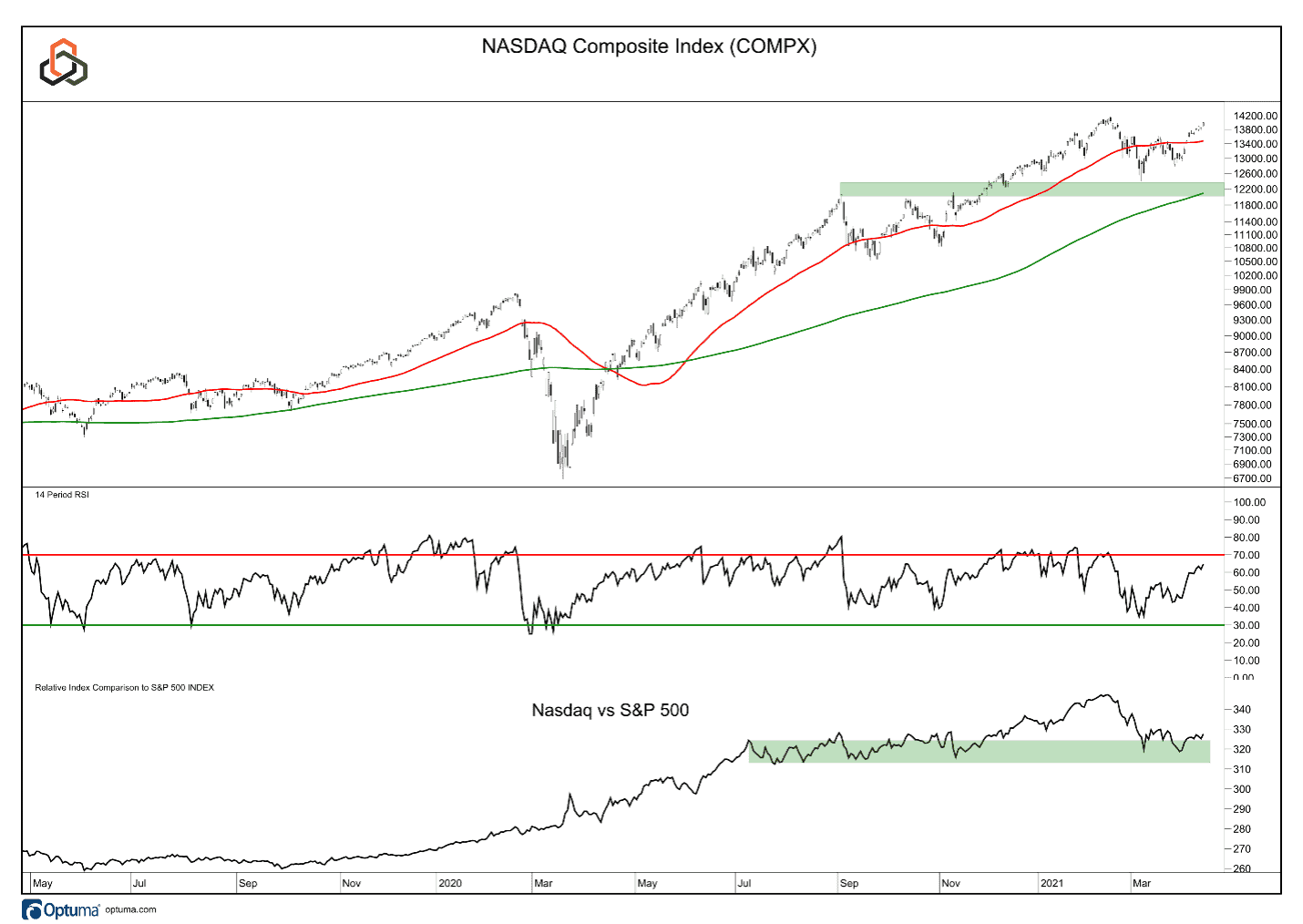 The S&P 500 Volatility Index (VIX) continues to trend lower as the S&P 500 trades at record highs. Last week marked a decisive break below the 20 level that had held since before the COVID pandemic began. While a lower VIX reading is not, by itself, a reason to shift to a contrarian bearish stance, we do note that this sentiment gauge is no longer providing a bullish tailwind for equity prices. 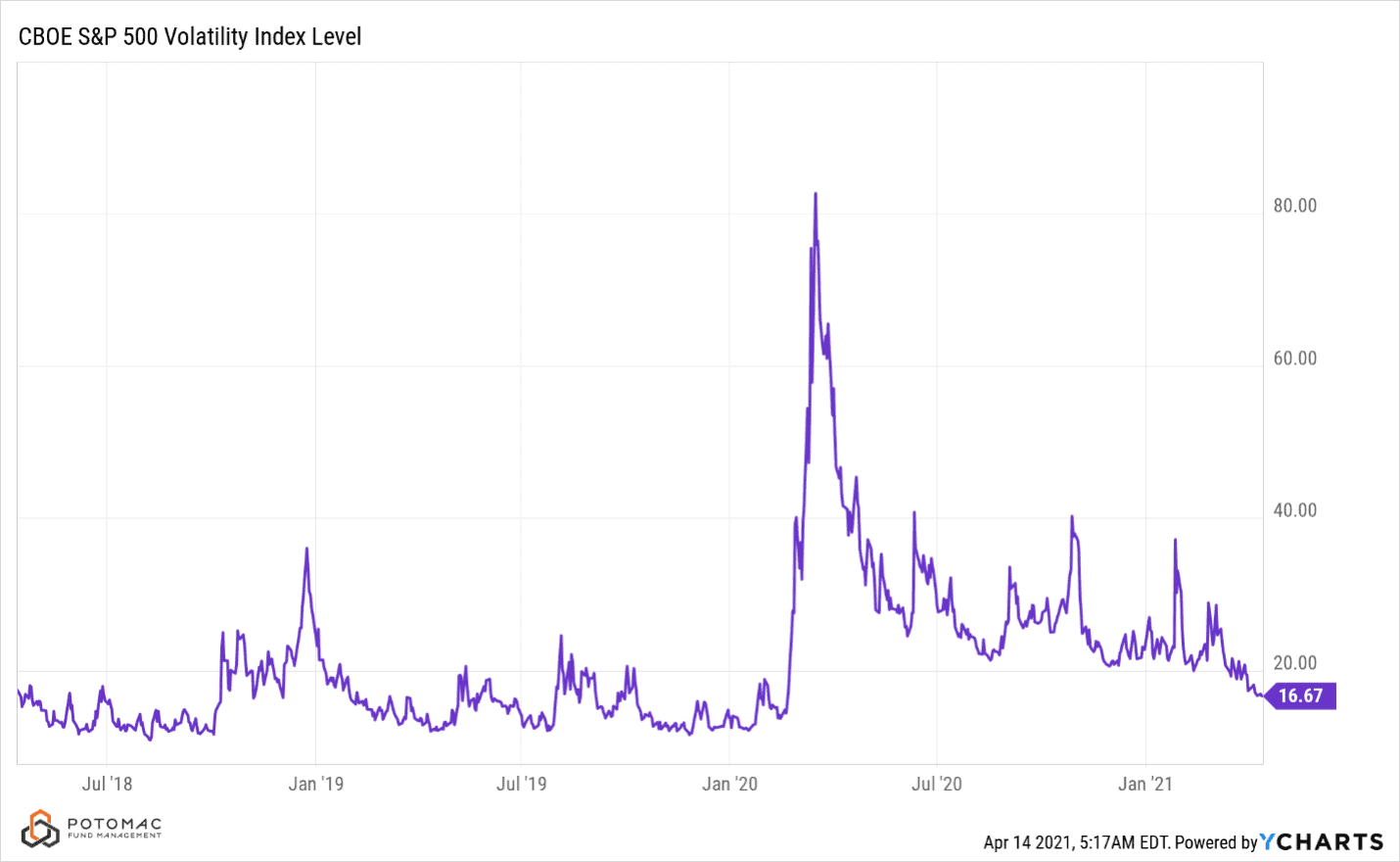 The CNN Fear & Greed Index is in a Neutral position at a reading of 51, down from 64 last week. It is surprising to see that this metric did not move higher with the S&P 500 trading to another record high this week.

The string of record high closes has taken the S&P 500 toward the 4,150 level that we have written was likely to be reached. Under the surface, there is a potential shift in leadership as small caps are breaking relative support. At the same time, the Nasdaq may be on the verge of retaking a leadership role. All of this plays out without a strong “tell” from the sentiment gauges.

The Shanghai Composite Index is on watch for a breakdown, which would likely carry important implications for global equity allocations.