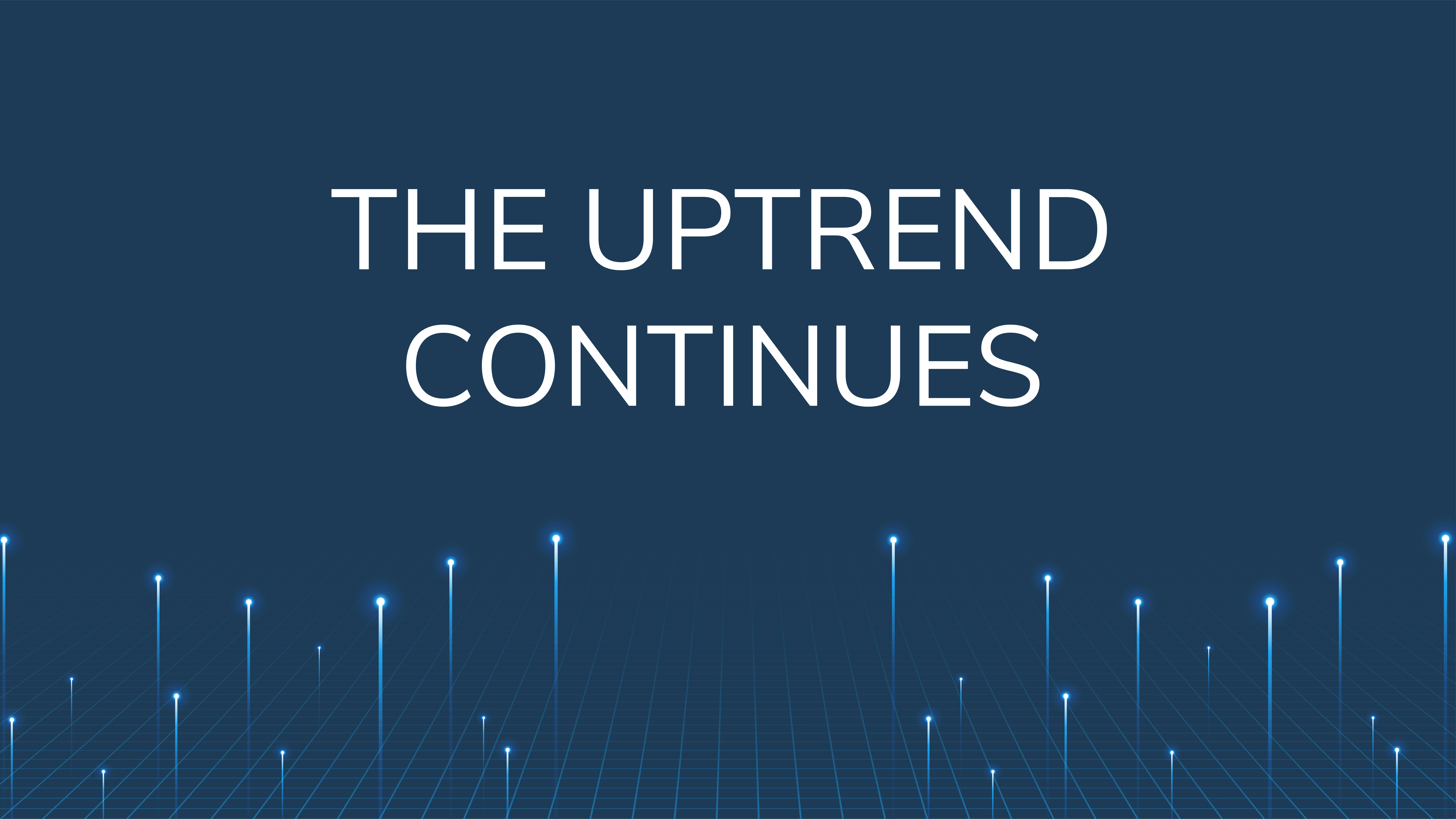 The uptrend from the March lows remains in place for risk assets with the S&P 500 trading to a new record weekly high while global equities hold above an important support point. Semiconductors traded to a weekly record; will this help the Nasdaq do the same? Commodities and the 10-year yield have moved toward resistance, which has implications for the global reflation trade that has been in place for more than six months.

The S&P 500 added 2.80% in the holiday-shortened week to set a record high close on a weekly basis for a second consecutive week. The uptrend that has been in place since the March 2020 lows remains intact and odds continue to favor a move to the 4,100 – 4,150 range. Support is in the area between 3,700 and 3,800 in the near-term with more important support near the 3,400 level. 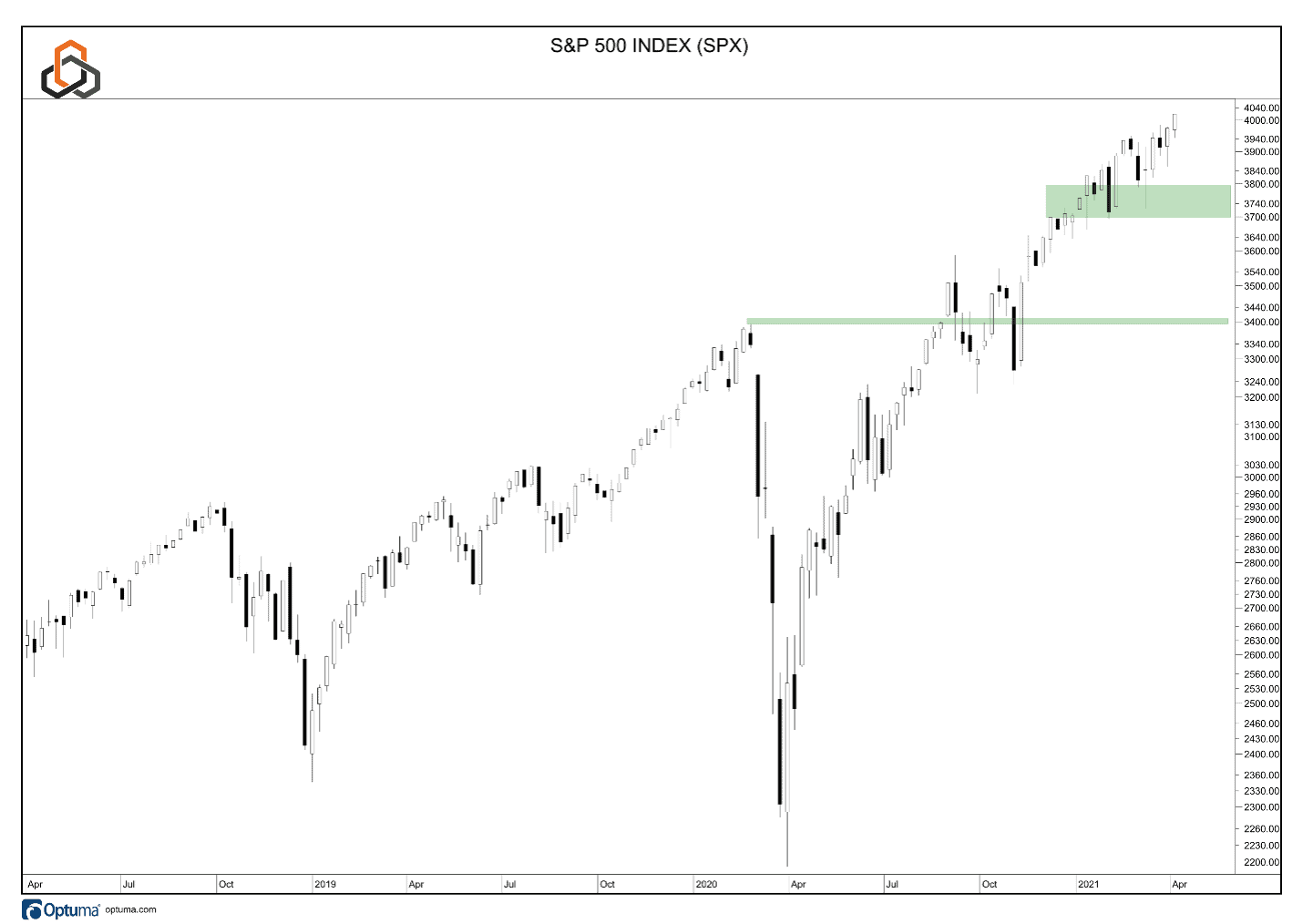 The S&P Small Cap 600 Index traded higher on the week but failed to make a new record high alongside the S&P 500. The index remains in a consolidation as it works off an overbought reading on the weekly RSI Indicator. On a relative basis (bottom panel), small caps have traded into resistance at the 2016 – 2018 consolidation, setting the stage for a period of digestion after the strong relative advance from the 2020 lows. 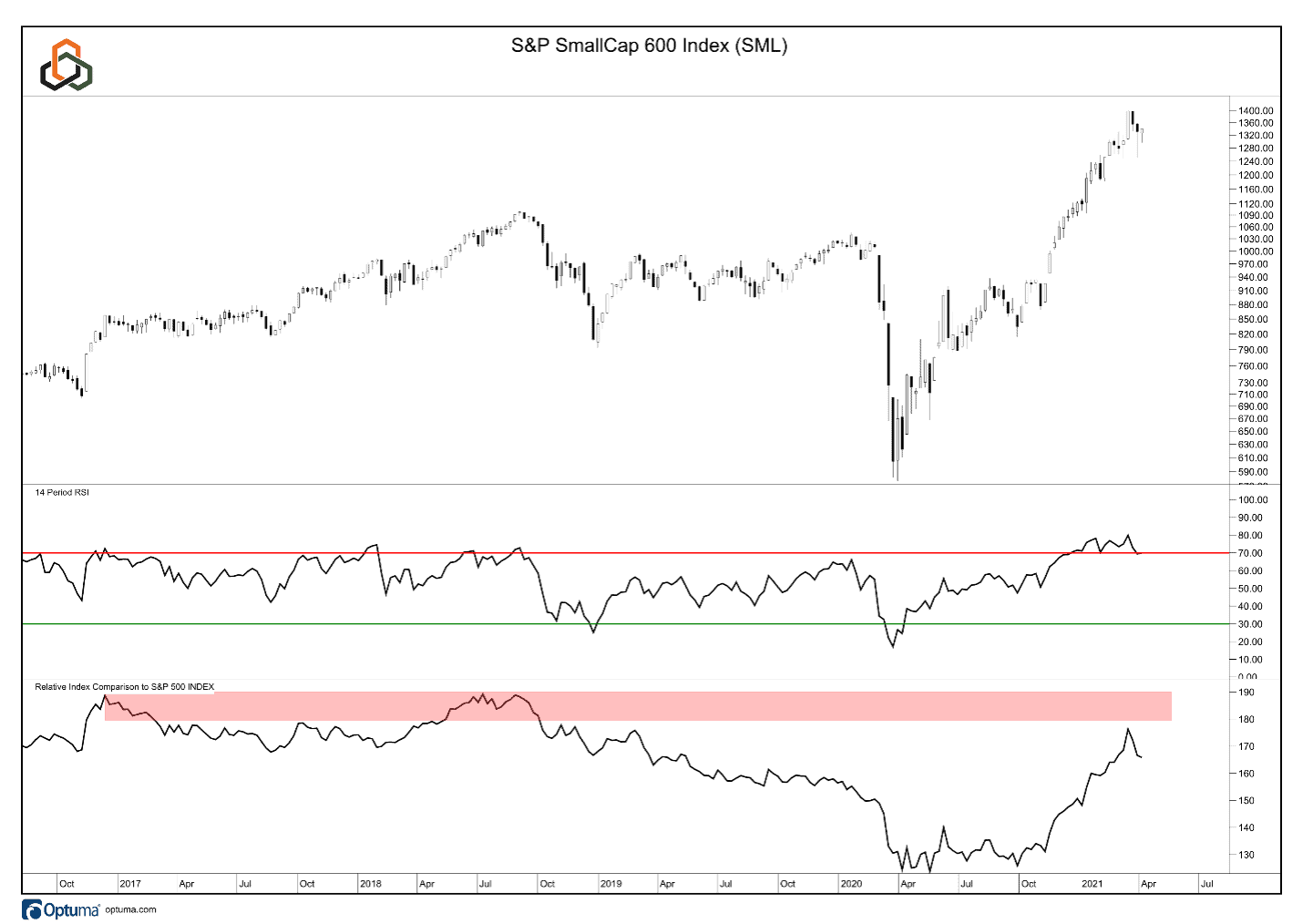 Drilling down on the sectors within the small cap space, Energy, Technology, Industrials, and Materials outperformed on the week. All but Technology is part of the cyclical reflation theme that has been in place for more than six months. Like the index itself, these four groups did not trade to new highs last week and are consolidating gains. Thus far, none are showing signs of having sustained any major technical damage during their consolidations. 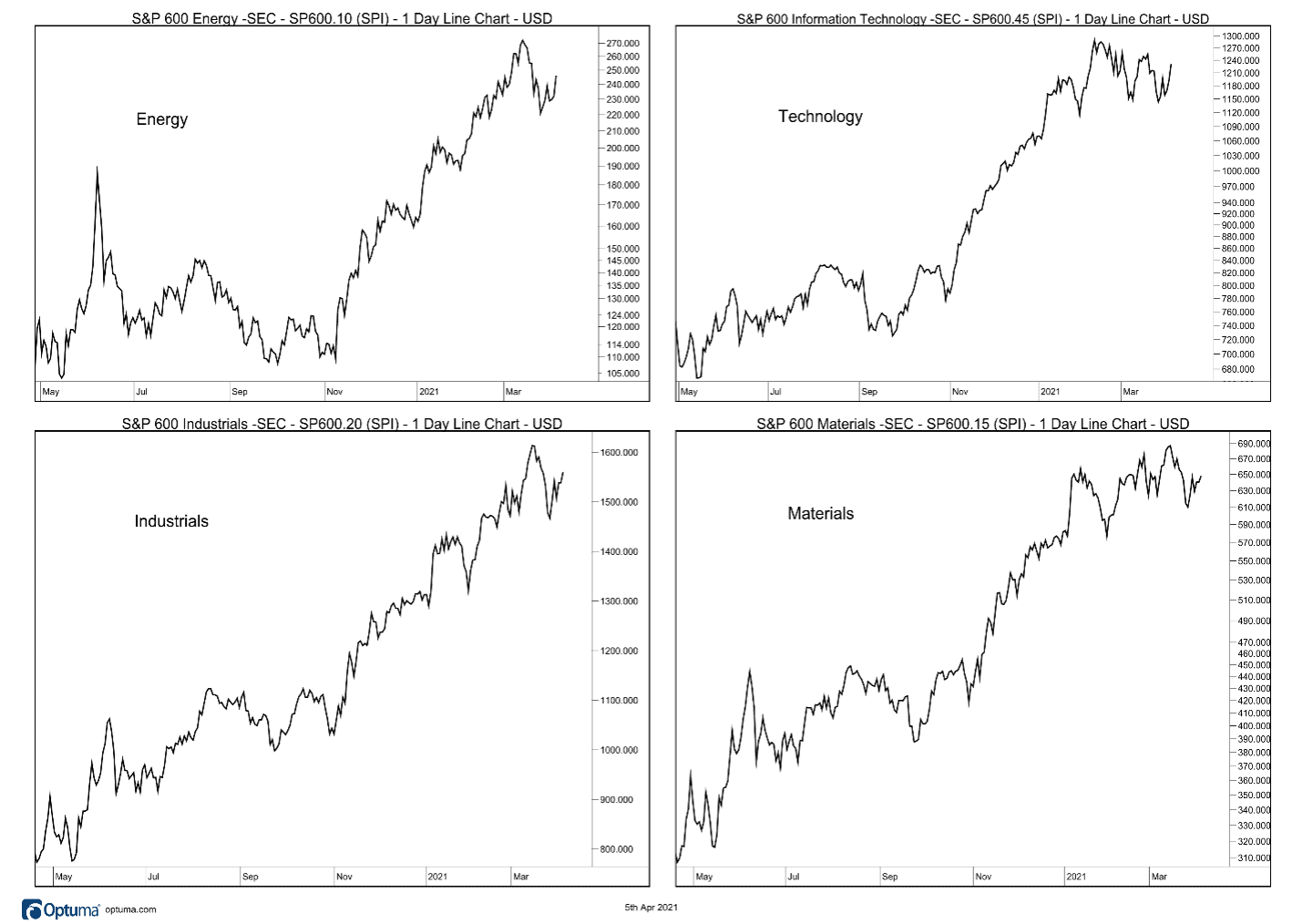 The Nasdaq Composite Index is the market that is on the radar of most investors as the growth theme has been under pressure since the middle of February. The Nasdaq turned in a strong week and has thus far held important support in the zone between 12,000 and 12,400 to keep the uptrend from the March 2020 lows in place. Throughout the consolidation, the weekly RSI (middle panel) has remained above 50, indicating that the momentum remains to the upside. The question that needs to be answered soon is “will the Nasdaq resume its leadership role?” On a relative basis (bottom panel), the index is holding support vs the S&P 500 and the next few weeks will go a long way in determining if this former leader will move to the front of the pack or continue to fade. 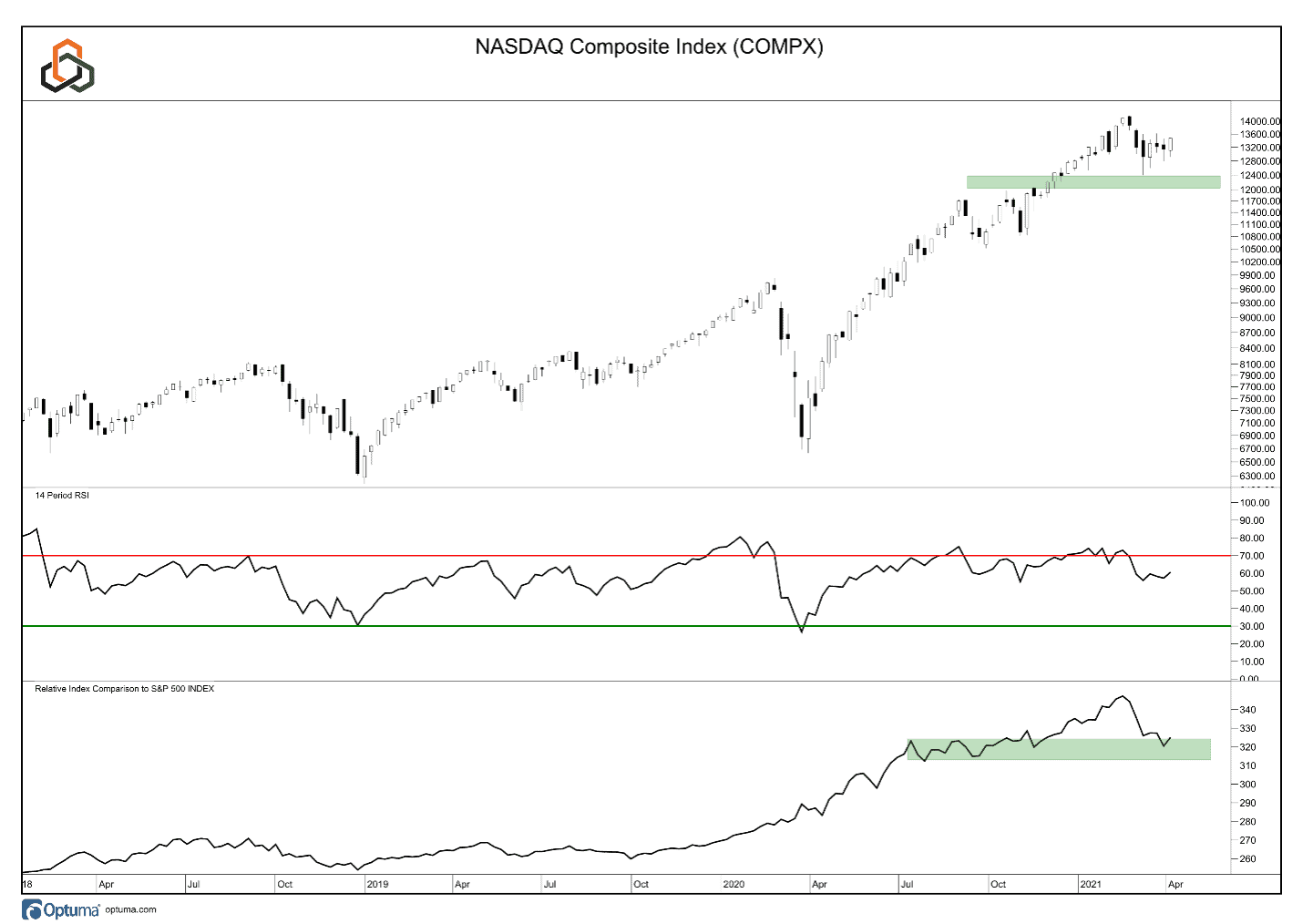 The PHLX Semiconductor Index was a standout on the positive side last week, adding more than 9% to close at a record weekly high. The group has been in a consolidation since the middle of February after becoming overbought based on the weekly RSI (middle panel). On a relative basis (bottom), semiconductors remain below the recent highs but have begun to move to the upside once again. 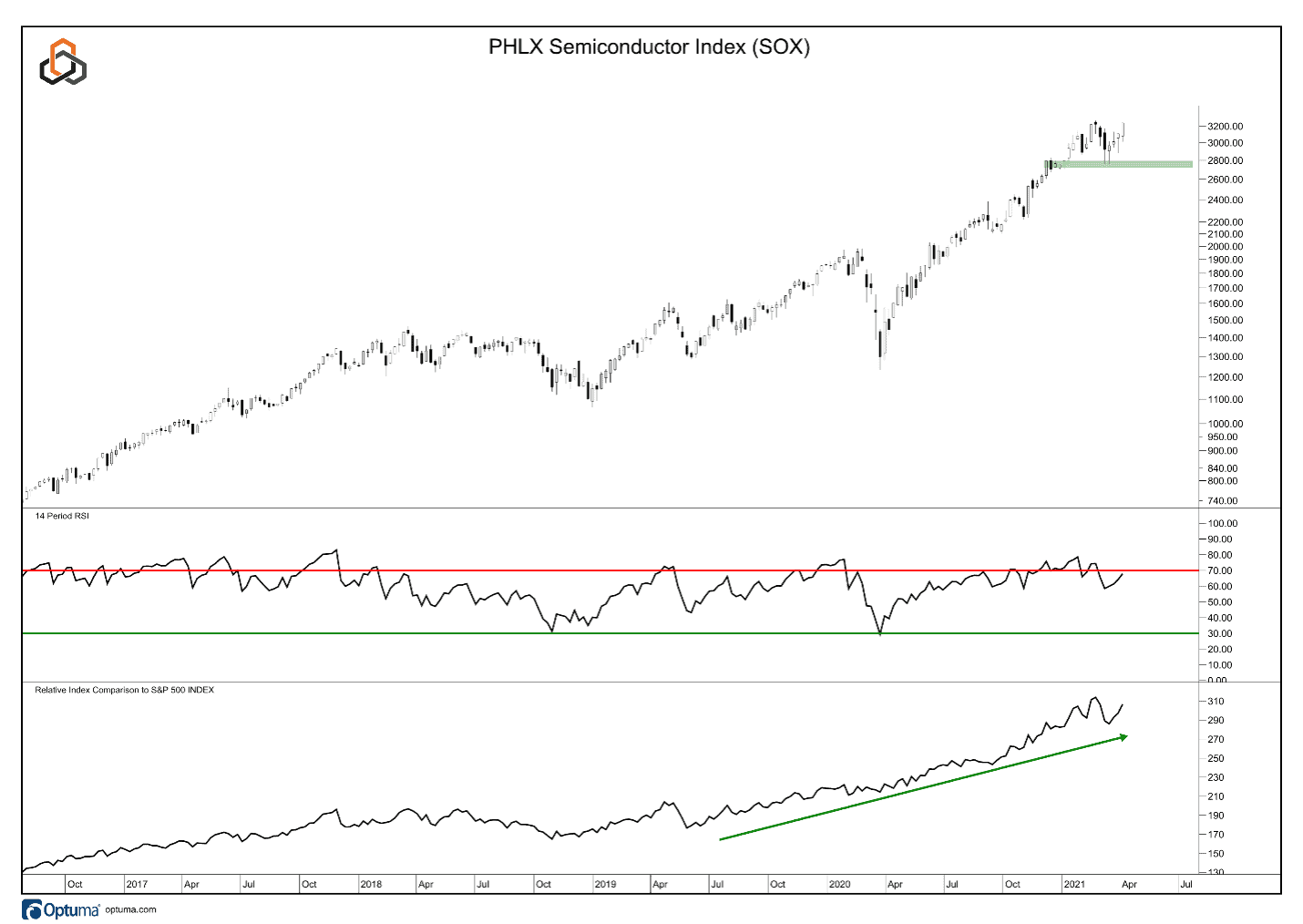 How these consolidations resolve will be an important data point in determining if the strength that was seen in the Nasdaq last week will persist. Leadership on the part of the semis would argue for a reassertion of outperformance from the Nasdaq and add to a generally bullish tone for equities in general.

The 10-year yield in the U.S. is also a key metric on the radar screens of investors across asset classes. After an aggressive move to the downside during the depths of the COVID pandemic, yields have been pushing higher since last summer as prospects for economic growth have improved and aggressive policies have been adopted regarding both fiscal and monetary stimulus. The yield has now moved into a large area of resistance that extends to the downtrend line from the 1981 highs near 2.8%. 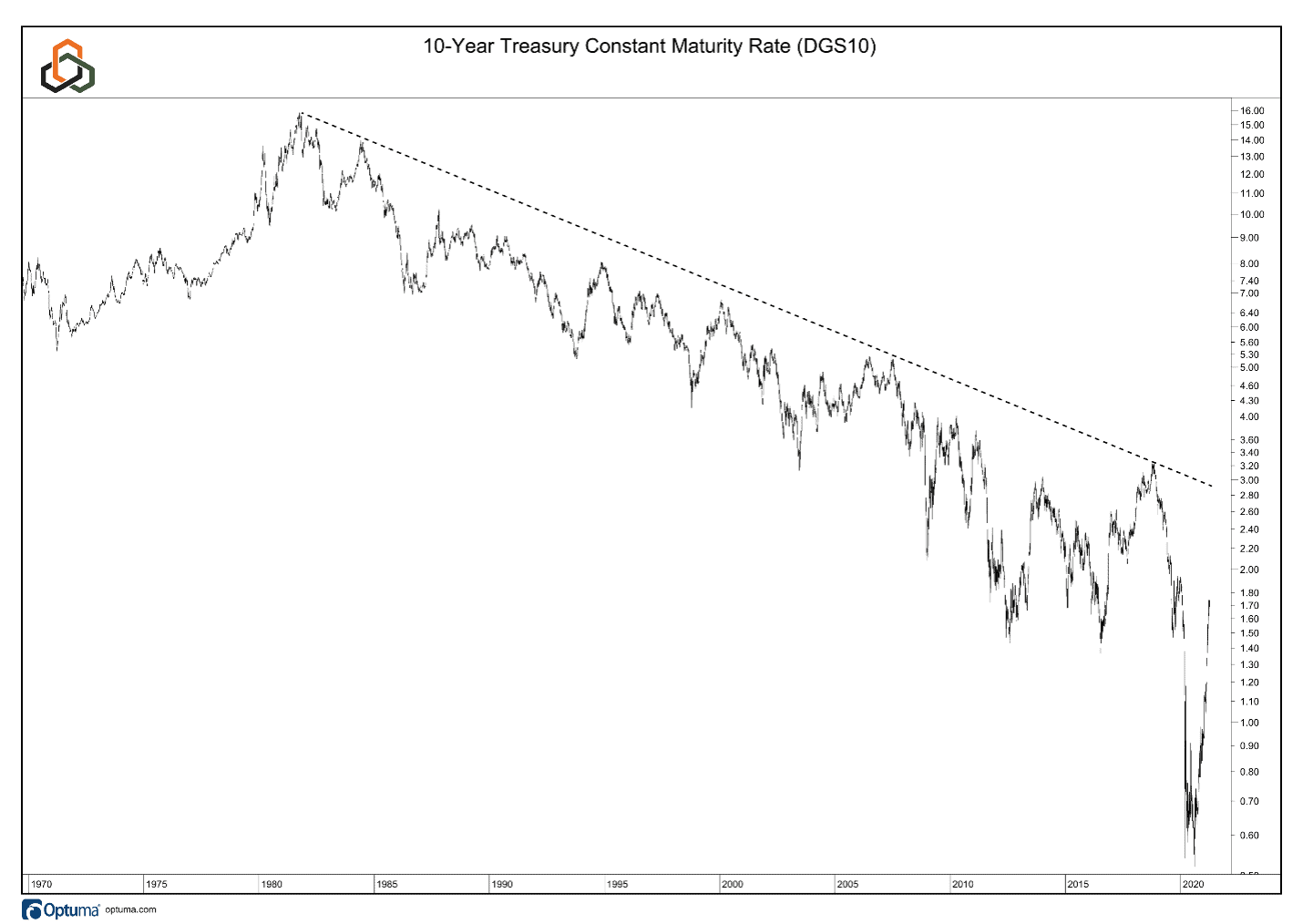 While much has been made of the recent rise in the interest rates and the impact that it has had on certain parts of the equity market, this long-term look puts the move into perspective. The move higher is playing out within in the context of a major secular decline in rates that has been in place for 40 years. A moderation in the pace of the advance would likely give the equity market time to adjust to the move higher in rates. In the case of rising rates, the speed of the advance is more important for risk assets than the absolute level of the 10-year yield.

Perhaps the past year has simply been an extreme move due to an exogenous shock and then a return to the prevailing secular trend? Should rates move lower from current levels, the odds would favor a stalling in the uptrend for reflation assets.

One theme that has caught our attention of late has been the improving performance of stocks outside the U.S. The Dow Jones Global World Stock Index (Excluding U.S.) broke above resistance at the 2018 highs in January of this year and has moved into a consolidation above that breakout level. On a relative basis (vs the S&P 500, middle panel) global stocks have been in a downtrend for the better part of the past decade. During this time, U.S. investors with a strong home-country bias have been rewarded. More recently, that relative downtrend has been undergoing a shift and over the past 52 weeks, global stocks have been outpacing their U.S. peers (positive slope in the lower panel). We have seen bouts of outperformance on the part of global equities in the past 10 years, but they have been short-lived. Will this time be different? 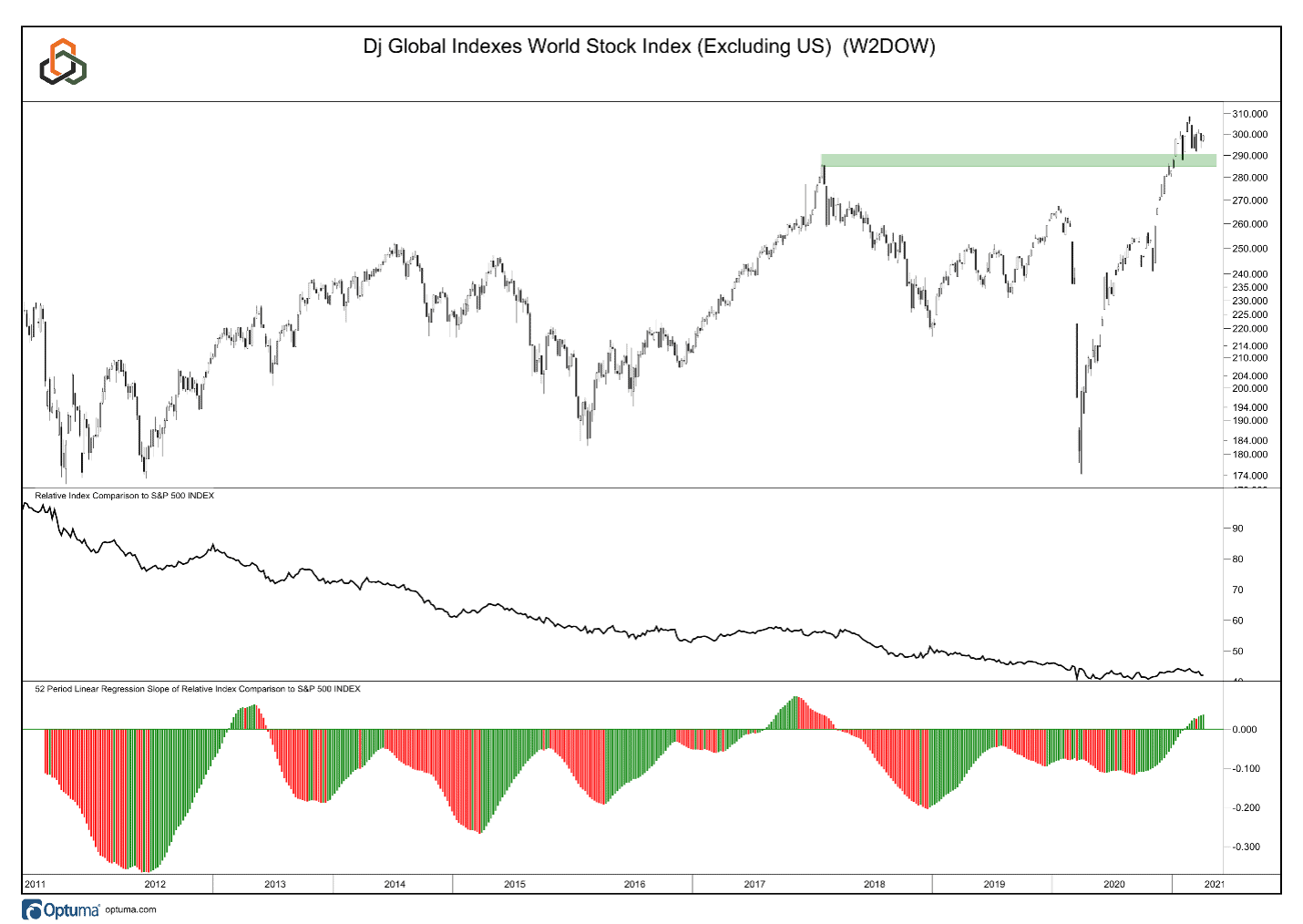 The Bloomberg Commodity Index has made a strong move to the upside since the pandemic lows but, as an asset class, commodities have been in a persistent downtrend since 2011. The year-old rally has run into resistance near the 90 level that dates to 2016. On a relative basis (vs the S&P 500) commodities have been a place to avoid for much of the past decade. However, like global equities, there are signs that a shift is underway in this relationship. The 52-week regression slope of relative strength turned positive last week for the first time since 2016. A continuation of outperformance on the part of commodities would be a major shift for the markets. 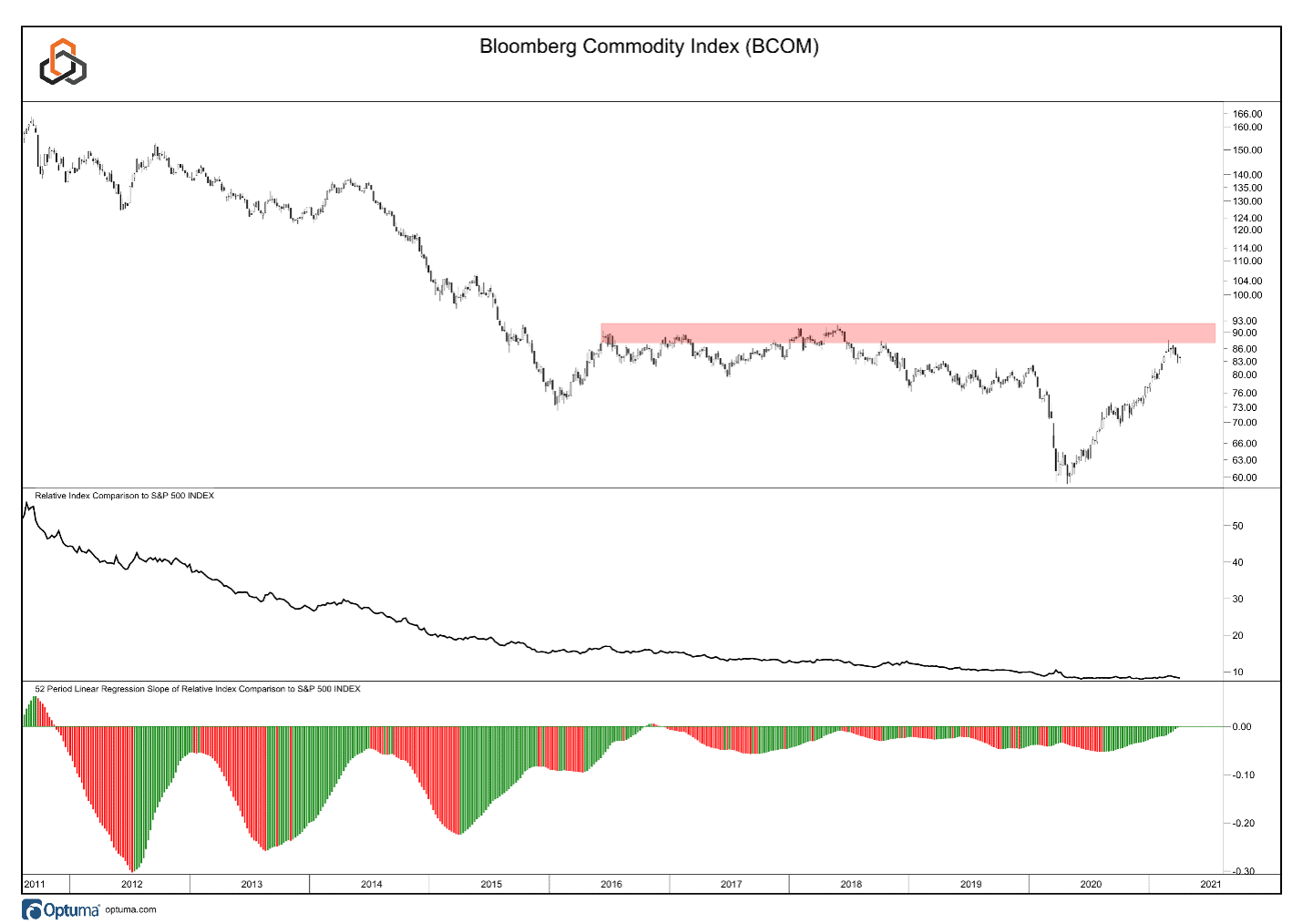 Within the commodity complex, Agriculture has been a leader but is nearing resistance at the 2014 highs. Base Metals have been strong and are holding above the highs from 2012. Precious Metals have come under near-term pressure as investors have been more focused on risk-taking rather than being conservative. Energy products have made a strong move from the March 2020 lows but are now trading into resistance. 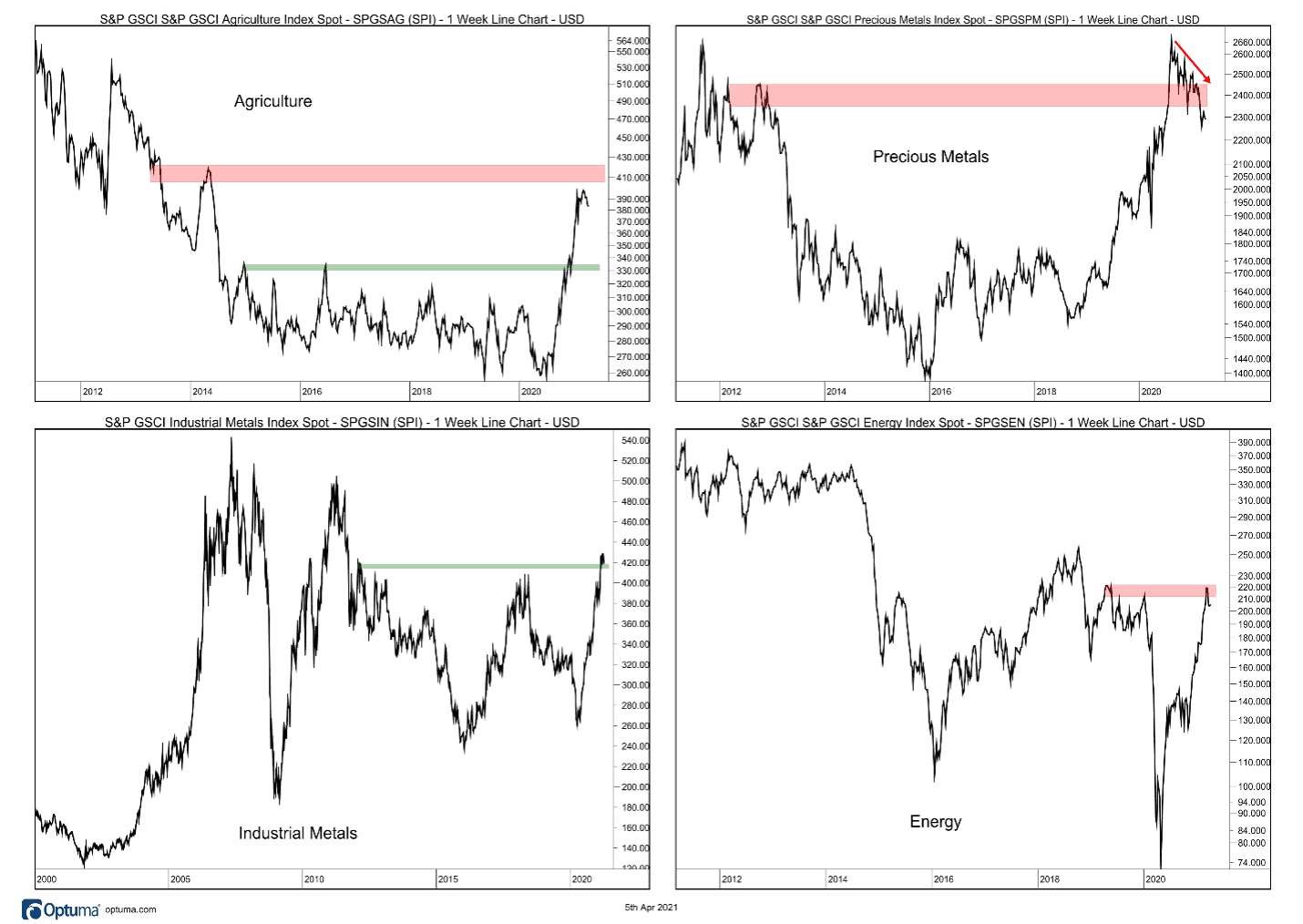 The U.S. dollar entered 2021 as arguably one of the most consensus shorts of any asset class. Perhaps only U.S. treasuries were remotely close to being so universally hated. The market, in sticking with its mandate of making the greatest number of people look like fools at any given time, has seen to it that the greenback go on a steady grind to the upside as it has throughout the first quarter of the new year. It is interesting to note that at the late 2020 price lows, the RSI did not become oversold, a clue that downside momentum may be waning. A break of the 95 level for DXY would likely lead to further dollar strength.

Why does this matter? In the height of the pandemic panic, the dollar was a safe haven asset, moving higher as investors fled risk. Since then, there has been a strong inverse correlation between the dollar and risk assets. Continued strength from the dollar here, could act as a headwind to many of the leading themes across asset classes. This would likely be the event that surprises most investors.

Equities remain in an uptrend from the March 2020 lows. The biggest theme in the weeks ahead will be the relative performance of small caps and the Nasdaq. The former is a recent leader that is nearing relative resistance, while the latter has come under near-term pressure but is holding support. The recent shifts in the relative performance of global equities and commodities may hold important implications from an asset allocation perspective should they persist.