The Truth About the
Killer Yield Curve

Where do you get your financial news? CNBC? Yahoo Finance? Fox News?

Unfortunately, I can’t recommend any of these sources to investors looking for balanced reporting. They rely on hyperbole and hysteria whenever markets take even a slight dip.

I’m not saying they’re fake news, but overall, the investing public is worse off because off the financial media.

There are very few media outlets that truly attempt to educate the public. For most, it’s a game of clickbait where ad dollars follow the most trafficked sites. Charlie Munger once said, “Show me the incentive and I will show you the outcome.”

And of course, as entities that live on advertising dollars and subscriptions, media outlets need to drive clicks and eyes to their websites. To get someone to click on a link to an article or website, the article needs to be grandiose!

In May 2019 a version of the Yield Curve inverted and the headlines that followed were right on que:

With the news breaking the morning of August 14th that this “recession indicator” is back, let’s dig into exactly what an inverted yield curve means, the implications for market losses, and if you should start to batten down the hatches.

What Is an Inverted Yield Curve

If we wanted to get more technical, I could dive into the intricacies of the bond pricing and duration—but that’s beyond the scope of this article. Frankly, there are much smarter folks who devote their lives to fixed income who are better resources.

Simply put, any time you purchase a bond, the major question to answer is “How long do I want my money tied up?” The longer you let someone borrow your money, the higher interest rate you expect to be paid.

If you are willing to lend someone money for 10 years, it’s only logical that the interest rate should be higher than if you wanted to lend that person money for 3 months.

When this happens, which is most of the time, it is called a normal yield curve because the longer-dated bonds are paying more than the shorter-dated bonds.

Occasionally, the yield curve will invert and the interest rate on a shorter duration bond pays more than a longer duration bond. This can happen for several different reasons. Morningstar did a fantastic write up by simplifying this with CD’s. 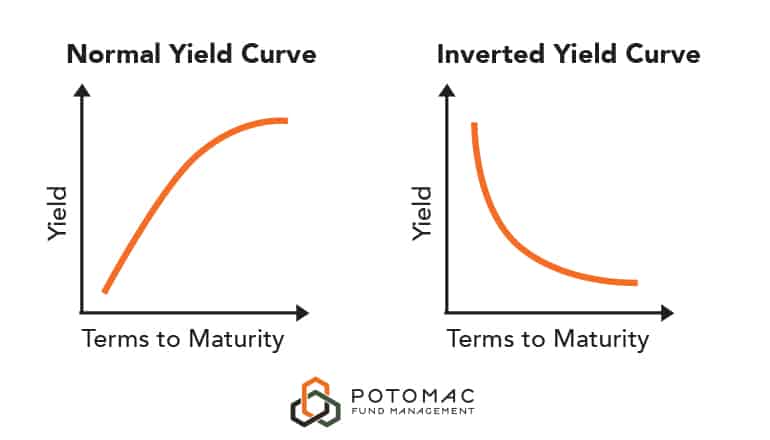 First, I had to decide on my definition of a yield curve inversion.

Believe it or not, definitions can vary between what constitutes short and long-term yields, in addition to what underlying data points to use. The further you want the data to go back the less options you will have.

I’ll save that rant for another day, but the data makes a huge difference.

Even if you decide to use the three-month treasury, using the constant maturity vs. secondary market rate, it would change the data dramatically.

I decided to use the following 2 points that allowed me to go back to 1962 with consistent and clean data:

In addition, I wanted to smooth out the data. For the purposes of this sample set if the yield curve inverts for a week and then normalizes I don’t consider that useful data.

So, to solve for this problem I went with a “sustained” yield curve inversion, i.e. the Federal Funds Rate must be above the 10 year Treasury yield for 40 consecutive trading days.

Conversely, I didn’t consider it a normalization unless the Federal Funds Rate was below the 10 year treasury yield for 40 consecutive trading days.

Why Does an Inverted Yield Curve Matter?

Many pundits say an inverted yield curve has proven to be the most accurate recession predictor. That’s debatable, based on how far out you consider the prediction to be valid? (12 months? 18 months? 3 years? Is it defined at all?)

However, for this blog our focus will be the relationship of an inverted yield curve to catastrophic market losses.

Our investment philosophy at Potomac is to reduce the pain that investors can experience from bear markets, which may or may not happen during a recession.

So, does the inverted yield curve always proceed a bear market? 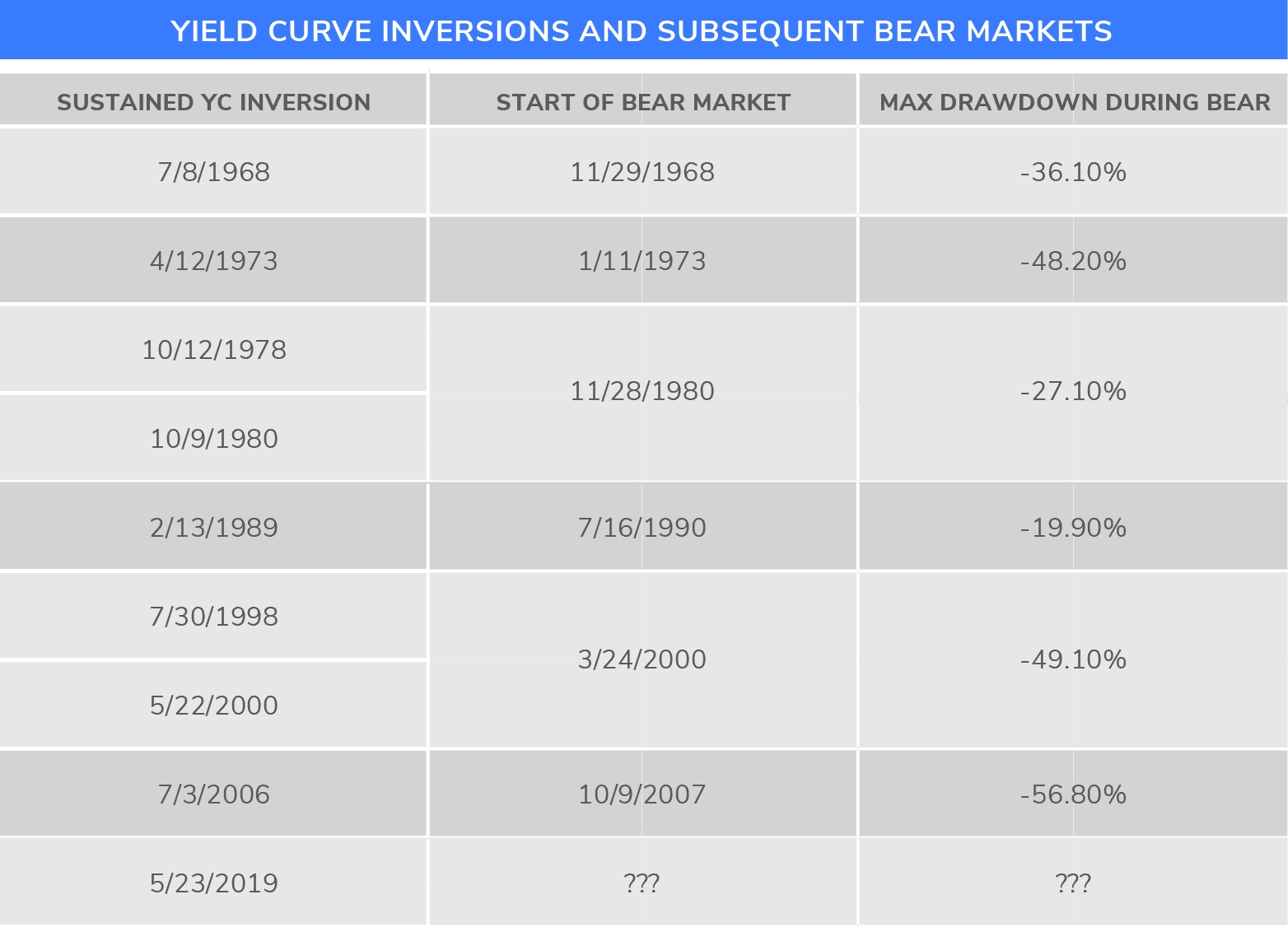 A lot of this analysis has the benefit of hindsight so it must be taken with a grain of salt. As you can see, though, an inverted yield curve does not necessarily proceed a bear market every time it occurs.

So, should investors should be worried about a yield curve inversion? In short, yes. It’s not healthy and bear markets typically follow them.

However, it’s impossible to trade in anticipation of an imminent downturn because the market could still run up for months or even years after the initial instance of an inversion.

So contrary to media headlines imminent doom isn’t around the corner. The inversion should be considered a critical warning sign rather than a guarantee.

Keeping a close eye on the behavior of the fixed income and rates is important since nearly every financial crisis has been a product of a debt-related fiasco.

Turning the Data into a Trading System

The first step in testing a concept is to turn it into a trading system. In other words, we set out to create an algorithm that will buy and sell the overall market based on a given set of rules.

Based on what we’ve covered so far, you can probably guess where I’m going with this. Let’s test how the yield curve inversion will work as a trading strategy!

Since our definition of a yield curve requires 40 straight days of being inverted, this is a forward-peeking system. And let’s be clear: This exercise is just for illustrative purposes and serves no purpose in real life.

We set the parameters to the following:

The data convincingly displays that there is some market risk associated with an inverted yield curve.

Since 1962, this strategy generated a negative annualized return with greater downside risk than just holding the S&P 500.

As with all our systems, we reverse the signals as a sanity check. In this case, that means we adjust to the following terms:

As expected, under this scenario, returns dramatically increase by selling during an inverted yield curve, thus confirming our thoughts that risk levels are elevated following yield curve inversions.

ONCE AGAIN THIS IS FOR ILLUSTRATIVE PURPOSES ONLY AND DOES NOT ACCOUNT FOR FEES, TRADING COSTS, ETC.

Looking out for Possible Bear Markets

Our job at Potomac is to reduce the risk associated with bear markets. All our trading systems are built using quant-based technical analysis systems which attempt to use data to quantify risk so we can learn how it can best be avoided.

By looking at prior data sets, it’s clear that there is a correlation between an inverted yield curve and stock market losses. The part that is unclear is the timing of these losses.

A sustained yield curve carries demonstrable risk and must be taken seriously by those who want to “conquer their investment risk.”

Do you know how much your current investment portfolio exposes you to bear market losses?