Where Can Investors
Hide? 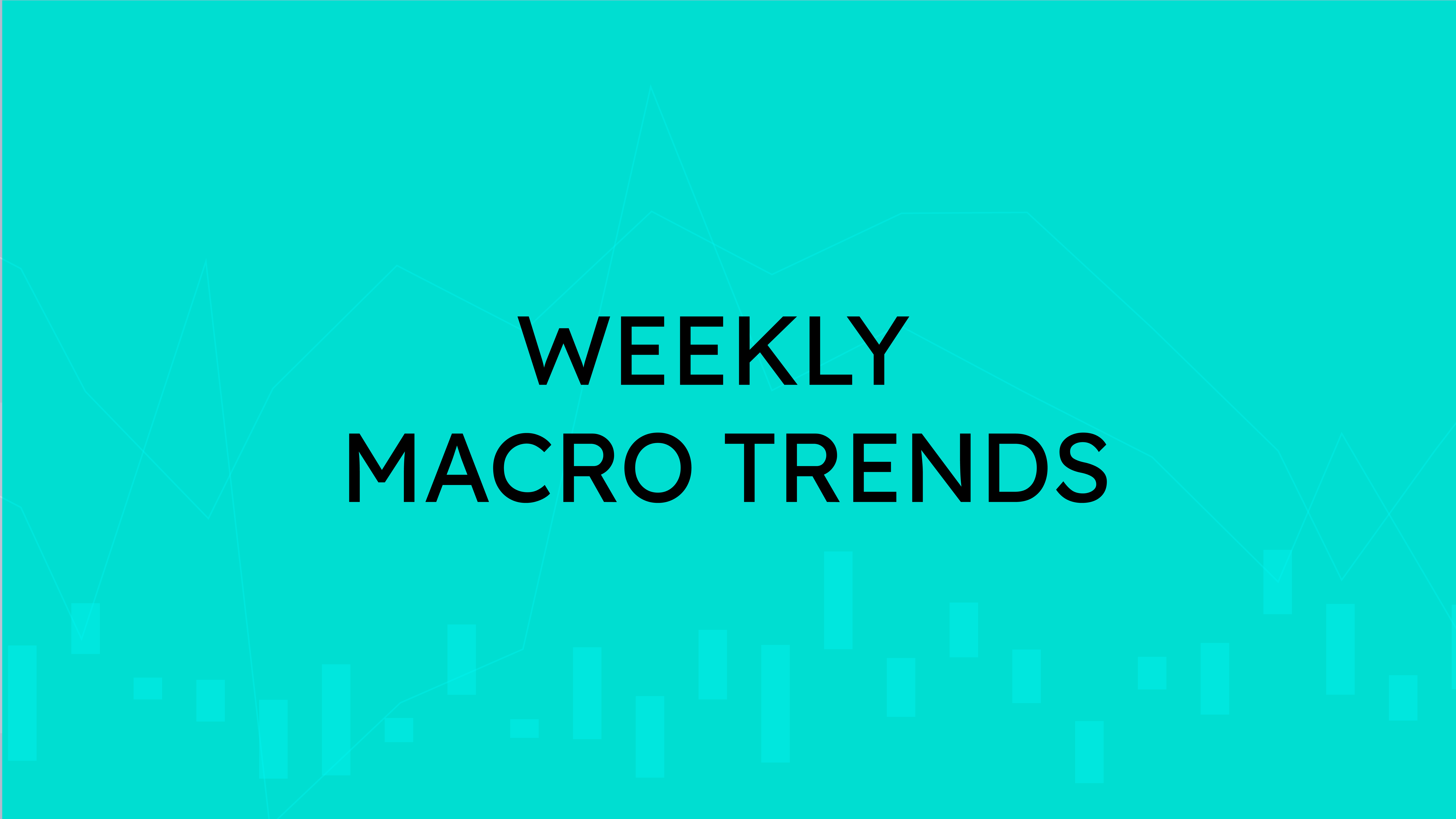 As the new week begins, we note once again that nothing is immune in a bear maker. Risk assets remain under pressure as investors await the CPI report this week that will likely have implications across asset markets. At the same time, yield curves are inverting as the Federal Reserve maintains a course of tightening into an economic slowdown. Dollar strength points to the risk-off nature of markets.

ACCESS our full advisor toolkit for a deeper look at the markets including our MONTHLY call, CHART BOOK, small cap ideas, and more. 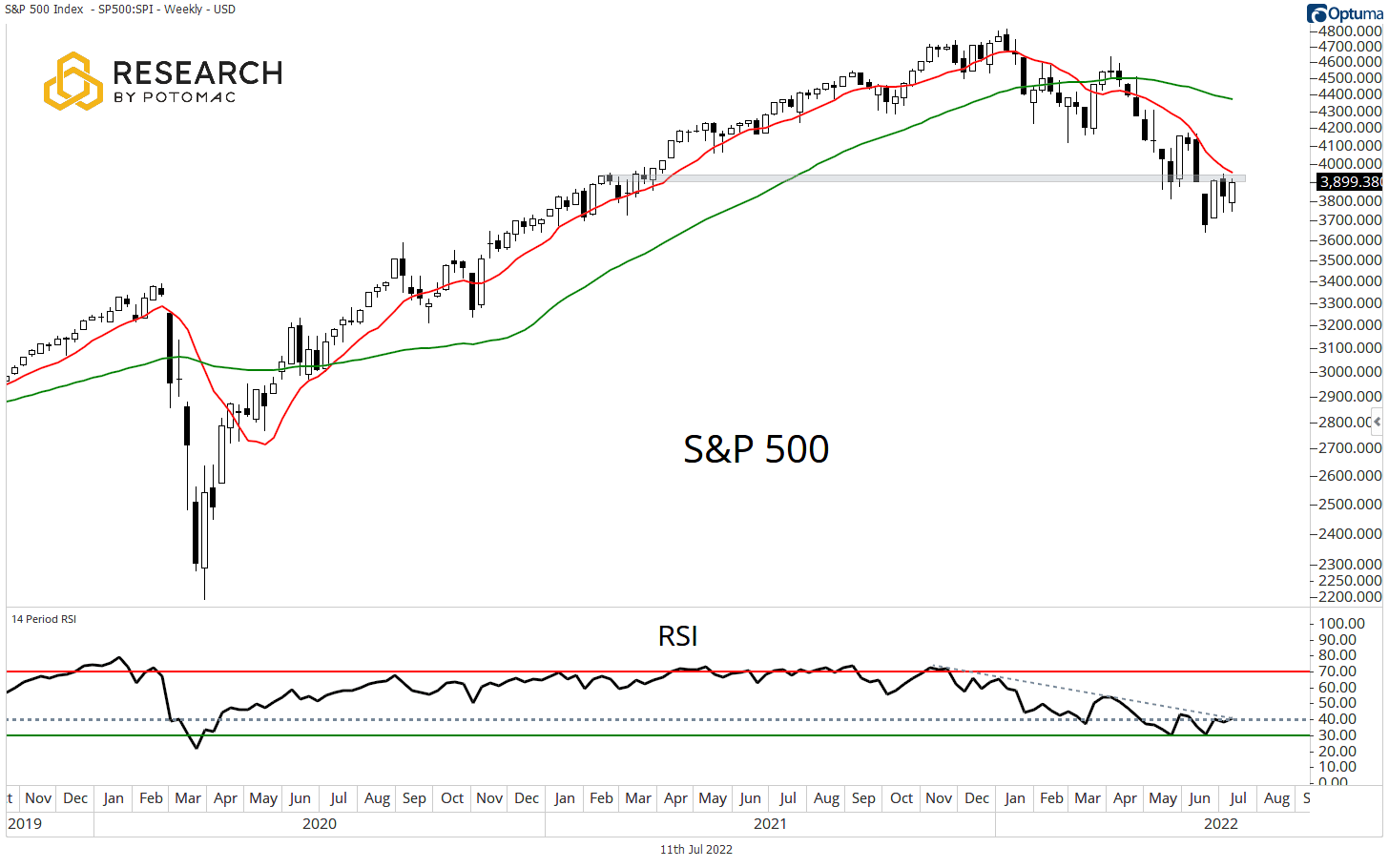 The S&P Small Cap 600 Index remains below resistance defined by the lower bound of the 2021 consolidation zone. The index is below the declining 10 and 40-week moving averages, and the 14-week RSI is holding in a bearish regime.

After showing much promise, the relative trend has begun to stall below the key resistance points at the October/November highs. The group has gone from being “less bad’ than the S&P 500 to perform in line with the major U.S. average. 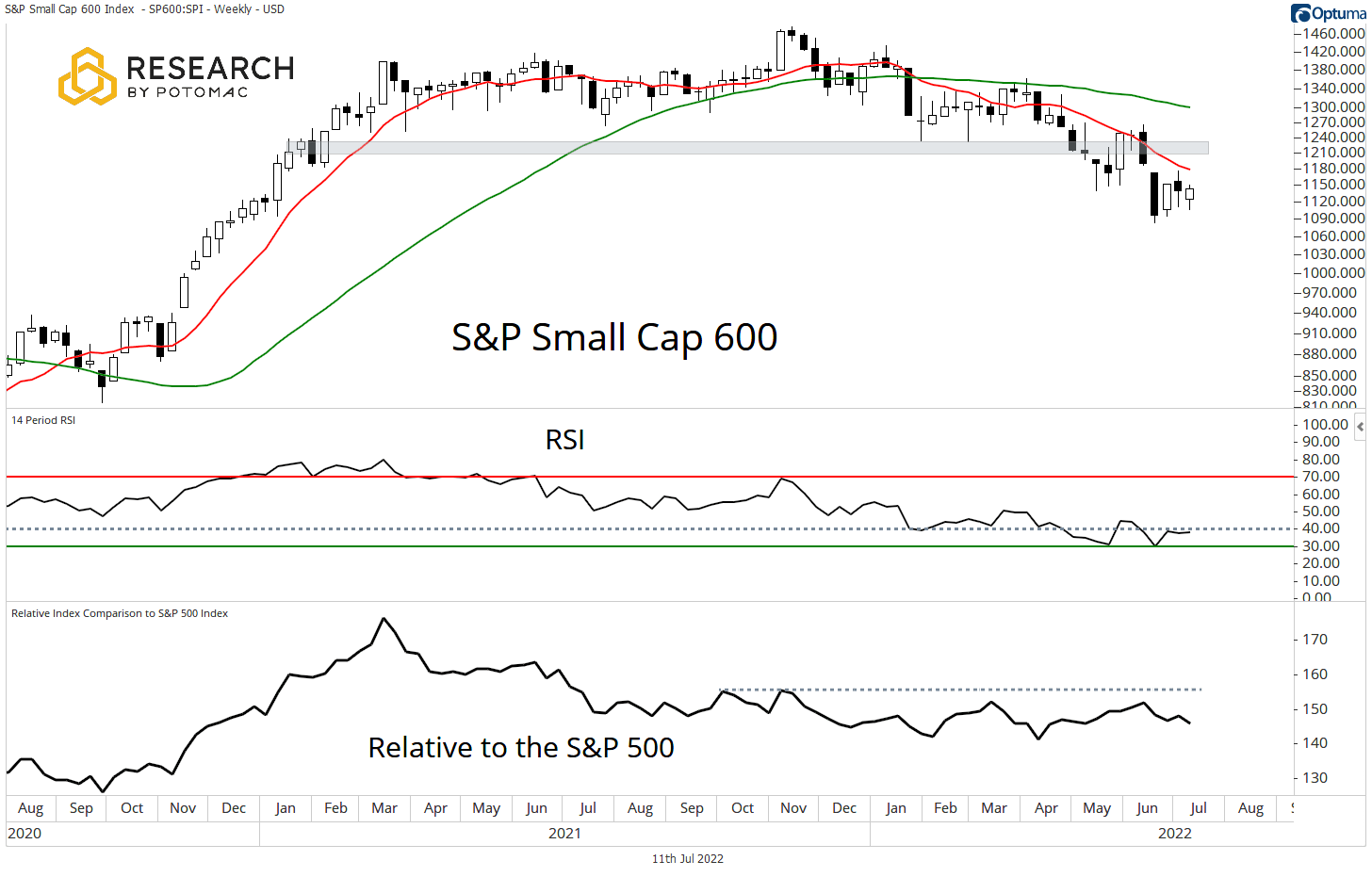 The relative trend remains bearish as the ratio trades below broken support; however, there are some early signs of stabilization that have caught our attention. 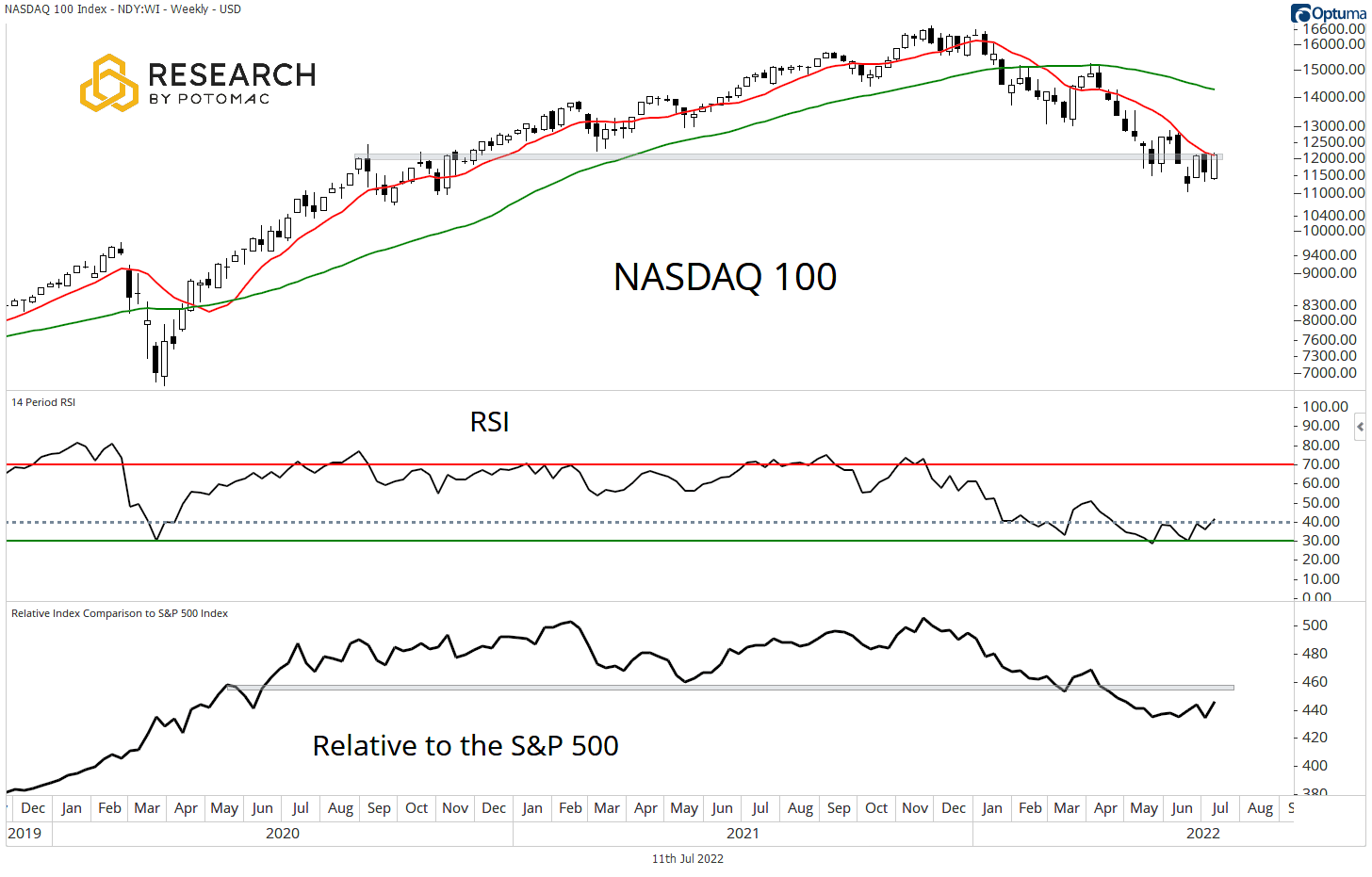 The yield is wrestling with resistance near 3.20%. This is arguably one of the most important charts in the market, and it will be in focus as the CPI report will be a key catalyst this week. 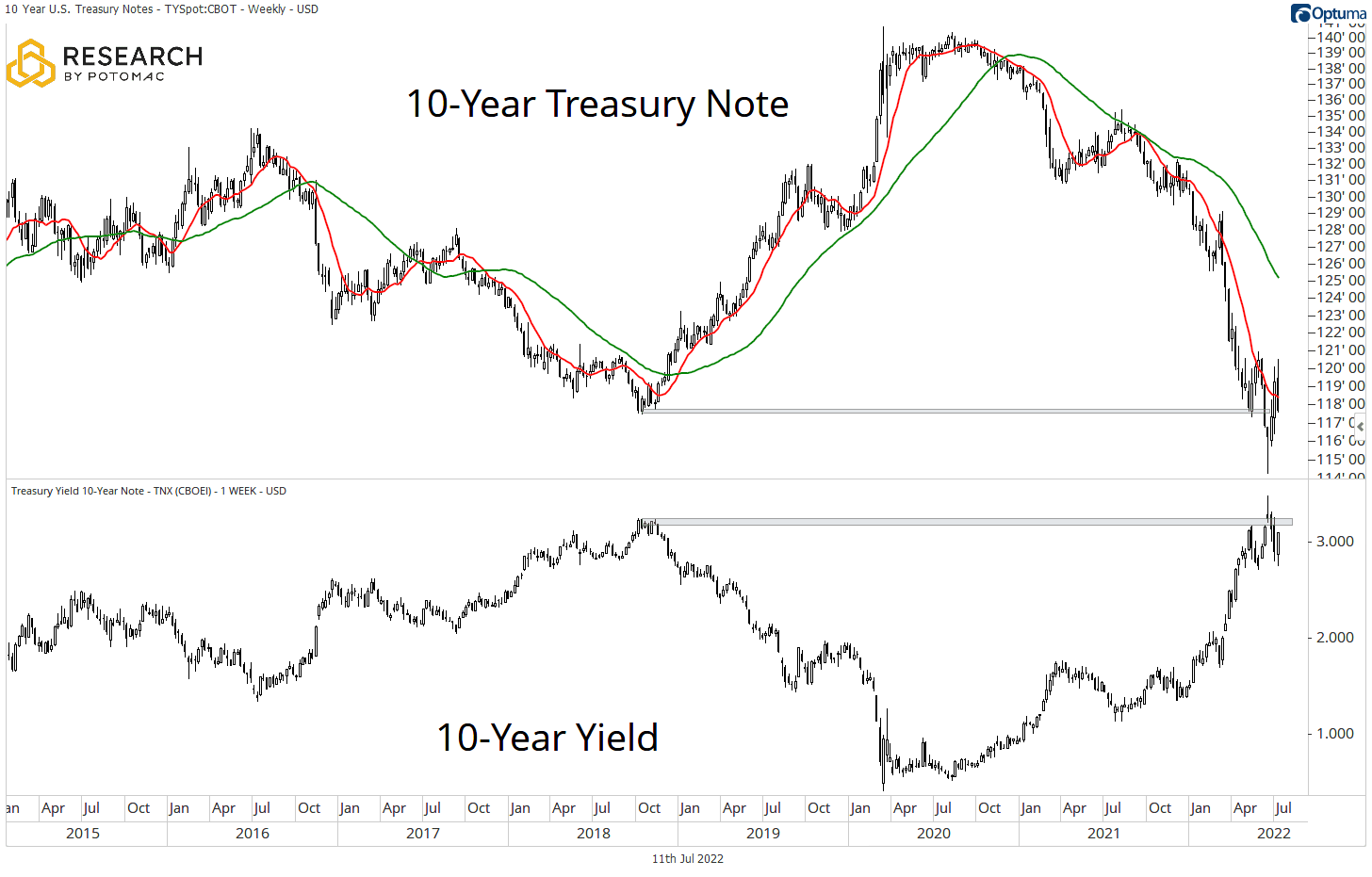 Across the curve, the trend in rates is still to the upside, with all moving higher again last week. 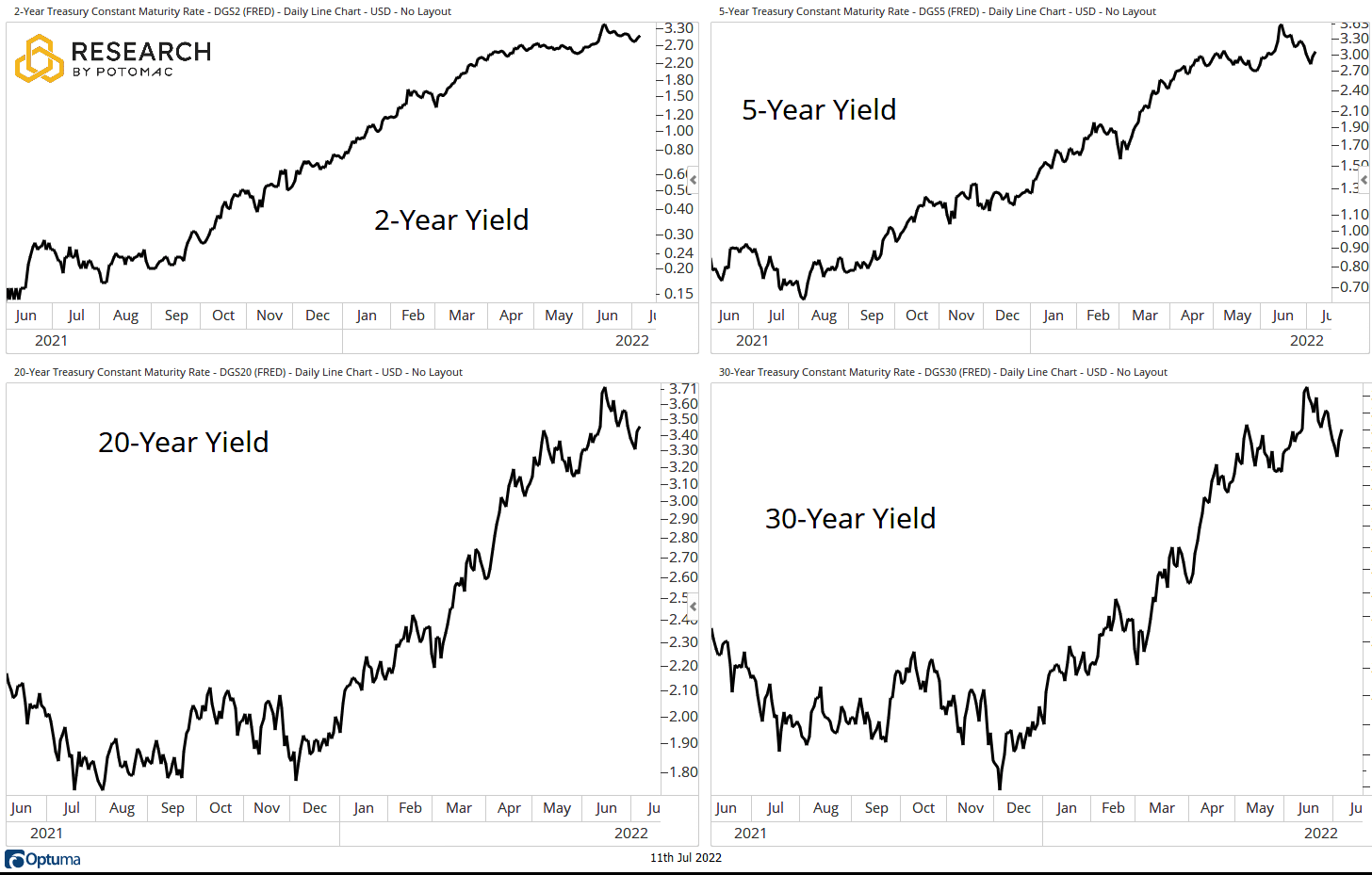 Perhaps more importantly, the trend is one of curve flattening to the point of inversions. 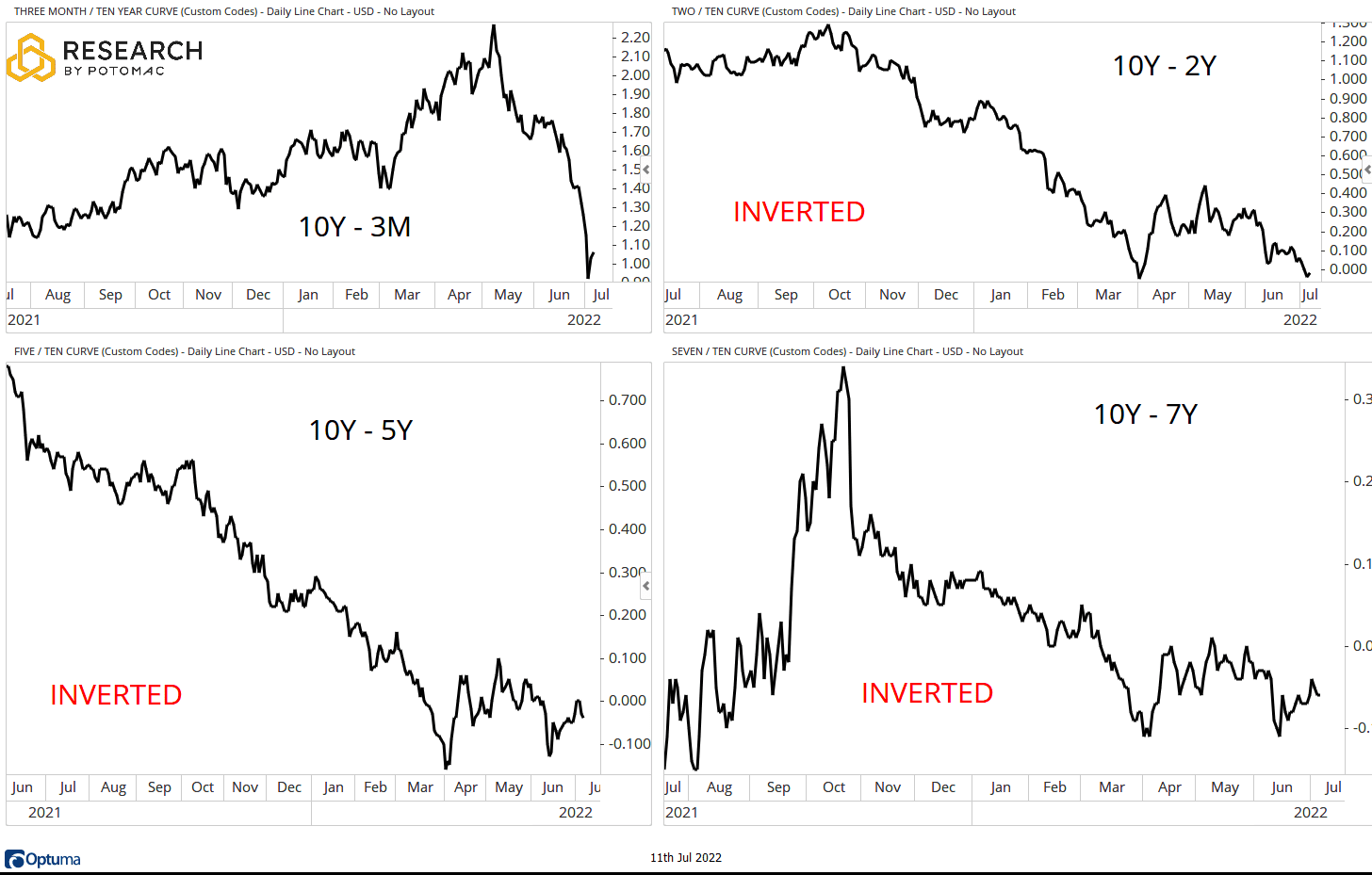 The Global Dow is below the key 3,600 level and the declining 10 and 40-week moving averages. This bearish price structure is confirmed by momentum as the 14-week RSI trades near oversold levels.

The relative trend remains below resistance, failing to break out over the past few weeks. 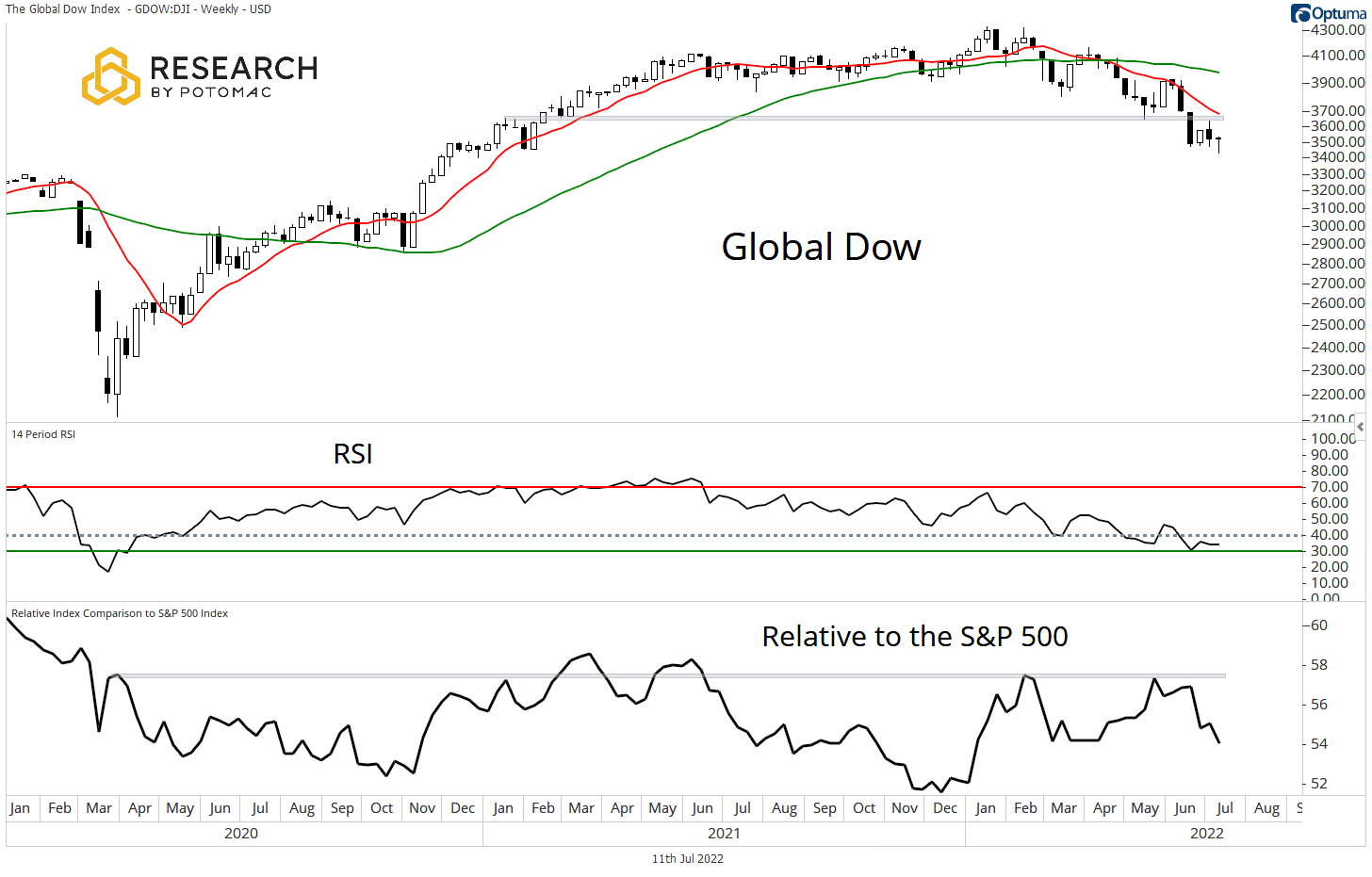 The Bloomberg Commodity Index has sustained short-term damage that will likely serve to shake out the weak hands and those who were late to recognize the bullish trend. Price is below the 10-week moving average, which is now moving lower. However, last week saw the rising 40-week moving average act as support. The longer-term trend is still in favor of the bulls if price is above 105.

The 14-week RSI is holding in a bullish regime, testing the 40-level as the new week begins. 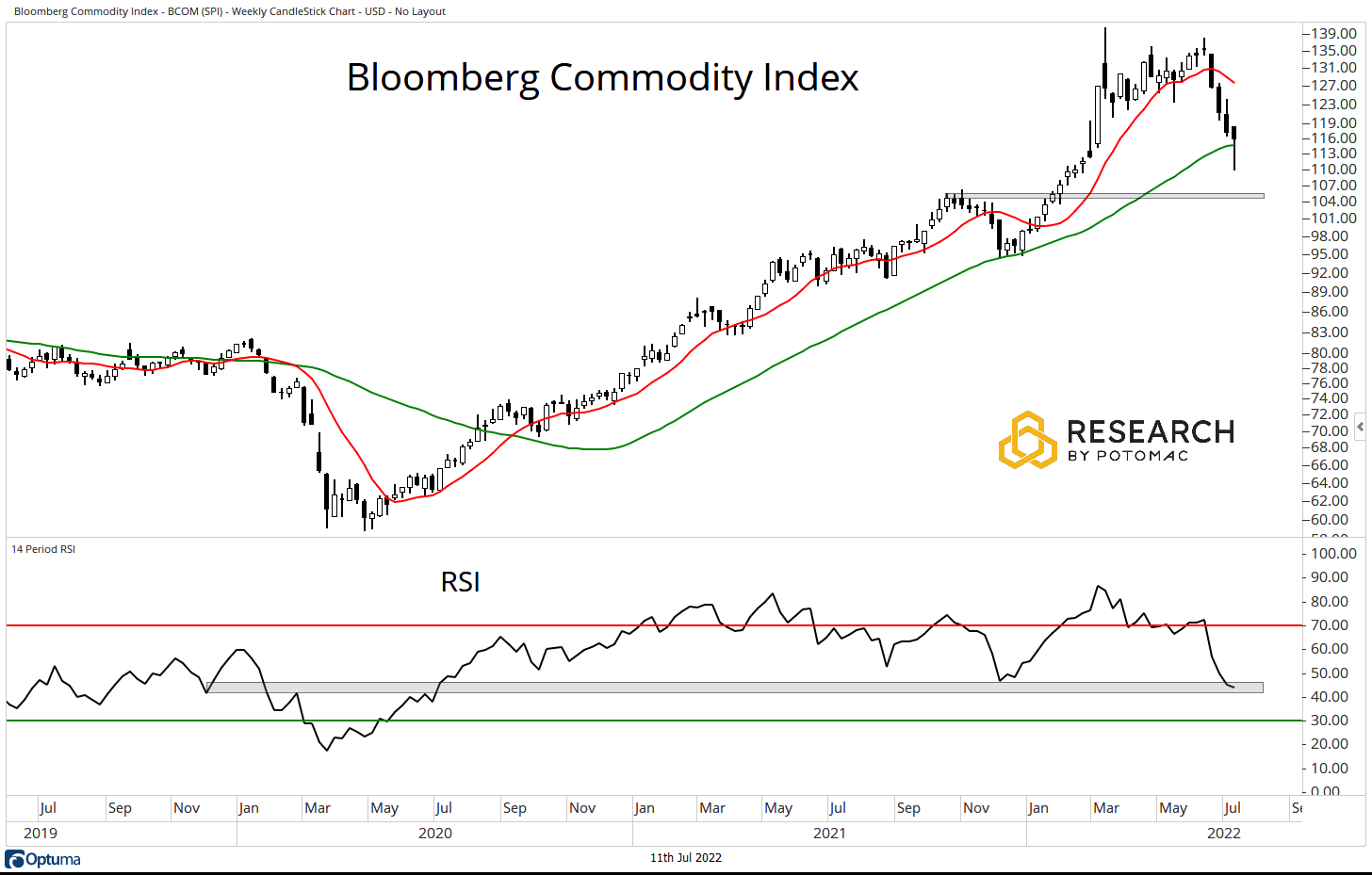 Drilling down at the different pockets of the commodity market, we can see that the longer-term trend in Energy remains bullish. The Metals are clearly broken, and Agriculture has reached a key inflection point that the bulls must defend. 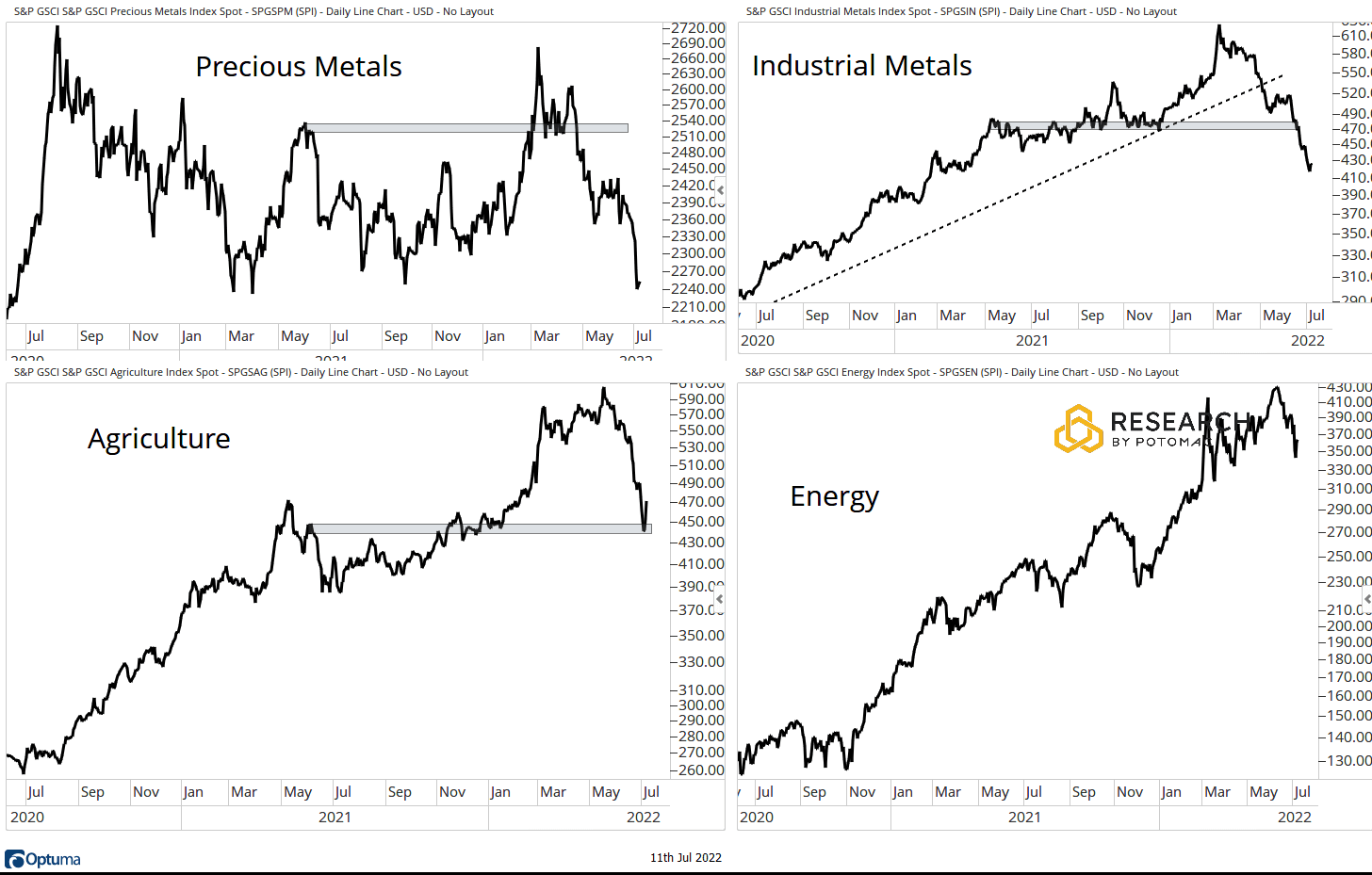 The U.S. Dollar Index has continued to trade above the breakout zone at the $103 level. RSI remains in an uptrend, defined by a series of higher highs and higher lows. Until these levels are broken to the downside, the bias remains with the bulls for the greenback. Continued strength here will likely keep pressure on the metals in the commodity space as well as pockets of global equities. 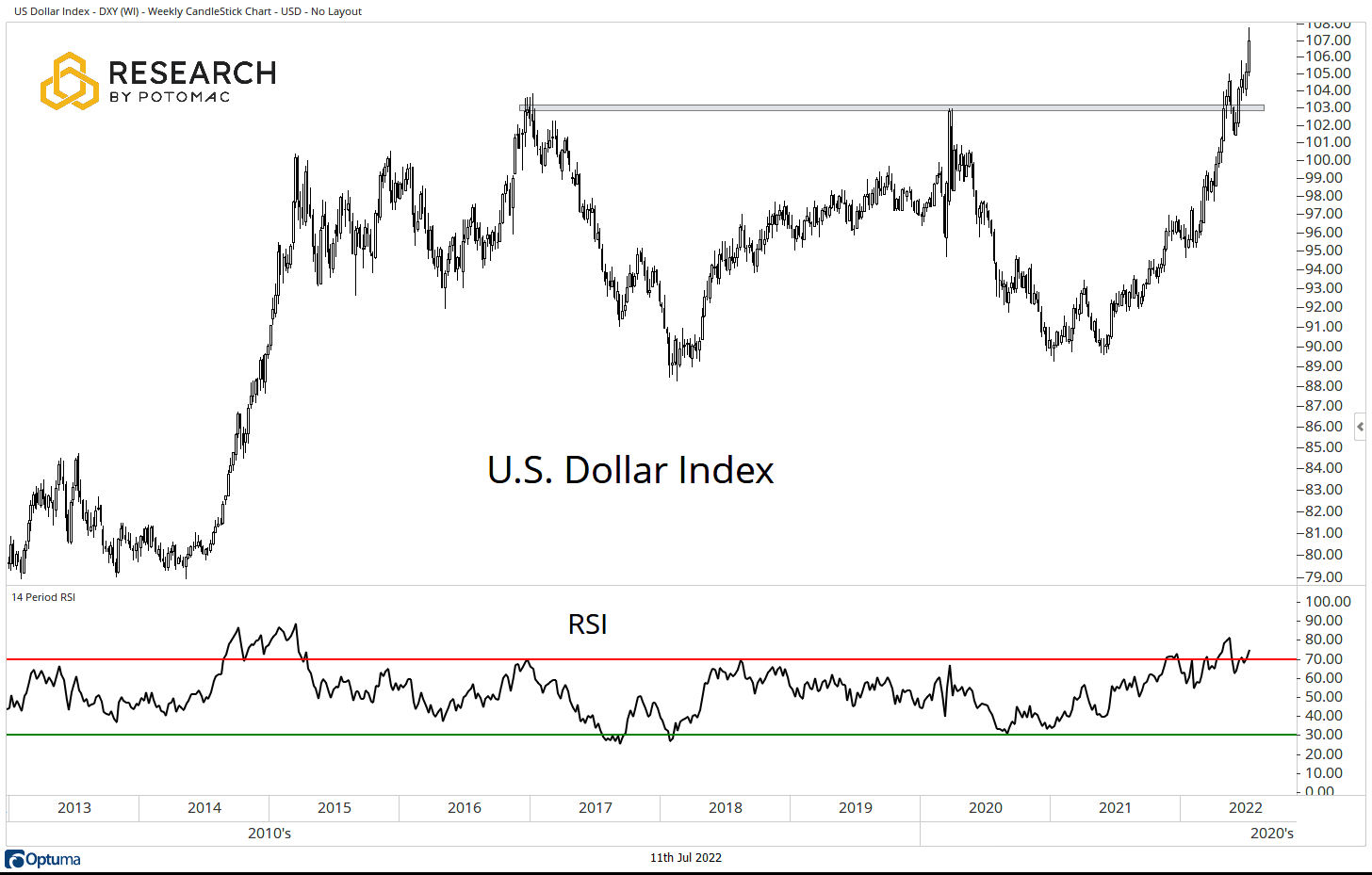 ACCESS our full advisor toolkit for a deeper look at the markets including our MONTHLY call, CHART BOOK, small cap ideas, and more.