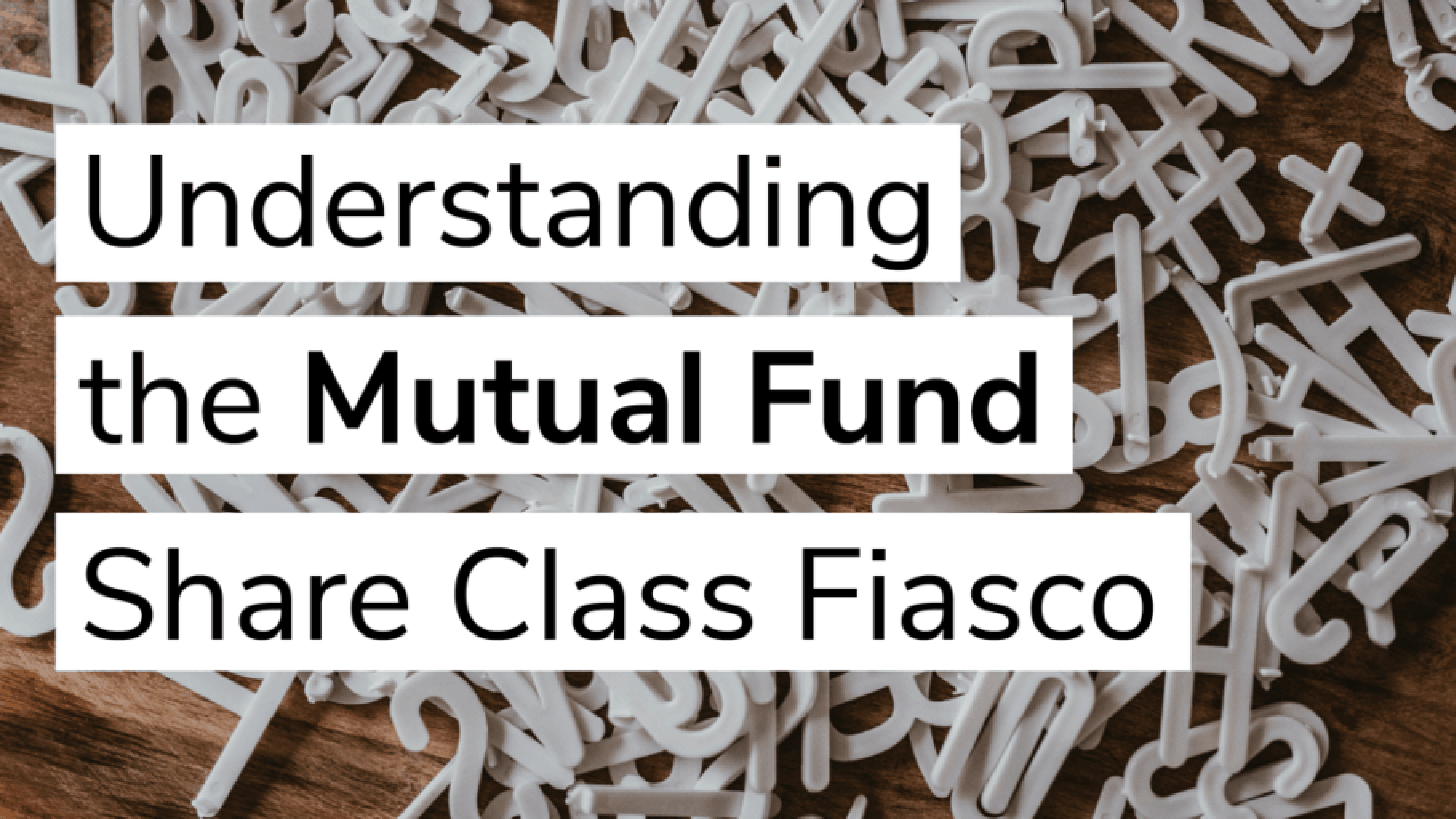 What should have been simple has become complex. Let’s call it what it is:  a “Fiasco”!

Mutual fund companies routinely issue different versions of the same fund. These ‘versions’ are called share classes. Each share class serves a purpose by appealing to different subsets of the market from institutional to retirement plans. This is primarily for purposes of altering levels of compensation for advisors, custodians, etc.

This entire mutual fund landscape became a fiasco because fund companies were given the latitude of choice without any guardrails. So, in addition to the standard share classes we are all used to like A, C, and Institutional, the fund companies went bonkers and did this: 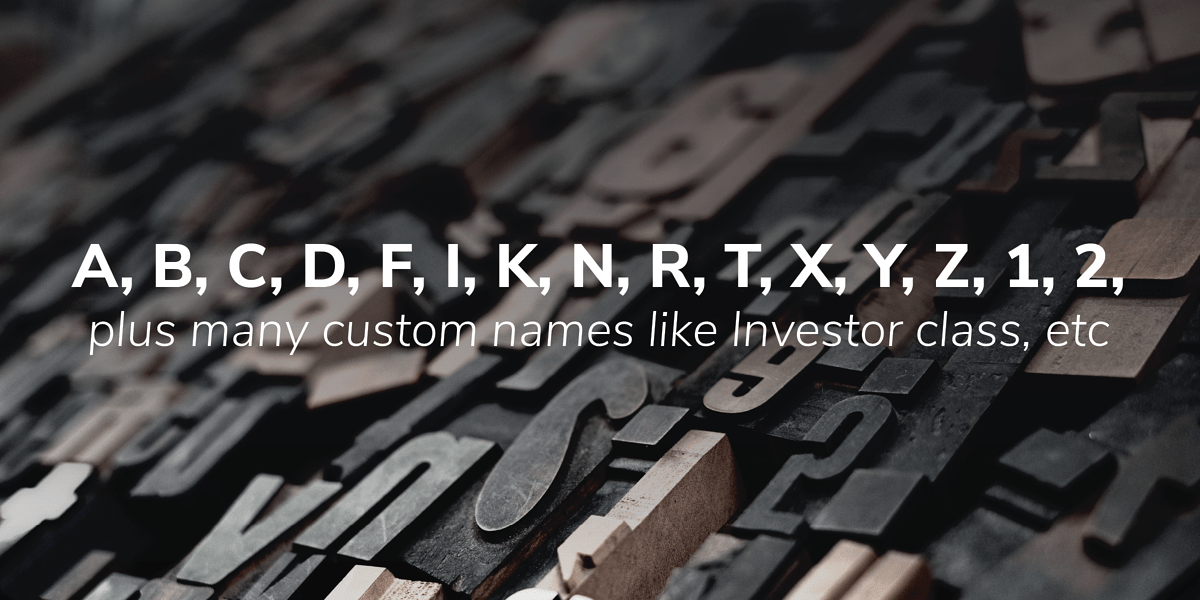 It’s like a terrible lullaby that helps registered reps and financial advisors get to sleep at night!

We first approached this topic near the beginning of Season 2 “Conquer Risk” podcast. While doing additional research as part of our management process, even more share classes jumped up like “K” and “N”. I’ve been in the business since 1995 and I’m still amazed at the lack of share class standardization.

The problem is not just the lack of standardization. It doesn’t matter whether you are a registered rep or a financial advisor – there is a requirement that you choose the appropriate share class or suffer the consequences. FINRA and the SEC both consider share class as an easy target for violations.

In this blog, we will answer questions and educate on the following topics: 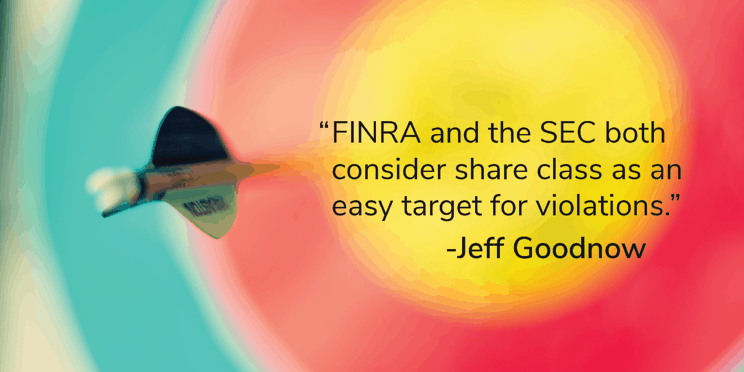 The reason understanding share classes is important is quite simple; regulatory scrutiny.

Rather than one simple institutional share class, most custodians have an ever-changing list of no-transaction-fee funds that may be institutional, load-waived A, or some other iteration. With the SEC, there is a constant responsibility to make sure funds you are buying or holding are the cheapest share class available.

In case you thought this was an easy task, we’ll use PIMCO, who is a great company and has a solid reputation in the marketplace.

Having tickers for the same fund (but different classes) make sense at first…then they got to the Institutional Share and the plan went to hell.

The easiest explanation I can give you for why there are so many share classes is -everybody must get paid. Think about the commission side first. A & C shares were created for 2 different kinds of payment structure, not a different client experience. 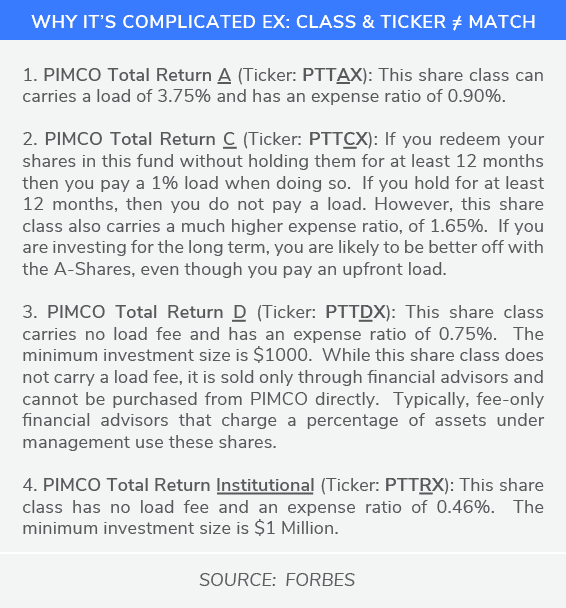 Advisors must be vigilant about making sure new buys as well as old holdings are the cheapest share class for their client portfolios. New share classes or additions to a platform of a lower fee class are created all the time. 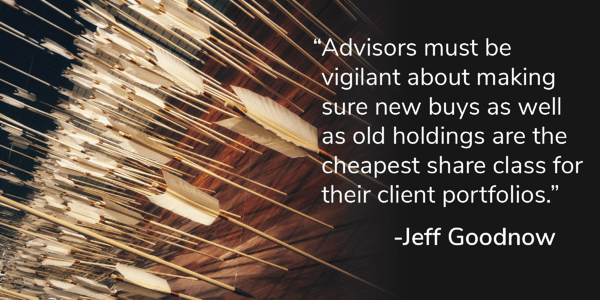 Unfortunately, the road is littered with good intentions. Sometimes, it is a simple mistake like choosing a fund with 12b-1 trail when there is an institutional share available, or a new share class with lower expense is created for a fund that an advisor already holds.

Therefore – advisors charging a fee should have a process in place to review share classes on an ongoing basis.

Even for advisors, those 12b-1 fees that we mentioned earlier can come back to bite you. Originally, they were supposed to be covering marketing expenses and have since been used for covering custodial platform expenses, registered rep trails and more. These can also cause problems for advisors because even if the only class available pays 12b-1 fees to the advisor while they are also charging an advisory fee and don’t disclose…The SEC would like to speak with you.

Then there are Retirement Plans

Lastly, let’s consider retirement plans. Somebody must pay for the record keeping and other plan expenses. Most employers would rather use the “pay to play” method and allow the funds used in the plan by participants to cover expenses. When you couple that with the negotiated registered rep expense – multiple share classes exist to cover these iterations. (Take a look at the “R-Share” example in our breakdown section.) 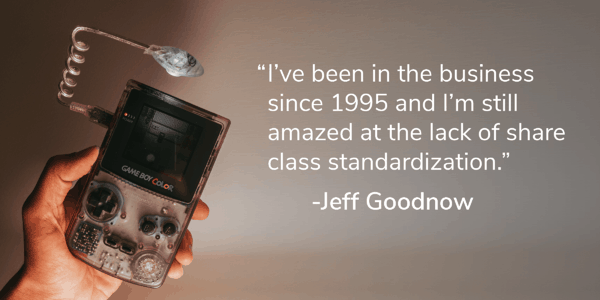 A-Shares – These are primarily for registered reps to use for long-term investors. There is typically a front-end load. This means there is a commission paid from each purchase that goes to the rep and their firm (usually around 5%). Based on the amount of the purchase, a Letter of Intent, or Rights of Accumulation – the commission may be lowered.

These shares can also be used on some advisory platforms as a “load-waived A-Share” and no commission will be paid. It’s really a shortcut to offer a fund without the expense to the mutual fund company of creating an entirely new share class. Expenses will normally be higher than if that fund had an institutional class available.

B-Shares – FINRA has basically killed the use of these a number of years ago. Consider them a hybrid between A & C.

C-Shares – For many years A-Shares were the only option. Eventually, C-Shares were created as a level-load to combat the negative perception of a $1,000 investment only showing $950 invested. It appeared to some as “being behind the 8-ball” right out of the gate. As mentioned earlier, it was also the intention that C-Shares were for investors with a shorter investment horizon and making up that 5% in just a few years is tougher.

There typically is no conversion to an A-Share feature like the old B-Shares offered. Because commissions of generally 1% were paid from the internal fund expenses, the total expenses of a C-Share are considerably higher than most sister A-Share funds. That is the primary reason for them to be a short-term solution.

F-Shares or “D-Shares”, etc. – These are primarily no-load funds that were offered through discount brokerage houses or internet supermarkets. There isn’t typically any upfront fee, but often there is a 12b-1 fee and/or a trail of some sort that pays to the rep. Since most financial professionals are familiar with American Funds – they have several iterations of F-Shares that can be considered sub-classes (we’ll discuss this in the R-Share section).

I-Shares – Institutional Shares are the most popular to use by advisors. Typically, they will have the least expensive internal fund expense because they were built to have no compensation built in to pay advisors. While the fund company may share some of the fund expense with a platform for distribution purposes, it remains less expensive then nearly all other fund classes.

However, unless these are used in advisory accounts where the minimum may be waived, it isn’t unusual at all to see minimum investment amounts to be $1 Million for individual investors on their own.

No-Load-Shares (Investor Class, etc.) – No load companies originally created this class for the purpose of going direct to the consumer. Years ago, I worked for American Century who only had No-Load-Shares because they were not compensating any outside firms or advisors. They made their money on the internal mutual fund expense and that is all.

Technically, this isn’t a class. However, to segregate them in discussions, call them No-Load. The internal expenses on most no-loads are reasonably low which is great for DIY investors. 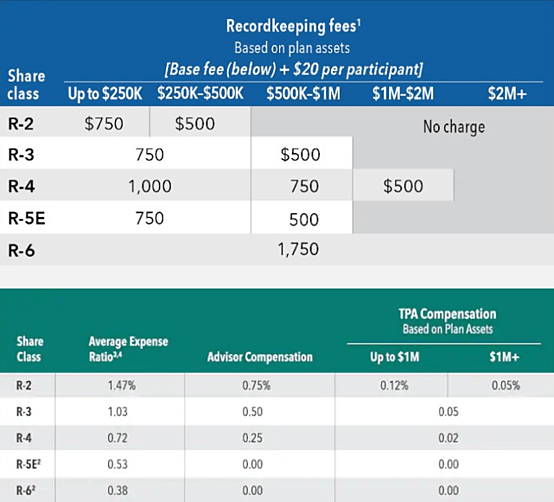 R-Shares (and other Retirement iterations like “K”) – R-Shares were created to help pay for the record keeping and commission needed in the retirement plan space. An example is American Funds R-Share iterations that cover different amounts of plan expenses and compensation for registered reps and (or lack thereof) for advisors who can add a wrap fee. These are normally only available for employer sponsored plans.

This table is an example from American Funds “R-Shares”.

Sub Class-Shares:  Now is a good time to discuss sub classes. R-Shares are the perfect example as shown in the graphic above. R1, R2, R3, etc. The participants don’t really have a choice as the employer and the financial professional have made the determination at the plan level. As you can see above, the internal fees can vary widely.

Z-Shares:  While most don’t see this class often, Z-Shares are typically offered to employees of a mutual fund company. Consider them restricted from the general population and only available for purchase or perhaps part of employee compensation. It’s an in-house benefit!

There are more! If you have trouble sleeping or haven’t seen a class we’ve written about, you can always go find unique share classes and who offers them on the MarketWatch website.

Here’s what we do know. There are way too many share classes to have a comprehensive list. There are more being created every day!

In our podcast, Manish Khatta discussed his excitement around Fidelity’s brand new iNTF platform which allows fund companies to offer their most stripped-down institutional shares to advisory clients.

Personally, I think we will see some consolidation and can only hope for the standardization of share classes.

We hope that our references help you make some sense of the true volume of what there is out there, why are out there, and why it’s important that you understand them.